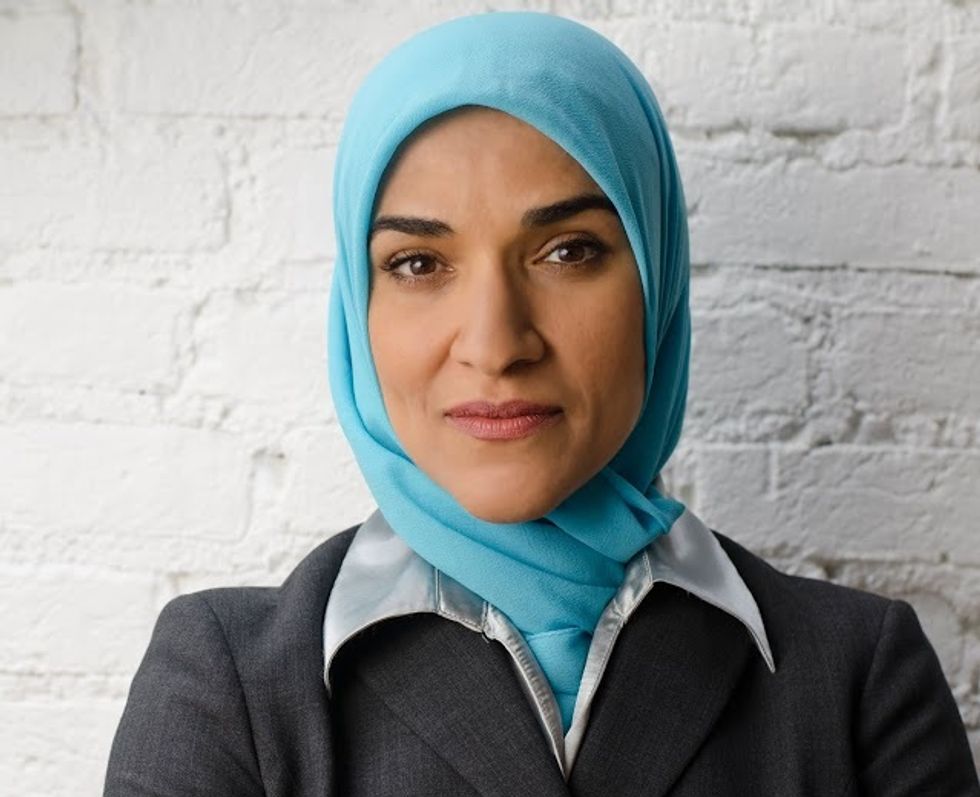 Dalia Mogahed answers our questions about the American Muslim community and the upcoming presidential election.

Dalia Mogahed is a go-to source on Muslim-American relations, particularly in her capacity as the Director of Research at the Institute for Social Policy and Understanding in Washington, D.C. Last month, the Egyptian-born scholar and author sat down with Trevor Noah on The Daily Show to discuss the American Muslim community.

“I think there’s a lot of misunderstanding,” Mogahed told Noah on why American Muslims “aren’t welcomed.” One example she uses is the false narrative around radicalization and what causes it. “Going to a mosque, attending a mosque regularly, is linked with greater civic engagement and more tolerant views of people of other faiths,” she says. “Where people get radicalized is the internet.”

Mogahed also weighed in on the western media’s coverage of terrorism. “When you look at, not terrorism, but media coverage of terrorism, that’s where you find the vast majority of terrorists in the media are Muslim, but not in the real world.” She added, “when we fall into this kind of fear mongering, it hurts everybody. It doesn’t just hurt Muslims.”

In the phone conversation below, Ms. Mogahed answers our own questions about her work at the Institute for Social Policy and Understanding, the upcoming U.S. presidential election and the important connection between American Muslims and Black Lives Matters.

Okayafrica: What are you working on right now at the Institute for Social Policy and Understanding?

Dalia Mogahed: We're working on a number of projects. One, and I think this is really exciting, is we're doing a research project on the American Muslim community and the upcoming election. We're looking at what are their policy priorities, what is the case for them to be engaged despite their small numbers, and maybe a degree of apathy and disenchantment with some of the rhetoric. We’re also [looking at] some success stories on globalization from other communities that the American Muslim community can learn from.

Another major project is we're studying what makes a vibrant and inclusive mosque. It's really a project that's trying to upgrade the religious institutions of Muslims in America to make them more engaging for young people, women and converts.

And finally, we are getting ready to do a national opinion poll of different faith communities in America, including American Muslims.

What worries you about the rhetoric around the upcoming election?

I think the most unsettling aspect of the rhetoric around this upcoming election is the fact that it is so extreme and so openly bigoted, and yet there seems to be such a large number of people that it’s appealing to. It's not that I’m worried about these policies actually being enacted. I don't actually think they will be, but what really disturbs me is how bigotry is becoming normalized. When that happens, it impacts not just one group, but all minority groups. When you look at some of the impact of the recent rhetoric, we find that there has been a surge in anti-Muslim as well as anti-Latino hate crimes. So this is not an issue that impacts just one group. It really is something that any American concerned about the civil liberties of Americans in general should be worried about.

Dalia Mogahed sits down with Trevor Noah on The Daily Show

Do you see any ties between the Islamic social justice movement in the U.S. and the Black Lives Matter movement?

I think that there is a very important connection between the Black Lives Matter movement and the movement to resist anti-Muslim bigotry. I think that the core problem that animates the violence in both cases is common. In both cases, it is about an unchecked hate. It is about the lack of accountability for unchecked hate, and people being motivated by a biased view of their fellow Americans. I want to emphasize, though, though there are commonalities, this is certainly not to equate the two, and I think that the Black Lives Matter movement is much bigger, much more serious, and really deserves the attention that we're giving it, and much more. So this is not to make a false comparison or parallel between the two.

What do you think Islam and Muslim immigrants in the U.S. mean for the presidential campaign?

Before I go any further, I think just to clarify, American Muslims are a very diverse community, and the largest group are in fact African Americans. They make up about a third of the American Muslim community. So, it is not just an immigrant community. It’s a community of people of really all backgrounds.

As a community, there is a lot of diversity in terms of policy priorities. The one thing that everyone agrees on is the need to push back against Islamophobic rhetoric, which then turns into Islamophobic legislation.

This issue has created a platform for all American Muslims to stand up and say, "Not in our country."

It's a great question. What we're finding is that what people want more than anything else is to feel welcome, is to feel like it's a place where they can bring their whole self, and they will be accepted. We have a number of recommendations that we'll be coming out with, but really most importantly is mosques have to offer platforms for people to organize their own programming. They need to create space where a person, whoever they may be, can find a sense of community rather than just a place to pray. I think that’s kind of the most important thing we’re finding. A mosque is much more than a sacred space, although this is quite important. It’s also a place for community. If it's not meeting the needs of people as they look for that companionship, then you'll find that fewer and fewer people will be engaged.

What are some of the issues within mosques that have led you to that research?

What led us to that research is that more and more young people and women and new Muslim converts are saying that they just feel alienated in many American mosques, that they just feel that they’re not finding themselves. The sermons are not relevant to their real life issues, that mosques are not meeting the needs of these people, this group, this demographic, and really in every way they are the future, young people, women, converts. If mosques don't figure out how to address these needs and include these communities of people, they will very quickly become irrelevant.

This is really an attempt to be introspective and help the community develop and build capacity so that it can stay vibrant. The other angle, though, is that the mosques matter. Going to a mosque is linked to lots of really positive things, like better mental health outcomes, lower anger, lower depression. It also is linked to higher civic engagement, more tolerant views of people in other space. Society benefits when mosques work well, and that’s another reason that we thought this research would be important.

What are you optimistic about in 2016?

I am optimistic because I see new alliances being built between communities that weren't working together as much as they should have been. I'm really heartened by the idea that the Black Lives Matter movement in some ways are interested in finding common cause with the American Muslim community. I think that that alliance is very natural and overdue. I'm optimistic that people more and more are aware of the challenges that we face as a country in terms of racism, police brutality, Islamophobia, and I think that the first step in addressing these issues is to recognize they exist. None of these things are new, but finally people are aware of them, and I think that is cause for optimism.

Have you seen that kind of alliance anywhere else in the world?

I think it is really interesting. I was born in Egypt, and Egypt had a revolution in 2011, and it was started in response to police brutality. It was a young man who had been beat to death by the police, and his picture was circulated on Facebook. And it's not that police brutality in Egypt was a new thing, but finally there was awareness. And then when young people rose up, first against police brutality and then to just wanting to change government all together, they had to find alliances between people that weren't talking to each other, that weren't necessarily natural allies.

That's where I really see a parallel in some ways, in that these incidences of citizens being killed unjustly by the police were the spark to a much wider movement.

How would you define that wider movement?

I think that wider movement was one at the time of people demanding dignity and freedom. In deciding that, they were no longer going to let fear control them. Whether they were Muslims or Christians or liberals or conservatives, they have that in common and they were able to work together, put their differences aside and accomplish something that the world thought was impossible to do, the removal of then President Mubarak, through just a few weeks of peaceful protest.