This Cape Town Rapper Combines Photography & Soulful Beats In Her New EP, 'This Audio Is Visual' 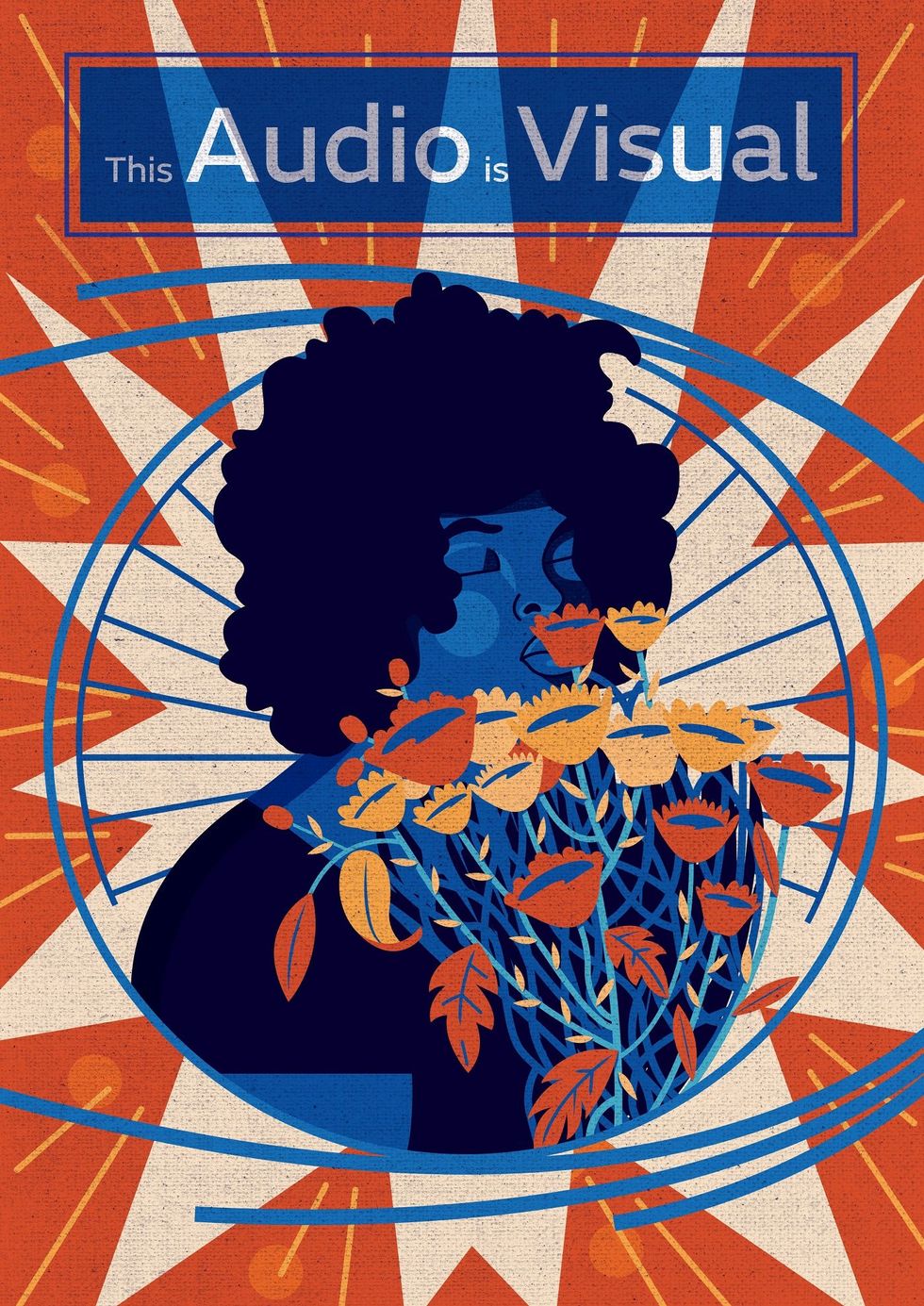 Andy Mkosi's new EP, 'This Audio Is Visual,' is no regular release.

About five years ago, when no one was booking her and her musician friend OBie Mavuso, they started the live events series Jam That Session. JTS grew to be one of the most notable music events in the Mother City, and has hosted artists like Zoe Modiga, Nakhane Toure, YoungstaCPT, among others. It has now grown further into a platform for Andy Mkosi to release her music through.

About a year ago, Andy felt that performing in clubs wasn’t for her. So she started the Bedroom Tour—she put up a callout to her fans to invite her and her band to come perform for them in their houses. The Bedroom Tour was a success; it had a few stops in Cape Town in 2016, and earlier this year she took it to Johannesburg.

The artist’s latest EP, This Audio Is Visual, is no regular release. She combined her photography skills with music—she has a visual representation for each song on the project, to assist the listener's understanding of the songs. For it, she worked closely with the photographer Tsoku Maela.

The EP is accompanied by a lyric book, which has the visual presentation of the songs, a gallery of her Bedroom Tour, and a beautiful poem by Naledi Raba, among other things.

The production is also different to her previous work—which was mostly conventional boom bap. On this projection, the boom bap and soul sensibilities are still there, but the beats are more experimental—you’ll hear some pads and 808s, which give her voice a fitting environment to float through. She worked with different producers, which she introduces us to in the booklet.

Below, we talk to the artist about combining her music with photography, collaboration, her passion for rapping, and more.

Please explain the idea of mixing music with visuals. How did it come about and what are you hoping to achieve with that?

For some few years, I was frustrated with my photography. I just did not know where I fitted in the bigger scheme of it. As a result I stopped making images for some time. I remember meeting with Ma'Lindeka Qampi, who is also a photographer and venting to her about my dilemma. She is the one who inspired the idea of mixing visuals with music. What she basically made me realized is that I might be at an advantage with these two skill sets and that they need not exist as separates.

The bigger idea is to get people to hear, see and feel. We understand in different ways some by seeing others listening. This just another way for me to get people to engage with my content more. Sometimes I feel people are also really not listening to what I am saying in my music because I share a lot on music. So if you won’t listen, please look at least, you know? Accommodating attention spans too.

You sing a lot and do a lot of spoken on this project. Do you ever see yourself dropping rap altogether and just being, in your words, a musician?

[Laughs] I actually love rap, shame. So no, but what I would love to try out, though, is a project with just singing. Just to be deep about things, I don’t think I think when I sing, and I love that. I freestyle better when I sing, too. Thanks to Tatenda for making me find the comfort and confidence in singing. I really enjoy making music with producers who play live instruments. It provides that freedom.

You are an introvert yet a very big collaborator. Can you explain that dynamic?

I love working with people. Also I am lucky in the sense that most times people take a liking to my character first. No one wants to work with assholes. I can be one and I am one, but I know when not to let the ass out of the hole (wtf am I even saying?). But most times these come from hitting people up on the internet. I have no shame when I want something. The internet has made it easier for us introverts to just hit people up.

Feeling so sick this Monday but this is keeping me afloat.Sharing my Lyric Booklet this week. A book which compromises of images which are direct visual intepretations of the messages on my EP #ThisAudioIsVisual. Also serves as a THANK YOU to everyone who was involved in the production of the actual booklet and EP. Illustration : @Thandiworld

How did you get to work with Tsoku, and how was the experience?

Tsoku and I wanted to work together on iPressure already on a video collaboration, but that never happened. Randomly last year he emailed me and said he was planning on venturing into artworks for musicians, and that I should hit him up whenever I had something. So when I wrapped up the recording of the EP, I followed up and we started brainstorming.

The experience was great. There’s nothing more lovely than working with people who are as equally excited as you are about your work. That was the general consensus with everyone I collaborated with on this EP

You also use more Xhosa in your lyrics than you used to. Was that a conscious decision?

I don’t really think it was. There are some things that cannot be interpreted from Xhosa to English, and that’s the basic reason Xhosa is predominant in some parts. The message was stronger in my mother tongue; English sometimes has the power to weaken phrases. I did not want that.

“90s Baby” is quite a politically-charged song. What do you make of all that is happening in the country right now?

Hmm. Interesting times really. We are at the tip of the iceberg.

On the song “Standards,” you say you are “too cool for the woke, too woke for the cool kids.” What do you mean by that?

I just feel like I am a socially awkward person. Sometimes when I am around woke or opinionated people who use these bombastic terms, I am always lost, in a good way. When I’m around individuals who are not opinionated about anything, I become bothered by that. It’s also a nudge at the clique culture in Cape Town. I have managed to be a fly on the wall in most of these circles, because I move mostly as an individual. I don’t belong to any, but belong to all of them at the same time.

Can you take us through your thought process when making the images to interpret the songs?

It’s no particular one. Sometimes it’s scripted and plotted, other times it just comes to me when I'm not even trying to make an image for the song. When it's scripted it’s mostly taken one bold theme in the song and exploring that concept visually.

What are the challenges of making your kind of music in Cape Town?

People are not listening. That’s the challenge for me now, and when I say listening, I am not referring to people boosting my plays on SoundCloud. No. But people are just not listening to the messages, and that’s why it’s really important for me to share these lyrics on this booklet. Cape Town only listens or pays attention when you are friends with who from where who does what for the why. They listen when they associate you with someone or something.

"People are not listening. That’s the challenge... and when I say listening, I am not referring to people boosting my plays... people are just not listening to the messages, and that’s why it’s really important for me to share these lyrics on this booklet."

Please tell us about your future plans for the Bedroom Tour.

Really excited about this! What’s to come is awesome. I recently teamed up with someone to make these more exciting. Otherwise the next step now is to take it to Durban. I will start crowdfunding in the next few weeks for it. I’m also busy with merchandise for the tour making pillow cases. I teamed up with garment designer Anita Mfinyongo to collaborate on these cases. So really the next step is to make profit out of this beautiful idea.

What else are you working on this year?

Going into studio again soon, with a band this time. While doing that I want to tour the EP via the Bedroom Tour. Also, I'm part of a German exchange program as a South African ambassador and cultural diplomat among other awesome Cape Town artists. It’s an opportunity that came about through Hip Hop Education SA, an organization run by DJ Eazy & DJ Azuhl. I'm just excited for the next chapter.

Below, Andy Mkosi breaks down how she selected the images for each particular song.

This image came before the song. We put it together, with the help of Wandiswa Mesatywa and access to studio resources. It’s a self-portrait. The doek over my face was initially meant to be a play on “This Audio Is Visual"–blindfolding the eyes and visualizing these messages on the EP mentally. But I later decided it matched “Sometimes.”

It was also made on the same day the “Forget” image. Initially when making this one I had “90s Baby” in mind, but upon playing the songs back, it strongly weighed and carried “Anelisa's Spirit” through.

Aaayyyyyyy. This image is so extra bruh. Dramatic. Philela Singama is the subject veiled with the white cloth. The tire around her neck is there to represent the chokehold we sometimes have on ourselves and others.

This is literally an image of a baby I am so fond of at the moment. His name is Anam. My mom used to take care of him when his mom was at work. Dude had just woken up, and I was next to him. The veil made sense, and the sunset light was hitting on his body just the right way.

This a portrait of my grandmother from my mom’s side. It made sense to photograph her because she lost her husband a year or two back, and is still mourning. The idea was to try and channel what the wives of the Marikana miners must be going through, as the song was inspired by that. The closest I could get to that was through my grandmother.

This a bad & boujee image of my tooth gap made by Tsoku Maela. This is how happy and content I am with the work on the EP. The image reflects that, purely. No bullshit.

You can view and download the 'This Audio Is Visual' booklet here.