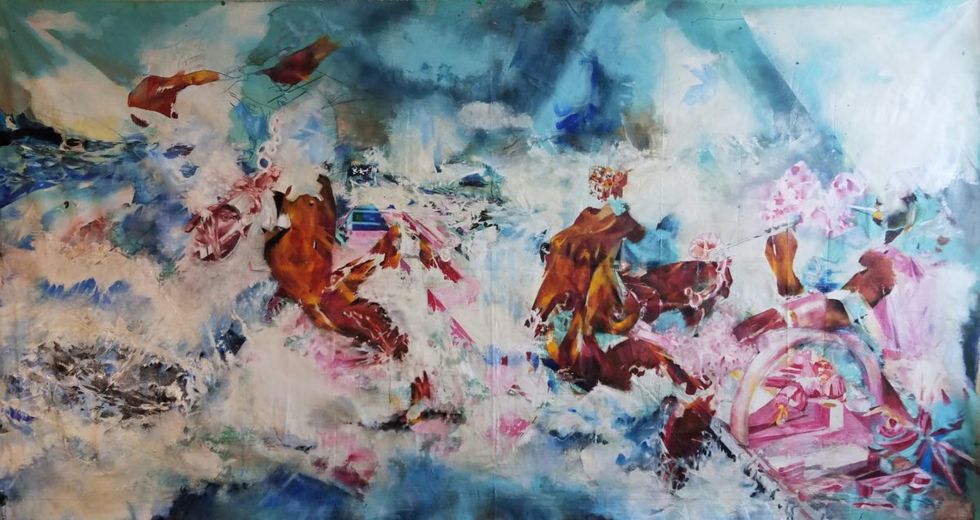 BROOKLYN—Earlier this month we sat down with Ghanaian-American multidisciplinary artist Akwetey Orraca-Tetteh as he opened his exhibition, BLUE STEALin Okay Space.

A multimedia exhibition, BLUE STEAL is drawn from a chapter of his existential narrative, The Birth of Tiro, where he intersects his performative and studio practices introducing a futurist take of liberty and theft.

We catch up with him again as his show is nearing its end date with a video showing the intricate details and textures of his art, as well as his words explaining what BLUE STEAL means to him. The video captures the cool vibes of BLUE STEAL’s opening night with glimpses of fog, beautiful shades of blue and pink, and people in community. We even get to hear Orraca-Tetteh’s original music in the background.

Watch the clip below and read our brief conversation with Orraca-Tetteh’s on artists who influenced his work and his reflections on opening night.

OkayAfrica: Your show BLUE STEAL is winding down very soon, when you reflect back on your opening night at Okay Space, what are your feelings around people’s reactions to your work?

Akwetey Orraca-Tetteh: Since my twin brother and I left NYC to the Bronx only to return years later, I’ve had within me a compulsion to connect to the very ground from which I came into birth. It was an honor to have the company of legendary New York cultural icons, and I did get to met new people—they just happened to be wells of communal spirit and energy. I was feeling as though people were really resonating with each other. My work created a setting for people feel comfortable to speak with each other generally.

OkayAfrica: In our previous conversation, you spoke of the influence creatives like Mr. T and David O. Russell had on your work—who are some other artists that inspired you?

AK: The night that I painted BLUE STEAL, I had gone to the Whitney Museum to see the Fast Forward salon. The salon recapitulated a lot of the turmoil and angst and extremity of the 80s and the existing hangover and resolution from the perspectives from these artists like Ross Bleckner, Moira Dryer and Jean-Michel Basquiat. It paid homage those who were embedded in that era in a very poetic way. Getting to connect with a lot of artists I grew up on, I was super inspired and unapologetically excited when I came to my studio and painted the work within an hour and a half. I then told myself that for me to be able to connect this painting with other people’s perceptions, perhaps I should give pause—an artist has to negotiate at which point one should pause from the work to reflect on what they’re trying to convey.

Water finds its way into a lot of my paintings. Waves speak visually, intricately, pronouncing wordless thoughts—present feelings we can all understand. In this way Whitewater Weekend is an ‘in real life’ reply to Eric Fischl'sA Visit To/ A Visit From/ The Island.

With Whitewater Weekend and the removal of cloth from frame—I want to give the viewer a feel of touch, a synesthesia. El Anatsui's tapestries, Sam Gilliam's draped canvasses, I love these works. They suggest painting as dress, as fabric, a protective cloak of the imagination.