The Artist is Present: Poe is Here to Put Nigerian Rap Back on the Map 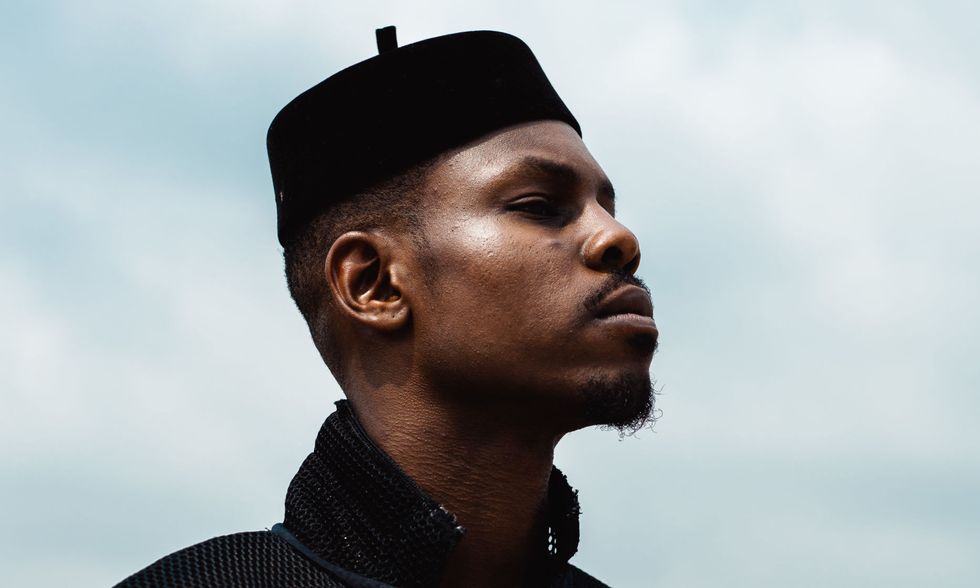 The rising star of Mavins Records discusses his favorite MCs, his love for Atlanta and on making rap-music that resonates with Nigerians.

Poe is lost, says his manager minutes before our scheduled interview at the Member’s Bar of London’s Royal Festival Hall.

The Nigerian rapper is in town to shoot a video for his first big single “Man Already”. He apologises duly though he needn't have. London’s otherwise efficient transport system can often seem like a maze for a visitor.

He wears black denim and sweatshirt and a hat with the words “Paper Boi”, which everyone who has watched Donald Glover’s truly impressive Atlanta will immediately recognise. Poe is a fan and has so far watched three episodes.

He explains that the “Paper Boi” he is wearing is a Black-owned, London based brand that is unrelated to Glover’s series.

Poe, real name Ladipo Eso, is one of new signees, along with Johnny Drille and the DNA Twins, to join Mavins, the pop label run by Don Jazzy.

Poe was introduced to Jazzy by Di’ja who, along with Korede Bello and Reekado Banks, were unveiled in 2014 as the latest batch of Mavinites—all of whom are now stars in their own right.

Meeting Jazzy for the first time was always going to be memorable for the young artist even if all they end up doing is saying “hi and bye”.

Poe recalls walking into the studio, at Di’ja’s behest, and meeting Jazzy and Tiwa Savage—doubling the anxiety no doubt. “I just walked up to him, mumbled some nonsense, shake his hand, shake Tiwa Savage’s hand, and I just find a quiet corner to sit down and I don't say a word for like the next three hours,” Poe recalls.

One pop mogul will intimidate, two at once could make you re-evaluate everything you know about music. But Poe needn’t have worried because of the “family vibe”, and one which “people think that it's an act. It really isn't. They are very cool with being in each other's spaces”.

This could either spur or cripple whoever comes next, assured of success or disabled by fear of failure. Added to this is the fact that Poe is the first rapper ever to sign to Mavins since rebranding, in 2012, from Mo Hits after Jazzy parted ways with D’Banj.

Rap is in an odd place in today’s Nigerian pop. Where it was once cool to mimic American accents and sartorial choices, today rapping in an indigenous Nigerian language and doing so dexterously is what is respectable.

The likes of Phyno, Olamide, LilKesh are testaments to this. The trend has caught on even in Northern Nigeria with newcomers like Classiq, Morell and BOC who rap in Hausa.

Poe’s rise would seem to dispute this. He mostly raps in English but infuses words and phrases in Yoruba and Pidgin. The reason for this, I believe, is mixed in preference and proficiency.

His vocabulary in English is wider than that of his Yoruba, but this isn’t necessarily a drawback as he, along with Show Dem Camp, were building a small but dedicated fanbase before he was plucked by Mavins.

I ask if he wonders if he’s missing out on the indigenous rap wave to which he says, “At one point in time I was concerned but I quickly shook that off because I thought to myself, ‘Well, if the other alternative is to do Igbo rap then I'm not going to be a very good rapper, so I might as well carry on’.

Poe has been recording with the Mavin’s in-house producers one of whom, Altims, produced his first single on the label called “Man Already”—the video for which he has come to shoot in London. “I want a particular kind of look and I'm not accepting any other person” says Poe.

What’s most admirable is just how Poe has made the effort to weave different melodic lines on the same song sometimes padding adlibs with treated vocals, all along tinkering with the title phrase, “I’m the man already, but i’ve been the man already”.

It comes as no surprise that Poe has “found a really strong connection” with Altims who, of all Mavins beat-makers, leans the most on Hip Hop. He credits Babyfresh with “making him feel comfortable” with being a new signee with huge expectations place, like a price, on his head.

The picture of Jazzy which Poe paints here is part-mystic, part-open book, “he'll come in on your studio session, and he won't say anything. He'll just, you know, feel the vibe, nod his head and leave”, only to be told later on by a producer present at the time that Jazzy liked what he heard.

Poe has a quiet self assurance about him. When he speaks, he’s measured but not calculated. His diction betrays his formal education. One shouldn’t go looking for sour spots in people but with Poe, he seems to have little conflict or worry about his art, or any insecurities which he hasn't thought through or decided on how to approach.

He intended to attend festivals like Coachella, “and the reason why is, I'm going on fact-finding, educational missions. I'm trying to open my mind because I feel like in Nigeria I'm not exposed to enough” so as to become a good live performer.

I tell Poe that The Weeknd’s first ever Coachella set in 2012 was poor. He'd been on his great mixtape run and had been doing small shows before he was propelled onto a festival’s stage.

By The Weeknd’s own admission, in an interview on Beats One, he tells of how after this show he asked manager to book him for “100 shows” so as to get better and to wean him off drinking before shows.

Poe doesn’t have any issues with drink and his desire to get better is endearing mainly because one still does not expect a rapper signed to a major label to admit to vulnerabilities or areas for improvement.

This fits neatly into the current rap era that allows for—requires even—a show of emotions, and how this could double as a show of strength. While forebears like LL Cool J have long made career of it, this new emotional wave in hip hop is easily attributed to Drake with a nod to Kanye West’s 808's & Heartbreaks.

Poe, it turns out, is a fan of Drake, and not just in some existential opposition to Kendrick Lamar—a false fault line along which debates about greatness are made.

I ask to know if, in his mind, he differentiates these qualities when learning from them, “Lupe more so for imagination, but I didn't want people to take so long to grasp what I was trying to say. I needed them to get it immediately”—not a concern of Fiasco’s who despite titling one of his standout songs “Dumb It Down” goes on to write intentionally obtuse verses as though they were Morse Code.

To Poe, El Zhi’s “punchlines are consistent” and Phonte “a master of wits and wordplay”. He goes on to quote a knotted simile of Phonte’s which, in the moment, I was unable to untangle, even with a little help from his manager who sat through the interview.

Nigeria’s M.I and Ghana’s Sarkodie are another two rappers who Poe rates highly both of whom he saw perform at One Africa Fest held the weekend before our interview.

For some crew love that doubles honest opinion, Poe also credits Ghost and Tec from his old group Show Dem Camp as two of the best rappers he’s ever heard.

I ask how members of SDC feel about his being drafted into the “big leagues” and he’s more than convinced that they’ve given him their blessing. He was never a full member of SDC but the group greatly shaped his formative years before Mavins came calling.

Poe claims to be unfazed by his being the first rapper signed to the most successful record label in this new afropop era. He believes he’s done considerable “groundwork” with SDC leaving it to Mavins “to put more eyes, more ears. More eyes, more ears, platform and take it to the next level”.