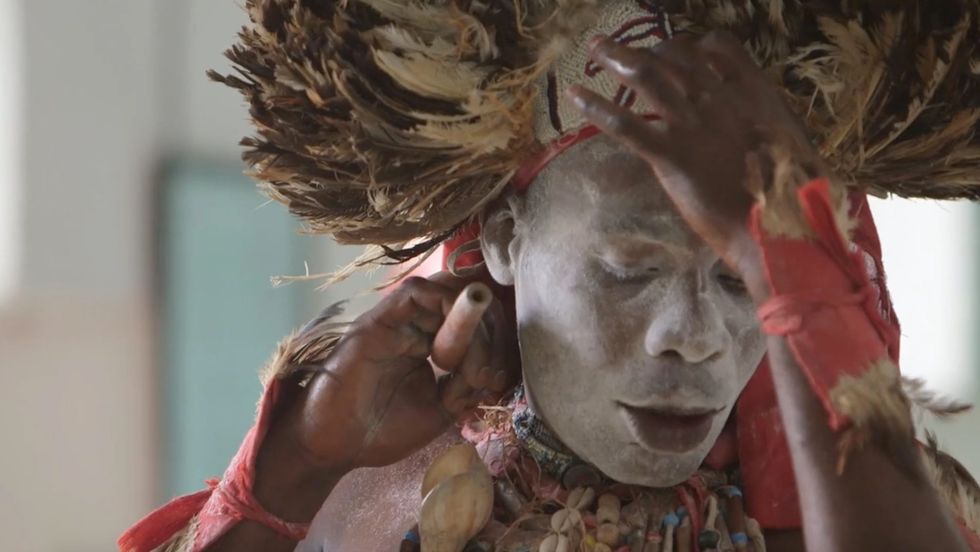 The Smithsonian's National Museum of African Art is set to premiere 'Arts of the Monsoon' in Washington, D.C. this weekend.

When you arrive on the Swahili coast, it feels like a different world from the savanna landscapes or the booming cities of Nairobi or Dar es Salaam that dominate East Africa’s travel guidebooks. The acacia-dotted savannas are replaced by palm trees and mangoes. Instead of the experimental, futuristic design of postcolonial cities, visitors find heavy wooden teak doors and windows dating back centuries.

Arts of the Monsoon, a new documentary film commissioned by the Smithsonian’s National Museum of African Art, takes viewers into the traditions of this unique corner of the world by exploring the connections between Zanzibar and Oman through the eyes of musicians, artists, and cultural experts.

At first glance, I’m intrigued by the film, which explores an area that is foreign yet familiar. I spent idyllic childhood summers in Mombasa, watching the dhows (fishing boats) cut through the sparkling waters of the Indian Ocean, wandering its labyrinthine streets, the smell of fresh coconut-infused pilau with its rich medley of cardamom, turmeric, and cloves wafted through the air. Today, separatist and terror activity has left the city a shell of its former self. The same story plagues Lamu, one of Kenya’s oldest town and one of the first Swahili settlements. Despite occasional bouts of violence, Zanzibar remains the last true gem of the Swahili coast.

While the stories of Portuguese and British colonialism are by now familiar and well recorded, the Sultanate of Zanzibar, the Omani colonial commercial empire that controlled the maritime Silk Road from the 17th to 19th centuries, is less commonly explored in the history books. Separated from its Gulf neighbors by the vast expanses of desert and maritime borders, Oman took to the seas and forged connections more with East Africa than with its Arab neighbors. Over hundreds of years, trade between the isolated Gulf state and East Africa produced a distinctive cultural fusion that still exists today.

Arts of the Monsoon is connected to a larger exhibition at the National Museum of African Art funded by a $1.8 million gift from the Sultan Qaboos Cultural Center in Washington, D.C., an educational institution seeking to promote cross-cultural dialogue between Oman and the United States. Launched in 2013, the multi-year education program, “Connecting the Gems of the Indian Ocean: From Oman to East Africa,” highlights the evolution of Omani arts and cultures, the beauty of the arts in Oman and its connections to the East African Coast.

In a scene recorded in the port city Sur, filmmaker Dodge Billingsley shows Omani dancers in long, flowing white robes beating drums then transports viewers back across the ocean to hear taarab, traditional Zanzibari music that combines Arab scales with African rhythms. Elsewhere, we find other juxtapositions—the Swahili kanga, a traditional cloth worn by women on the streets of Zanzibar’s Stone Town and Oman’s Salalah, and the clove carvings on doors of Stone Town, Muscat and Mizanfah recalling the region’s long history of spice trade.

“When you say Africa and Oman, they are like twins,” professes one artisan in the film, as he leads viewers through the maze-like markets of Muscat. Indeed, throughout the film we meet Zanzibar-born Omanis who switch between Arabic, Swahili, and English effortlessly—fluent in both the language and rituals of Oman and the coast. The word “Swahili” itself even comes from sawahil in Arabic, meaning “coast.”

In the Western world, media and academia often focus on West Africa and its postcolonial history, neglecting the rich history of the great empires of Mali and Songhai—or the rich and complex cultural exchanges of the Indian Ocean world. Arts of the Monsoon dispels the narrative of a “dark continent”—re-shaping our understanding of the continent and its centuries-long influences throughout Asia and the Middle East.

Join the Smithsonian's National Museum of African Art for the public premiere of 'Arts of the Monsoon' on Saturday, June 11, at 2:00 p.m. with a Q&A session with executive producer, Nicole D. Shivers, to follow. Register for free here.