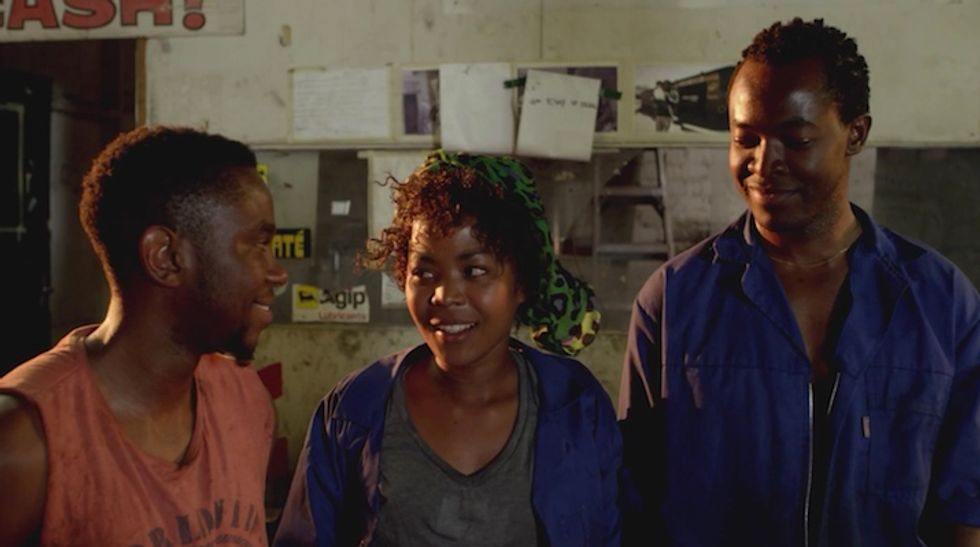 Ayanda is a forthcoming South African coming-of-age story whose title character embarks on a journey of self-discovery in the male-dominated world of auto repair. The film's synopsis describes Ayanda as a "21-year old Afro-hipster" who fights to preserve her father's auto repair shop from being sold eight years after his death. As she handles the business of reviving the shop, Ayanda must come to terms with her father's legacy and her own personal growth.

The feature uses the device of a film-within-a-film to offer a glimpse into a vibrant and diverse Johannesburg community of African migrants from across the continent while offering a meditation on gender stereotypes and human relationships. Ayanda, directed by filmmaker Sara Blecher (Otelo Burning), stars South African actress Fulu Mugovhani as Ayanda, and Nigeria's OC Ukeje (Confusion Na Wa) as her love interest, David. Rounding out the cast are Ntathi Moshesh, Kenneth Nkosi, Jafta Mamabola, Thomas Gumede, Sihle Xaba and Venessa Cooke.

Ayanda, which premiered last month at the Los Angeles Film Festival, was recently selected as the opening film of the 36th Durban International Film Festival. Watch the trailer, and see below for the film's official synopsis. Keep up with Ayanda on Facebook and Twitter.

"In a community vibrant with migrants from across the African Continent, against the backdrop of unspoken love, a young woman tries to navigate a path for herself. But this is a world where everything keeps shifting... Everything except the one thing that really does need to change. Ayanda and the Mechanic is a coming of age story of a twenty one year old Afro hipster, who embarks on a journey of self discovery trying to keep the memory of her father alive, when she's thrown into a world of greasy overalls, gender stereotypes and abandoned vintage cars in need of a young woman's re inventive touch who tries to reclaim what would've been, what could've been."