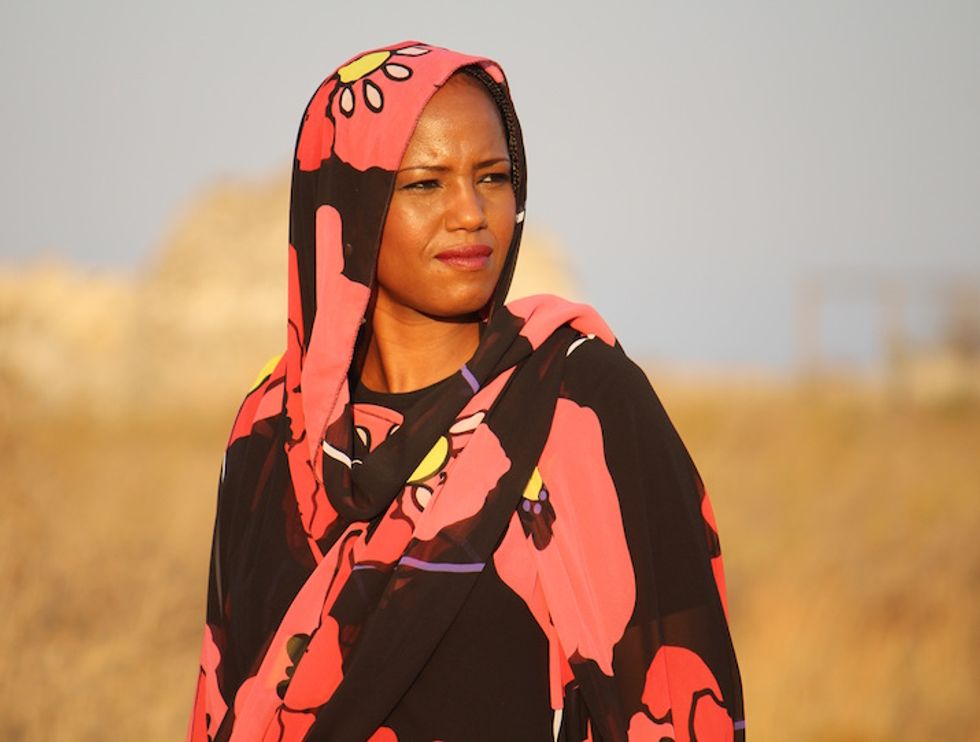 Aziza Brahim has lived her life between exile and displacement. The Western Saharan musician and activist was raised in a Saharawi refugee camp in the Algerian desert. She was forced to flee her home after Morocco’s 1975 invasion of Western Sahara, relocating to Cuba as a teenager and, eventually, settling in her adopted home of Barcelona.

Brahim’s latest album Abbar el Hamada (Across the Hamada) is named after the inhospitable desert on the Algerian and Western Saharan border where thousands of Saharawis live in refugee camps. The album is made up of deeply-political songs about Western Sahara’s decades of suffering and injustice that incorporate Saharawi rhythms, West African drum work, Mediterranean sounds, Afro-Cuban inflections and Spanish influences.

We spoke with Brahim about growing up in a refugee camp, her political identity, and the message behind her new album. Read our conversation below and stream our premiere of her Abbar el Hamada mixtape.

Abbar el Hamada is about the long ongoing Saharawi refugee situation but it feels like it could also be about the European refugee crisis, what was the inspiration behind the album's concept?

Aziza Brahim: The inspirations behind Abbar el Hamada are my thoughts about the situation of the Saharawis after 40 years of illegal occupation and exile. We share similar concerns (the loss and search for home, the consequences of war) with the current refugees, so it is not strange that the songs also echo the European refugee crisis.

Can you tell us about your youth in a Saharawi refugee camp? How has it shaped your music?

I was raised thinking that the refugee camps were my country. After years, I realized what the actual situation was and I felt hungry because I had never been in our homeland. It is a very curious situation for a child. I think the lack of almost everything else caused my love for music, because most of my childhood games were musical contests between me and my sisters to win awards given by the family jury. The will to report the unfair situation of my people has fundamentally shaped my music and lyrics.

You lived in exile in Cuba and Barcelona. Have those cultures influenced your songwriting? We noticed some of the song titles on the album are in Spanish.

Of course, I have lived in a few places and I always have my ears attentive to the music of these different countries. I take the elements I prefer and try to mix them with the sounds of my own country's music. If some titles are in Spanish it's because this language was official a time ago in Western Sahara when it was a Spanish colony.

How do you bring together the Saharawi, Algerian, Afro-Cuban and Spanish musical influences heard on your songs?

As I said, I try to mix some elements of different sounds in order to create new music. Normally, I begin with a rhythm that belongs to El Haul music and I add the influences that I prefer on top of this.

Your songs are intrinsically political. Is there a message you’d like audiences to take away from Abbar el Hamada?

For us, the Saharawis, even to dress in the mehlfa (typical Saharawi dress) or to declare our identity is a political act. But, I think that in this album the political message is also absorbed by the poetic lyrics. I would like audiences to listen to the album and enjoy it. They can come to the conclusions on their own.

'Abbar el Hamada (Across the Hamada)' is available now through Glitterbeat Records.