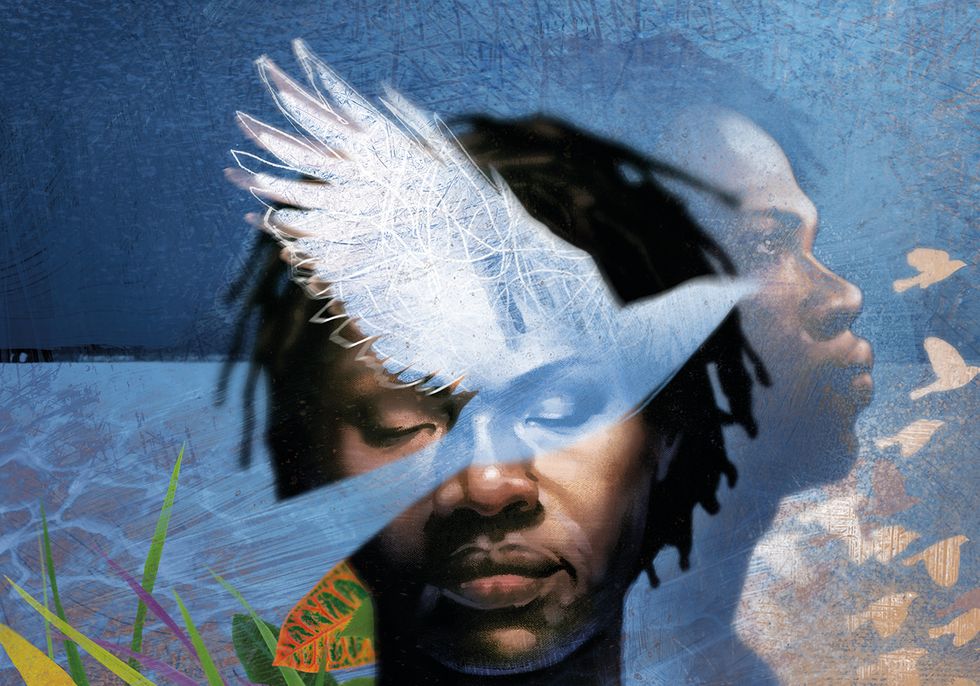 Baaba Maal talks about working with Johan Hugo (The Very Best) and members of Mumford & Sons on his new album 'The Traveller.'

Baaba Maal in London, 2015. Photo courtesy of the artist.

Senegal’s 62-year-old musical icon, Baaba Maal, a man largely known for his delicate acoustic compositions, goes electronic for his new album 'The Traveller.' He teamed up with Johan Hugo, the producer and multi-instrumentalist behind The Very Best, to compose 12 songs that combine Maal’s soaring Fulani vocal melodies with auto-tune and imposing pop beats.

'The Traveller' was recorded between sessions at Baaba Maal’s home in Podor, Senegal and London. Last month, I spoke with the Senegalese guitarist through an unstable Skype connection about this new step in his sound. We talked about his decision to collaborate with Mumford & Sons’ Winston Marshall and Seye, as well as his desire for the album to not be seen as “just African music.”

In many ways, the songs on The Traveller feel like they belong next to water. How has being born to a family of fishermen influenced your songwriting?

Baaba Maal: It’s a good question, because in these parts of Senegal the most popular music is performed by fishermen. Fishing communities are connected to everyone, and they are natural entertainers—natural travelers. Fishermen see so many people passing by, bringing their culture.

It's common to see musicians who appreciate each other have a rendezvous for three or four days in a village. Every night they will play naturally, not to write something, just to do the job. Music is the job. At the end of the day many songs come out from that.

These songs travel also, from village to village, and are repeated. Some other people add some other elements in the song. The song may come back transformed into something really nice, because it's become the song of everyone, a song written by everyone.

That really comes through in this album and your previous work.

Exactly. It's very West African. Now we have television, we have internet, but before, musicians made themselves known by traveling. When they arrived in a village, the first people they met would say, "Welcome to my house, stay here as long as you want." It's a big community with a lot of sharing.

Where did the initial idea for The Traveller come from?

I met Johan Hugo from The Very Best maybe two years ago during the Africa Express project. At that time I was just trying to see what was going to be my next album after Television. We became friends and exchanged ideas about collaboration.

I said to him I wanted to write some songs, not for an album, but just to write some songs. We started at the studio, and then I invited him and some other musicians like Winston Marshall from Mumford & Sons to play the Blues du Fleuve Festival (Blues of the River Festival) festival here in Senegal. Johan stayed in Senegal after and we decide to write some songs together. It eventually turned into an album.

I wrote the lyrics and melody for maybe 70 percent of the album. The rest comes from ideas that Johan gave to me while playing a kind of organ. [The organ] is something very European and very British, but at the same time, it's something I think an African voice can really match on top of.

An album is built on melody. That’s what I’m looking for. I'm looking to write songs that travel from continent to continent, travel from style to style, picking up the soul of the music itself.

It is just music. Musicians, when they appreciate each other, write things down. They don't think about a continent or about moving themselves to another space. [They just think about] the voice, the singing, “is it still me?” The guitar in The Traveller is very African, and the melodies of the songs are very Senegalese. But at the same time, it is very modern, it's very human, you know. From the soul.

What was the recording process like? I read that you recorded the album in both London and Senegal?

We started it here in Senegal. Like I said, after the festival we had just three days in my house, and wrote some first steps of 4 or 5 songs, and then moved things to London. Then Johan said, "Let's travel.” He came to Senegal to stay for nearly one month with Seye, who plays bass on some of the songs. We wanted to have an African environment, and this is where we bought all of this percussion like the sabar, the talking drum, and the djembes, which are really the sounds of Africa. But Johan twisted them a little bit to make it more universal. You have to listen carefully so you can hear it's really just African sounds originally.

Where in Senegal did you record it exactly?

It's all in my house. I have a studio there. For some of these instruments, you need a very big room, or you do it just outside. For example, if you have 20 pieces of percussion, you go outside with them and put up a lot of microphones. It gives you a new sound. The choir, it's kind of a gospel or Christian choir that you have in “Gilli Men,” was also done the same way.

This is all in Dakar?

Yes, it's a just outside of Dakar in a very calm, and very small, cultural village. I did some recording there with “War.” Also, [2001’s] Missing You (Mi Yeewnii) was 90 percent recorded there and finished in London.

Speaking of Dakar, in songs like “Fulani Rock” you mention that you want to represent your people.

Yeah, “Fulani Rock” is a song that I really, really like because of the kind of guitar and drum machine that it uses but also because of the lyrics. The words in that song talk about how important it is to sing in our traditional African languages. Language is not just communication between people, it’s also a gift that we want to give to the younger generation so that they can feel close to their culture.

If you had a message that you'd like for your audience to receive from the album, what would it be?

How do you feel Fulani people influenced this album?

This journey comes from the album Television, and is much more of a collaboration than Television. But at the same time, it's for me.

I want people to know that this is not just African music. It's just songs that have been written for people, wherever they are, whoever they are, for them to to close their eyes and listen or dance to them.

The Traveller is out January 15 and available now on iTunes.