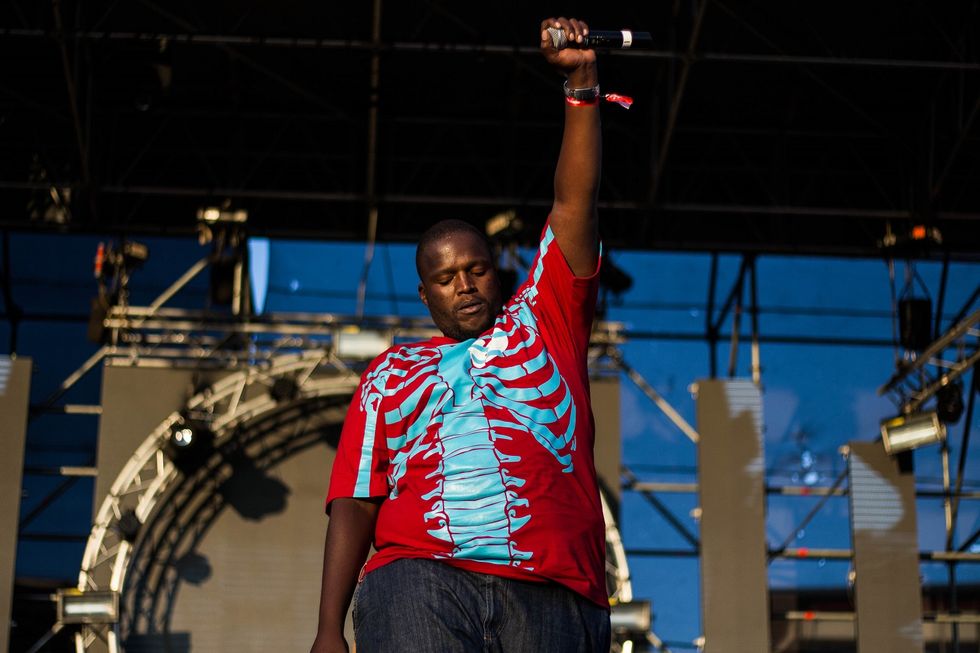 A complete breakdown of South African hip-hop festival Back To The City.

On Wednesday, South Africa’s Freedom Day, Mary Fitzgerald Square in Newtown, Johannesburg became a hip-hop haven for the tenth year in a row. The 2016 Back To The City Festival attracted 25,000 strong to witness hip-hop in all of its forms––rap, graffiti, deejaying, dance, skateboarding and everything in between.

Heads from all corners of South Africa piled in to feast on what the festival had to offer. There was something for everyone, which was a blessing and a curse in that it was hard to see everything. My focus was on the main stage. Below are ten of my personal highlights.

“I was on the Back To The City stage before there was even a stage,” said Reason during his set. The rapper has been on the festival’s lineup every year since its inception ten years ago. To celebrate that, Reason did the unthinkable––he brought about 20 emcees (Boy Wonder, Youngsta, Patty Monroe, Rouge, Kommanda Obbz, Priddy Ugly and more) to each drop an eight-bar verse on his single “Yipi Kayay.” It became a cipher, “ooh!”s coming from every part of the audience with every punchline that was dropped. Reason’s performance was different from what he usually does. He put an effort to his set. He woke up from a mattress on stage, performed “No Sleep” and “2 Cups Shakur,” and after brought a drum for his “Brand New” song, before doing the “Yipi Kayay” live remix.

Emcees line up to drop a verse over “Yipi Kayay.” Photo: Sabelo Mkhabela

Youngsta’s set was in the afternoon, when the audience was less receptive––pacing by between stalls and buying beers. But the Cape Town rapper’s stage presence demanded attention. His clear enunciation and audible voice projection made sure his Cape Town slang was heard, and had the crowd chanting “Kaapstad Naaier.” He was armed with crowd-pleasers like “Way It Go,“ “Top 10 List,” “Salutas,” and of course the customary freestyle that comes with every Youngsta set. New fans were definitely recruited.

Priddy Ugly’s set stood out. He’s a great rapper already, but his stage antics, unique flow and vocal projection just put him in a league of his own. He performed songs from his latest EP, You Don’t Know Me Yet, like “OMG” and “Bula Boot,” giving them each a personality different to their MP3 counterparts. He really didn’t need any hype man. His petite self was all over the stage, dabbing to those hard-hitting kicks and basslines courtesy of his producer Whichi 1080.

Gigi LaMayne came on stage just after dusk. She brought with her a gang of dancers, to spice up her set. Not that it needed it. LaMayne can hold her own, and with a string of hits including “Ice Cream” and “Moja,” her set was guaranteed to be a crowd-pleaser. LaMayne is a rhyme machine, with the charisma to go with it.

It’s a nostalgia thing. If you were a South African hip-hop fan in the mid-2000s, you’d get it. Optical Illusion tracks like “Capital O” and “Ghetto Beautifulness” took me back to when I was collecting Hype Magazine mixtapes, discovering exciting hip-hop acts from all across South Africa. Seeing all members on stage, and with their close collaborators like Mawe2 and Mothipa, was indeed an experience in time travel. The guys are grown, far from the youthful backpackers they were when they released their classic album The Offering, but they still brought that same energy on stage.

ProVerb may be doing other things than rapping––radio and TV presenting––but he’s still one of the best around. Even if his music isn’t as exciting as it used to. It was when he performed his earlier material from his first two albums and even bringing Optical Illusion to the stage that many of us caught the Holy Ghost. Once again, it’s a nostalgia thing.

It became surreal. The lights and smoke combined with hip-hop bangers from the mid-2000s to the latest hits gave a perfect backdrop for the enchanting moves of the dancers. Tarryn Alberts stood out, as usual, with acrobatic moves that had the audience gaping in amazement. As if that wasn’t enough, towards the end of the crew’s set, actress and self-crowned Queen of Bling, Kanyi Mbau, and rapper Moozlie showed up to perform a track I’d never heard of before. I still can’t believe I saw Kanyi Mbau rapping.

“I just got out of rehab,” said Jabba upon entering the stage. He kicked his set off with his earlier hit “Harambe,” a fitting song given it was Freedom Day. It was great to see a man who had, a few weeks ago, just confessed to attempting suicide thrice last year. The rapper’s music is catchy, he had all of us singing along to our favourite Jabba hits, reminding everyone why they fell in love with the motswako rapper. Long live HHP!

Siya Shezi’s set was one of the best. His tongue-in-cheek humor and clever punchlines will always have you wishing you understood Zulu. His performance left everyone in awe. It’s the ease in which the man raps, with a smirk on his face, that can be as vexing as his lines and concepts. It’s the beauty of it at the same time. It’s always great to see an emcee who can move the crowd without any fancy dancers or outlandish gimmicks. Just bars. More from this guy, please.

Nasty C’s rise to the top has been nothing short of amazing. His performance on the night was proof that the kid is a star. The way everyone lost their minds to “Juice Back” and “Hell Naw” was a great sight to behold. Nasty C is comfortable on stage, and raps with his studio projection, making sure the essence of his songs persevered. I still can’t get used to how gifted of a lyricist he is.

Elzhi’s Elmatic songs were some of the crowd’s favorites. Photo: Sabelo Mkhabela

Skateboarders at Back To The City. Photo: Sabelo Mkhabela

Sabelo Mkhabela is a writer from Swaziland currently based in Cape Town.
Popular