Bassey Ikpi’s Literary Debut on Her Mental Health Journey Is a Call for People To See Themselves, and Others, With Genuine Empathy 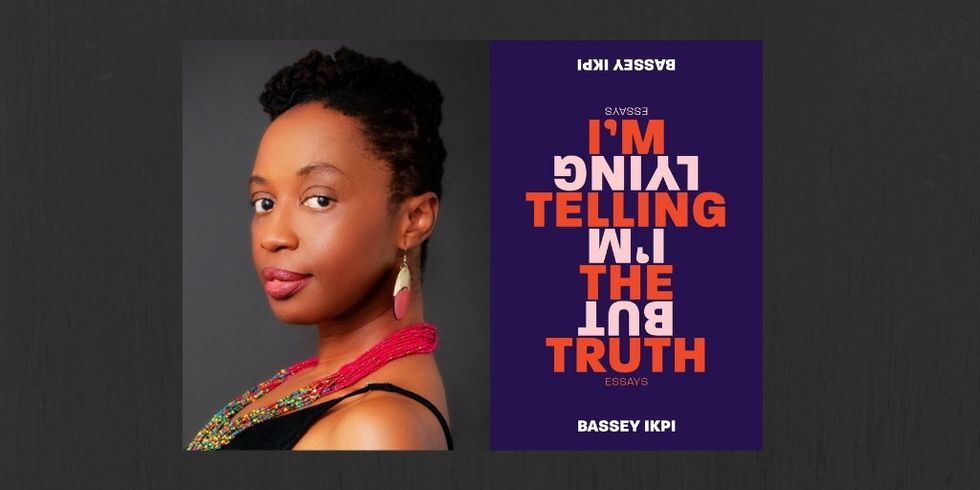 We speak with the Nigerian-American writer and ex-poet about her book that challenges us to rethink mental health challenges.

Bassey Ikpi is the Nigerian-American writer whose debut book of essays is the epitome of vulnerability and honesty around the mental health conversation.

In I'm Telling The Truth, But I'm Lying, which has already landed a spot on The New York Times' Best Sellers list, we follow Ikpi as she takes readers on an exploration of her life from her formative years in Nigeria, moving to Oklahoma as a pre-teen, being a black woman, a poet, a mother and her multitude of identities through the lens of one living with the eventual diagnosis of bipolar II and anxiety.

Her name may ring a bell for those familiar with HBO's Def Poetry Jam—Ikpi made her mark with several appearances on the show and her way with prose and words still hold true with this book of essays. Pulling the reader into a gentle tide of her consciousness, truths and lies, Ikpi shakes our preconceived notions of how the mind works and what "normal" even means.

In the book, Ikpi lays bare how she lived with a mix of emotions; the push and pull between extreme euphoria and deep depression—where at times she felt the said extremes within a day. Eventually being able to cope during her run as a confident spoken word artist and with Def Poetry Jam in her twenties, her mental health was declining and ultimately led to a breakdown—resulting with an official diagnosis of bipolar II. She takes deep dives into how mental health impacts our day-to-day—from the feelings of shame and confusion, medication and dealing with family and friends while making sense of it all. Ikpi challenges readers to think about how the stories we tell ourselves can also be a lie—despite trying to be honest.

I'm Telling The Truth, But I'm Lying is Ikpi's offering for her loved ones and readers alike to understand how her mind works as one living with being diagnosed. For her, it's not about lending external voices to help tell a chronological story, but rather giving an honest and raw account based on the memories of what she was told—since what matters is what happened and what she experienced. "I wanted to display the truth about how specifically my memory works, which is based on emotion and by intangible things," she shares. "I remember how a thing felt."

In the conversation below, we learn about what pushed Bassey Ikpi to compile this intrinsic body of work, how the book contributes to the need to talk about mental health in African communities and more.

Antoinette Isama for OkayAfrica: At what point did you realize that you were ready to tell your story in this form of writing?

Bassey Ikpi: To be perfectly honest with you, about three years ago I went through I think the worst depression to date. It'd been kind of building for a few years, but the bulk of it, the heaviness of it, the foggiest part of it hit me really hard in 2015. And I was just basically done. When you get into the book, later essays allude to it, but I was just pretty much done.

I was trying to prepare my friends, and prepare my family. I just had no intention of continuing. Because as much as I knew that I always get better, I just didn't want to go through the possibility of it getting worse, or getting bad again. I just was exhausted and tired.

I decided then also, you're actually the first person I've told this, to start writing the story so that there'd be something there. It'd be documentation. I felt like letters were inadequate. They wouldn't capture the fullness of the experience of what was happening.

I was in the mind to do this inspirational thing, which was so false. I was like, okay, well no one wants to hear the true story. They want to hear how you came out of it. That's what they want. They want the triumph, they want the self help, they want the things that you say in the mirror, the affirmations.

"I just want people to see themselves and see others just a little bit clearer, with a little bit more empathy."

And I was trying to write that, the book we sold was called, Making Friends With Giants. And just even from the title alone, it was supposed to be that. And it just wasn't working. And after about a year I went back to my laptop, back to that folder that held all those essays that were supposed to explain and I looked at them. I started writing new things based on what was in that folder.

And with the new stuff that I wrote, I had to step outside of myself and write in second person, and third person and from all these different perspectives just to get the full, to capture the full breath of the experience. And once I did that, I realized that I couldn't write the other book anymore. It just couldn't exist unless this one did first.

And so, thank God my editor was open, and enthusiastic. 'Cause she could sense that the stuff that I was writing just didn't feel good to me. I just hated everything I was turning in. So when I sent her the new essays that I had written and shown her some of the older ones that I had written, she was ready.

I was just thinking that as I was reading it because I usually have a hard time getting through those types of memoirs for that reason. There can be an air of, "Yeah, I went through a lot of stuff, but I'm here now."

But that's not always realistic.

Yeah, yeah it's not. I mean not that I'm going to spoil it for you, because I'm clearly alive, and talking to you. But it was really important for me that the book just end. You know what I mean?

There's no end credits of the movie where they tell you where the people are now. There's none of that, because it's an ongoing process. There's no cure—there's just a living with and just figuring out how to go on with your life and there's no recipe for that. There's no blueprint or manual. I just go to therapy. I take my meds. I try to stay out of toxic situations. That's the stuff that happens. It's life continues after that, there's no final stamp past just being alive.

How were you able to balance finding your purpose and telling your truth with the stigma that still hovers over African communities regarding conversations around mental health?

Honestly, I don't know, because I think to give my parents credit, they weren't as rigid as I recognized my other Nigerian, or African friends' parents. I think they kind of regret that sometimes, because none of us are doctors. But, there was a balance there with my mom being really tough and then my dad being a lot more lenient in different ways.

I think that they didn't know how to say that our happiness was important, but they kind of led us to that. And, I was fortunate because I was just a stubborn kid from the get-go. I was always kind of just off doing my own thing. I'm the eldest, I'm a girl and I don't cook.

I really did not do Nigerian things. My entire life, I was just doing a lot of not Nigerian things and stressing my parents out. But I needed to do that because from an early age I always felt really reckless. And of course I figured out what that was when I was later diagnosed, but for the most part, I just always felt reckless.

I didn't really ask for a lot of permission. I just did things and I was fortunate enough to trip and fall into decent situations. I tripped and fell into the whole Def Poetry thing—a career that I wasn't expecting—and I was able to pay bills and show them that I didn't need their money.

It helped them relax, so I was able to always land on my feet. It was when I started to not being able to land on my feet that they started getting worried and by then, I was well into my 20s, and there wasn't much they could do.

What are some takeaways you hope readers gain as they read through your book?

I actually debated for a long time about whether to put a trigger warning in the beginning of it. But I realized I didn't want to do that because I felt like it would take something away from the writing. I didn't put anything in the book that wasn't part of the writing. I didn't do a prologue, or forward, or an epilogue, or anything like that. And I just want to leave that as is.

But I want people to feel understood. I want people to not just understand themselves, but possibly people that they thought they had nothing in common with. I tell people all the time, it's not just the people that you love that you need to understand, there could be a lady at your job, or somebody at your job who is just an asshole. Just the biggest jerk in the world, and just take a moment and be like, "All right, are they just a jerk just 'cause that's their life? Or is there something going on that I recognize in this book that I can see in them?"

It doesn't mean you have to do anything, because it's not your responsibility, but just that level of empathy that's elevated from, bless your heart. This generic way into thinking that there might be something going on. And taking a split second before rushing to judgment, or rushing to condemn, or just taking a moment to be a bit kinder to somebody who might be struggling, because now you know that they're not just being flaky. They're not just, so much of it looks like personality defects.

Oh she never tries to come out. Whenever we invite her, she cancels at the last minute. All that kind of stuff you're like, "Well, why? Is there an anxiety there? Is there a depression there? What's going on?" Maybe it's possible, just be a little bit kinder. You don't have to do anything but be kind to them when they resurface, if they resurface. You know what I mean?