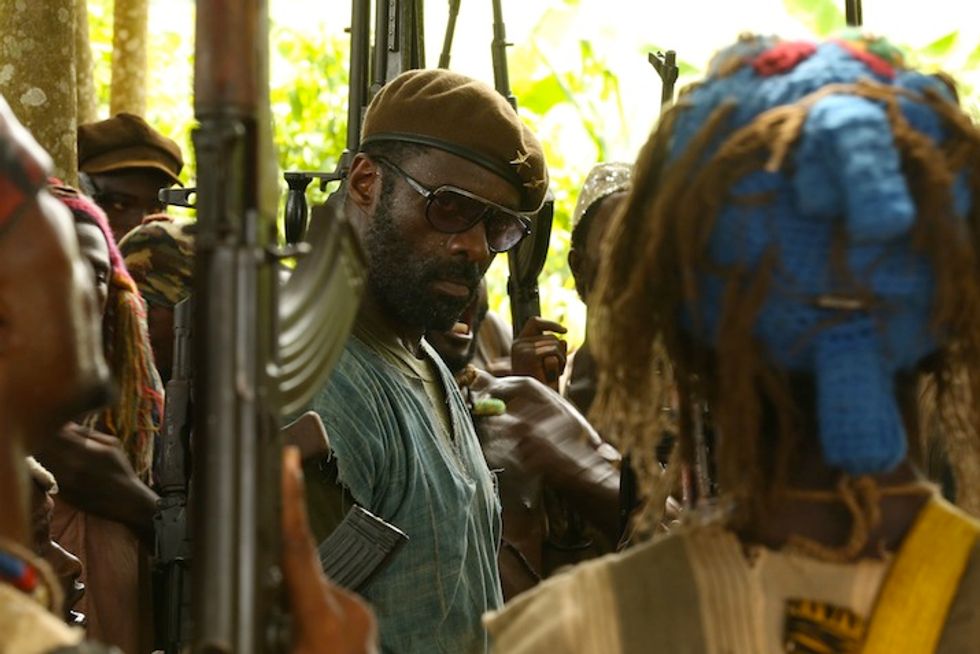 Oscar talk is stirring up for the forthcoming Idris Elba war drama 'Beasts Of No Nation' after it was acquired by Netflix for $12 million.

After a recent Netflix acquisition, Oscar talk is stirring up for Emmy Award-winning True Detective director Cara Fukunaga's forthcoming Idris Elba-starring film adaptation of Beasts Of No Nation. According to Deadline, Netflix is expected to pay up to $12 million for global streaming and theatrical release rights to the film, which Fukunaga and Elba shot last summer in Ghana. With the streaming company outbidding major studios for the distribution rights to the $6 million production, Beasts is poised to be a major contender come Oscar season. In order to be considered for the film industry's top honors, Netflix must first distribute the film in theaters before making it available to stream online. Congolese environmental documentary Virunga, another of Netflix's recent acquisitions, was recognized with a 2014 Academy Award nomination for Best Documentary after a similar rollout this past November.

The film's script, penned by Fukunaga, is an adaptation of Nigerian writer and Ventures Africa editor-in-chief Uzodinma Iweala’s critically acclaimed debut novel. Published in 2005, Iweala's Beasts of No Nation (which takes its name from the 1989 record from Fela Kuti) presents a first person narrative account of a young boy named Agu (portrayed in the film by Abraham Attah) who is forced to join a unit of mercenary fighters when civil war engulfs his (unnamed) West African country. Elba portrays the brutal Commandant who recruits Agu, and will also serve as producer on the project in conjunction with Red Crown Productions. A release date has not yet been announced.

Following the news yesterday that Netflix had acquired Beasts Of Nation for $12 million and plans to release the film in theaters and streaming services simultaneously, America's major theater chains plan to boycott Beasts Of No Nation. Variety reports that AMC, Regal, Cinemark and Carmike do not plan to show the film because of its failure to honor the traditional 90-day delay between a theatrical debut and the film becoming available on home entertainment. Variety also reports that though it won't see a major theatrical release, Beasts could get exhibited at roughly 200 to 250 arthouse and independent theaters. The Academy of Motion Picture Arts and Sciences will require Netflix to show the film in cinemas in 2015 in order for it to be eligible for the 2016 Oscars.