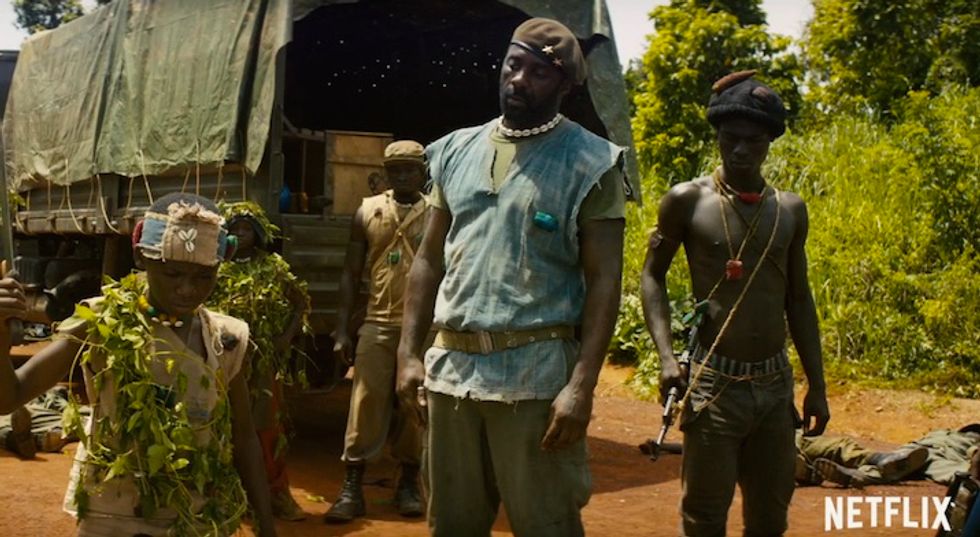 Netflix unveils a release date and teaser trailer for the Idris Elba-starring film adaptation of Uzodinma Iweala's 'Beasts Of No Nation.'

Yesterday, Netflix announced an official release date and unveiled a harrowing teaser trailer for its very first original film, Beasts Of No Nation. The screen adaptation of Nigerian writer and Ventures Africa editor-in-chief Uzodinma Iweala’s debut novel (which takes its name from a 1989 Fela Kuti record), the film tells the story of Agu (portrayed by Abraham Attah in his debut role), a young boy torn from his family and forced to join a unit of mercenary fighters in the civil war of an unnamed West African country. Idris Elba plays the part of the brutal Commandant who recruits Agu. The film, which was shot last year in Ghana, is written and directed by Emmy Award-winning True Detective director Cary Fukunaga.

Beasts Of No Nation will hit select theaters on October 16th, the same day it will begin streaming on Netflix– thus allowing the film to be eligible for Oscar consideration, whilst remaining the subject of a boycott by the four largest cinema chains in the U.S. According to Variety, Netflix is partnering with Bleecker Street and Landmark to open the film in 19 cities across the U.S., including New York, Los Angeles, Boston, Philadelphia, Baltimore, Washington, D.C., Atlanta, Indianapolis, Detroit, Chicago, Minneapolis, Milwaukee, St. Louis, Houston, Dallas, Denver, Seattle, San Francisco and San Diego.

Watch a teaser trailer below.