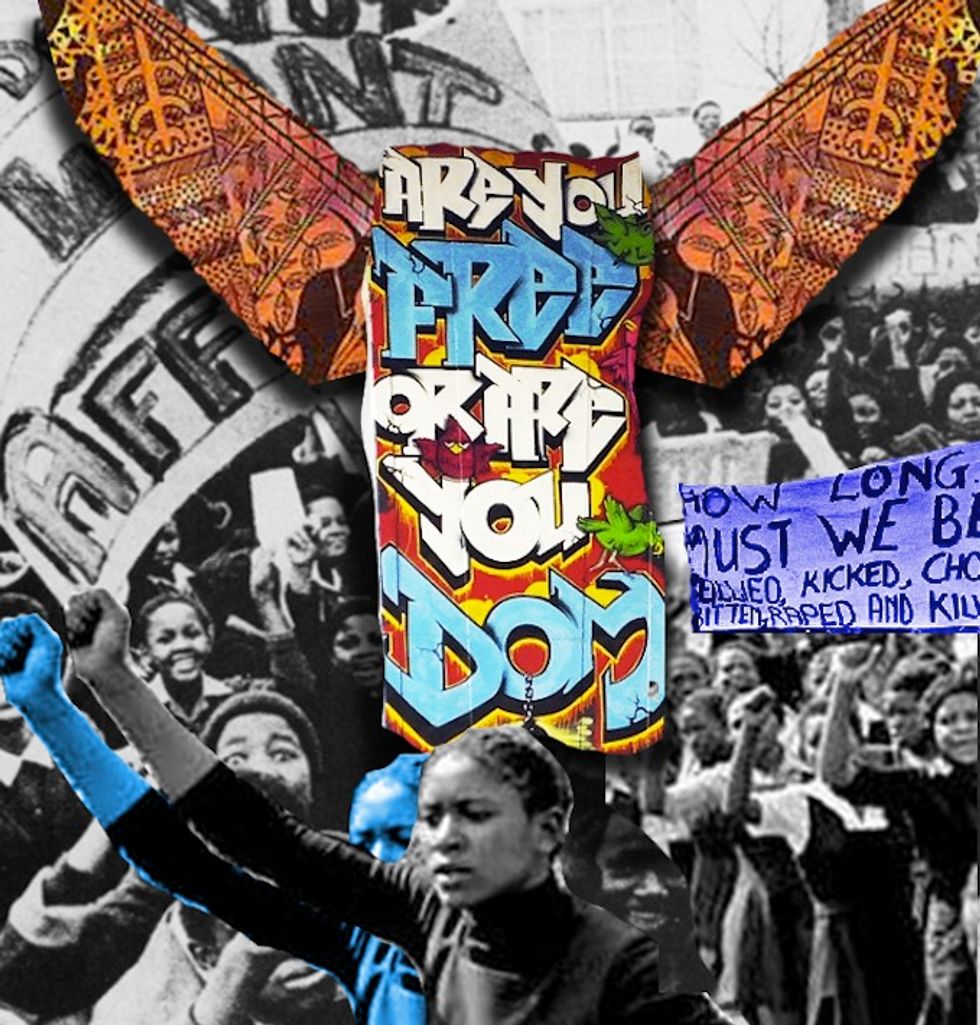 Producers/professors/activists/emcees Pierce Freelon and Stephen Levitin aka Apple Juice Kid strike again with the hard-hitting, Pan-African track "Free or Dom." We've been following the innovative work the pair are doing across the continent, utilizing hip-hop as a tool to promote cultural exchange, community engagement and advocacy in their international program Beat Making Lab (which also airs as a web series on PBS Digital Studios). Boasting a bombing bass that drives its thought-provoking lyrics, "Free or Dom" promotes transcontinental solidarity through verses from both sides of the Atlantic by Tumi, Zubz, Asheru and Freelon.

The first musical release off ARTVSM, a collective founded by Freelon and Levitin that bridges arts and activism, "Free or Dom" commemorates the courageous youth that spoke out against injustice during the 1976 Soweto Uprising and fought for their freedom and the freedom of generations to come. Sampling the South African dance-floor hit “Khona,” the song plays off Mafikizolo's popular track's title which translates from Zulu to “there” or “at that place.” Each MC drops a verse addressing the effect the Soweto Uprising had on them from the geographically-diverse places they inhabit, producing a collaborative effort that exemplifies the collective struggle that unites black people throughout the African diaspora in a shared stance of solidarity. Inspired by a graffiti mural found in Newtown, Johannesburg, the song asks listeners “are you ‘free’ or are you ‘dom’?" (dom being a derogatory Afrikaans word used to belittle black South Africans) and follows in the tradition of publicly engaged artists like Hugh Masekela, Miriam Makebaand Amiri Baraka, who believed in the arts' powerful ability to cultivate unity and spur social change.

Each of the featured MCs were asked why the Soweto Uprising was important to their lives and why they were inspired to write their verse. Check out their responses and listen/download the track below.

Zubz The Last Letta:  The Soweto Uprising is an example of the power of a collective voice. When many come together and speak as one, it has the ability to effect change. Those folk in 1976 were young and had no one to speak for them. Forced to just be listeners in a one way flow of communication AND in a language they weren't comfortable in. Together they resolved to be heard AND do it in their own tongue. Even when it meant they could get hurt. Many of them did get hurt and eventually died for the right to be heard.

Asheru:   For me this song represents coming full circle-­ culturally, artistically, and historically. The Soweto Uprising symbolizes the power of youth solidarity in the effort to change the unfair conditions in which they live...just as the civil rights and Black Power movements in the States wouldn't have been possible without the contributions and strength of the youth community.

Pierce Freelon: I feel like the ancestors called 'Free or Dom' into being. A few days before we recorded the song I ran into my homie Asheru in front of the mural that read, ‘Are you free or are you dom’. Days later we built with Tumi and Zubz on the Soweto Uprising and its legacies and the track came into being. I asked myself the question, ‘am I free?’ as I reflected on my grandmother, Madiba, Fela and other ancestors and their struggle against the ills of white supremacy.

Tumi:  To me the youth uprisings represent insistence. The insistence to exist, be seen, be heard, be acknowledged. If you don't see me I will be the strobe light to your blind eye. The song is the continuance of that insistence.