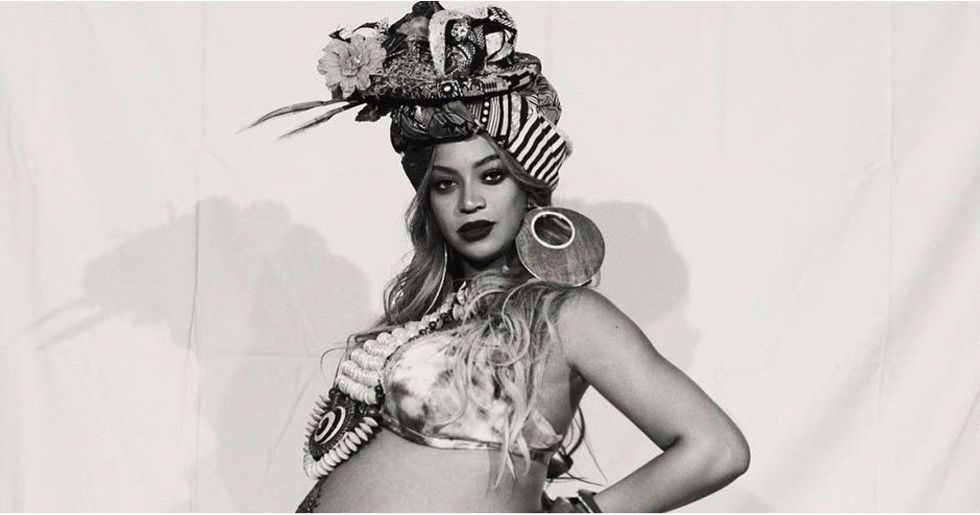 DIASPORA—In yet another showing of her love for all things "African," Beyoncé held a baby shower this weekend inspired by the fashion, music and culture of the continent.

Bey showed off her henna-embellished baby bump and blue and colorful ankara-style skirt, while Jay Z rocked a black fila and African continent chain. Beyoncé's mother, Tina Lawson, shared a video of her and some of the attendees, which included Kelly Rowland—who wore a flowing number by one of our favorites, Liberian designer Archel Bernard—Serena Williams and La La Anthony, to name a few, in an elaborately decorated "wax-print wonderland" with Fela's "Lady" playing in the background.

All theses beautiful ladies at The Carter Push party! ❤️❤️

Kelly is just everything 😍 #KellyRowland #CarterPushParty

The superstar's affinity for Africa has long been documented, she recorded a Fela-inspired album a couple of years back, she referenced Afro-diasporic spirituality extensively in Lemonade, she visited Nigeria back in 2006 as part of the Beyoncé Experience world tour, where she sang the country's national anthem, and she consistently looks to African creatives for inspiration and creative direction.

She's often been largely excluded from conversations about cultural appropriation (see: the Beyhive), but there was slight backlash this time around, with some folks arguing that her love for Africa doesn't translate to her making an actual impact on the continent.

Does the queen only acknowledge the idea of Africa and not the actual place? Does her appreciation for African-inspired looks and culture go beyond just an aesthetic admiration and love of Fela and wax print? Does she play too heavily into the "Africa is a country trope?" As a Black American, is it even possible for her to "appropriate" African culture?

Beyoncé had an African themed Push Party and there was Fela Kuti jolting in the background. I'm smitten

Maybe today isn't the day for me to talk about the homogenising of African cultures, by your faves.

Ok, she has no choice but to name her twins Taiwo & Kehinde. https://t.co/gmoD3YUfJ2

African-themed baby shower... The only Africa this Beyonce recognizes is in a dodgy history book she needs to throw away yazi.

South Africans, in particular, had a lot to say on the matter.

Solange: I'm performing for my fans in South Africa

Beyonce can do everything African inspired, like music, clothing, hairstyle and even baby shower push party. Except for touring in Africa.

Why are people on here saying Africa can't afford Beyoncé when 1) African countries* have very diff economies 2) Even MJ has toured there.

Others came to her defense.

What if Beyoncé is busy planning the biggest tour for South Africa and AKA out here trying to ruin it with his mouth? pic.twitter.com/6INIGjuuLP

@akaworldwide Beyoncé has been to South Africa before in 2003. She's performed in Nigeria. She hasn't performed here because we can't afford her.

@akaworldwide For Beyonce to be African enough for you She must come perform in Africa? That's some dumb logic right there.

There's certainly no denying that Africa is the "wave," right now. Beyoncé has championed this reemergence, and she's done so for quite some time now—arguably even before it was considered a "wave." Of course, none of this puts her beyond critique.

Africa is not only "now," but "right now," and Beyoncé's unremitting love affair is only further proof of this.