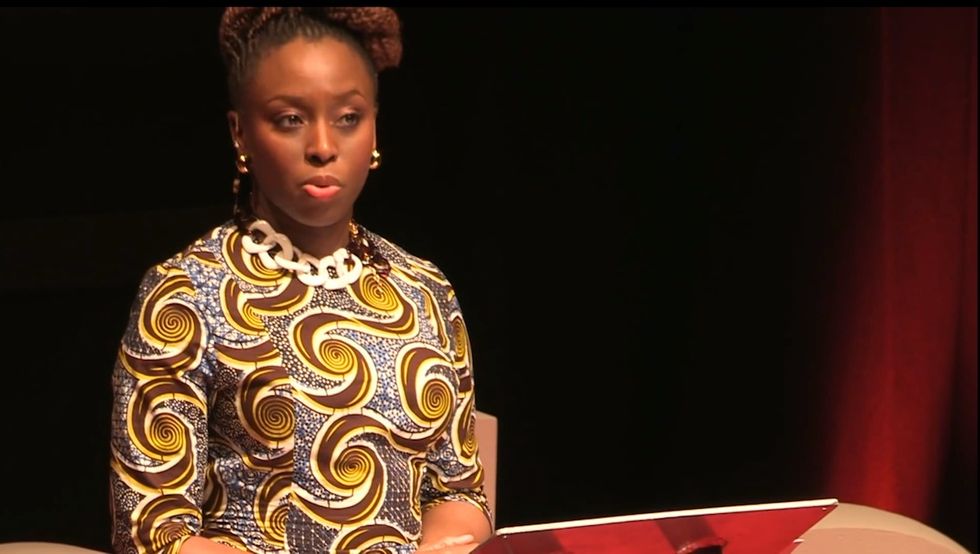 Alas a media blitz is upon us courtesy of Queen Bey's utter reinvention of the album. The high point of the bombshell unveiled at the stroke of US east coast midnight comes from Chimamanda Ngozi Adichie– who spits a verse (sampled) on Beyoncé's ladies power anthem "Flawless." The rework of screwed and somewhat chopped Hit-Boy-produced crown adjustment "Bow Down" pairs the two titans of girl power together on the trappiest call to universal feminist action yet made. Said sampling comes from Adichie's follow-up to her massively important 2009 pillar of the TED community, a speech delivered at TedxEuston which asks audiences to dismiss the notion of feminism being inherently "unAfrican." The newly crowned TED Talk heard round the world, "We should all be feminists" explores how Adichie transitioned from "feminist" to “happy African feminist who does not hate men, and who likes lip gloss, and who wears high heels for herself but not for men.” In between the bowing, take a break to watch the speech that inspired the coming wave of flawless mornings.

"Flawless" (watch a 15 second clip below) features the following lines from the 30 minute talk:

"We should all be feminists"

We teach girls to shrink themselves

To make themselves smaller

We say to girls

"You can have ambition

But not too much

You should aim to be successful

But not too successful

Otherwise you will threaten the man"

Because I am female

I am expected to aspire to marriage

I am expected to make my life choices

Always keeping in mind that

Marriage is the most important

Now marriage can be a source of

Joy and love and mutual support

But why do we teach to aspire to marriage

And we don't teach boys the same?

We raise girls to each other as competitors

Not for jobs or for accomplishments

Which I think can be a good thing

But for the attention of men

We teach girls that they cannot be sexual beings

In the way that boys are

Feminist: the person who believes in the social

Political, and economic equality of the sexes