The Biggest, Blackest Wedding of All Time Will Make Your Day 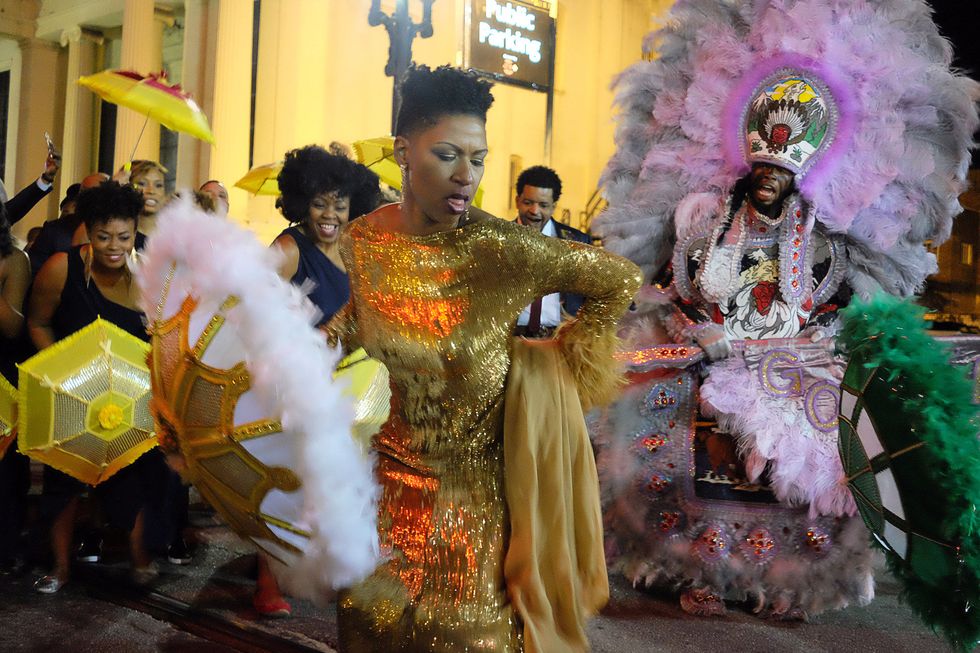 Nigeria meets New Orleans at the biggest, blackest wedding of all time.

Shantrelle P. Lewis is the curator behind, quite honestly, the most dapper photo project of all time. She’s also the founder of William + James, a bow tie haberdashery steeped in the philosophy and aesthetics of New Age Dandyism.

Not surprisingly, Lewis throws one hell of a dapper party.

Earlier this month, the Dandy Lion curator put her sartorial eye to use at her wedding to Shoppe Black CEO Tony Oluwatoyin Lawson, a fellow Howard University graduate whom she met a few years ago through Facebook. (Coincidentally, the two actually entered Howard the same year.)

Videos (brilliantly shot by filmmaker Alex K. Colby) and photos from the celebration are already starting to make their way around social media. It’s entirely possible you’ve come across Lewis and her well-dressed guests parading through the streets of New Orleans in their very own second line parade, or seated together at their “Jollof and Jambalaya”-themed first dinner.

An immaculate fusion of the couple’s New Orleans and Nigerian cultures, the four-day extravaganza was inspired, in part, by Lewis’ favorite movie, Coming to America, from which she takes the moniker Imperial Majesty, the Royal Queen of Zamunda.

“I wanted the wedding to reflect my love for this pop cultural phenomenon without being so kitschy and literal,” Lewis writes in an email to Okayafrica. “The wedding was themed as the Royal Wedding of Zamunda without giving people too much Coming to America. It spoke to Afro-opulence and Black excellence while nodding to my African-Americanness and Tony's African roots. Just like Lisa and Akeem.”

For Lewis, there’s no question that New Orleans—where her family has lived for generations—is the most African city in the U.S. “Our traditions are the perfect example of African modernity—from jazz, to second lines, our culinary techniques, there's so much that speaks to the amalgamation of transnational African aesthetics over the past few hundred years,” she says.

It’s important to note that throughout her engagement, Lewis was going through initiation into Lukumi priesthood. “I didn't have the time to run around and be a blushing bride like most people, nor try on wedding dresses because it would go against so many temporary restrictions I had as a Iyawo—I couldn't look in mirrors, I couldn't touch other people,” she says. Fortunately, she was put touch with Nate White, the 23-year-old designer and CEO of Nene L.A. Shiro, who designed the gown of her dreams.

To throw what some are touting as the “biggest, blackest wedding of all time,” the couple enlisted the help of wedding planner Fresh Johnson of Elle R. Jae Events and an almost entirely black team of vendors (80 percent, to be exact).

Although Lewis wasn’t expecting the viral sort of response it’s garnering (“We wanted to just create something magical, something authentic, and something that was a damn good time,” she says), the end result, as you can see below, was nothing short of #WeddingGoals.

For more, check out the hashtags #JollofAndJambalaya, #BlackestWeddingEver and #shoppeblack and keep up with Lewis, Lawson and their Shoppe Black startup on Instagram at @apshantology, @thebusyafrican and @shoppeblack.