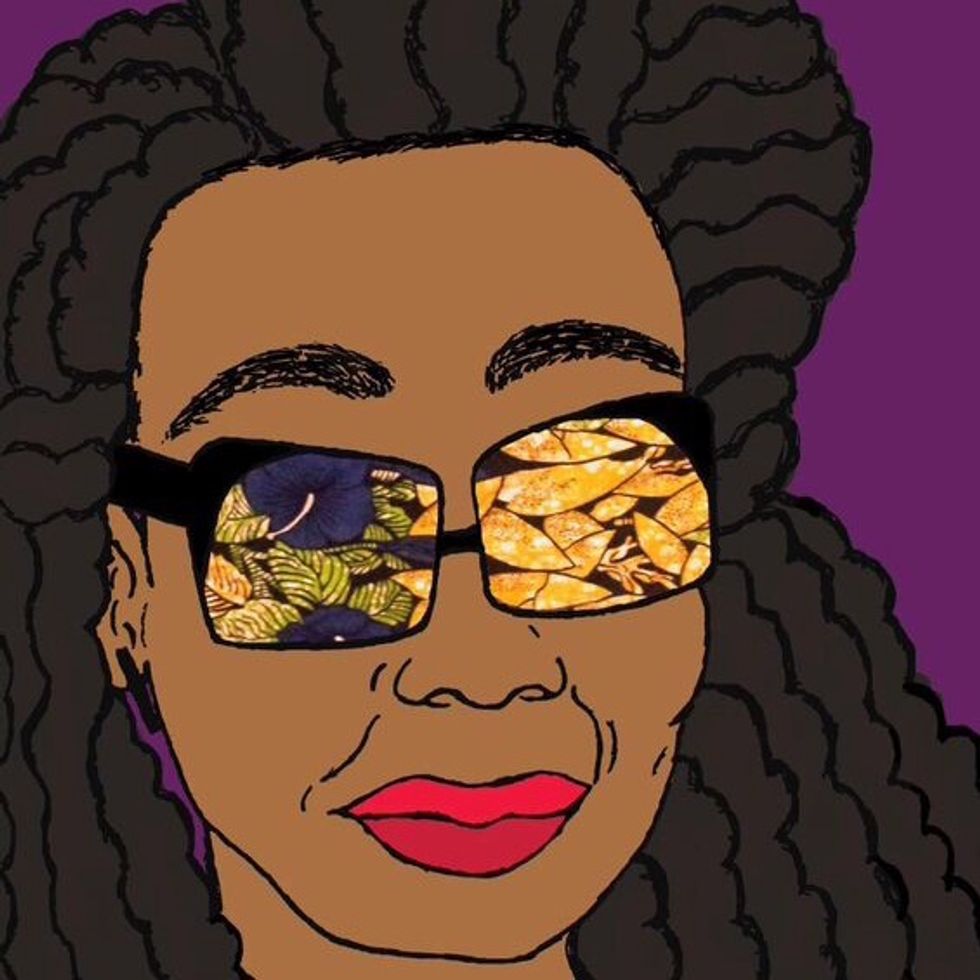 All images courtesy of Bekke Popoola

We recently spoke with London-based artist and curator Bekke Popoola, who gave us a sneak peak of her new exhibition, Black British Girlhood. Debuting 24 July at the Centre for Better Health in London, the show aims to celebrate and explore the many narratives that come with growing up Black in Britain.

Born in London to a Nigerian mother, Popoola, who grew up on the east side of the city in Hackney, considers herself "very much an East London girl"– a swagger she embodies with her box braids and Adidas superstars. She describes growing up in Hackney as "bitter sweet," touching on the struggles and stigma that came with being the child of African immigrants. "A lot of us grew up ashamed of it and I think now we understand how vital and beautiful it is," she says. Fellow Nigerian Londoner Skepta recently described a similar sentiment on Wizkid's "Ojuelegba" remix, spitting "when I was in school, being African was a diss / sounds like you need help saying my surname, Miss." But with Afrobeats storming the UK charts and African artists increasingly stepping into the spotlight, times are changing for young musicians from the diaspora.

Like many diaspora artists, Popoola taps into her roots for inspiration. "My heritage plays a huge part, the culture our parents exposed us to is very much part of Black British culture," she tells me. "I would say that inside my home was Nigeria and outside of that was England." It's this unique, multi-cultured outlook and upbringing that Popoola aims to capture in Black British Girlhood.

Part of the BBOB collective alongside fellow artists Kariima Ali and Olivia Mathurin-Essandoh, Popoola's work with the exhibition saw her curate the art of young, up-and-coming Black British women with the aim of offering a platform for these artists to define their experiences on their own terms, away from the rigid ideas of what art or blackness should be. "This is something we want to be an accessible safe space to Black British girls as well as women," she says. Quoting the mantra of 90s clothing line FUBU, with its name being an acronym of the phrase "for us by us," Popoola uses the exhibition to present the work of artists from paths of life both parallel to and intersecting with her own, all united under the banner of Black British girlhood.

For the launch of the project she worked alongside filmmaker Cecile Emeke, whose web series Ackee & Saltish and Strolling touch on everything from feminism to decoloniality.

Popoola says she was inspired to launch Black British Girlhood after reading an excerpt of her close friend Deborah Findlater aka DJ Pepper Coast's childhood diary. "It sparked so much nostalgia," she mused, "there were a lot of things I related to and saw how cool we were as young girls... I want this be a way of us paying homage to us."

Popoola, who uses "sisterhood, nostalgia and summer" to describe her work, sums up the soundtrack to her childhood with a single song, Sonique's "It Feels So Good," a track whose positive energy and distinctive Y2K sound are a perfect fit for the project.

Black British Girlhood opens 24 July with poetry readings, sounds from DJ Pepper Coast, and a film screening by Cecile Emeke. The exhibition is free and open to the public from the 27th to the 31st of July.

Hamda Issa-Salwe is a second generation Somali residing in London where she studies fashion and is currently interning for an international luxury brand. Her interests include fashion, pop culture and social justice issues.