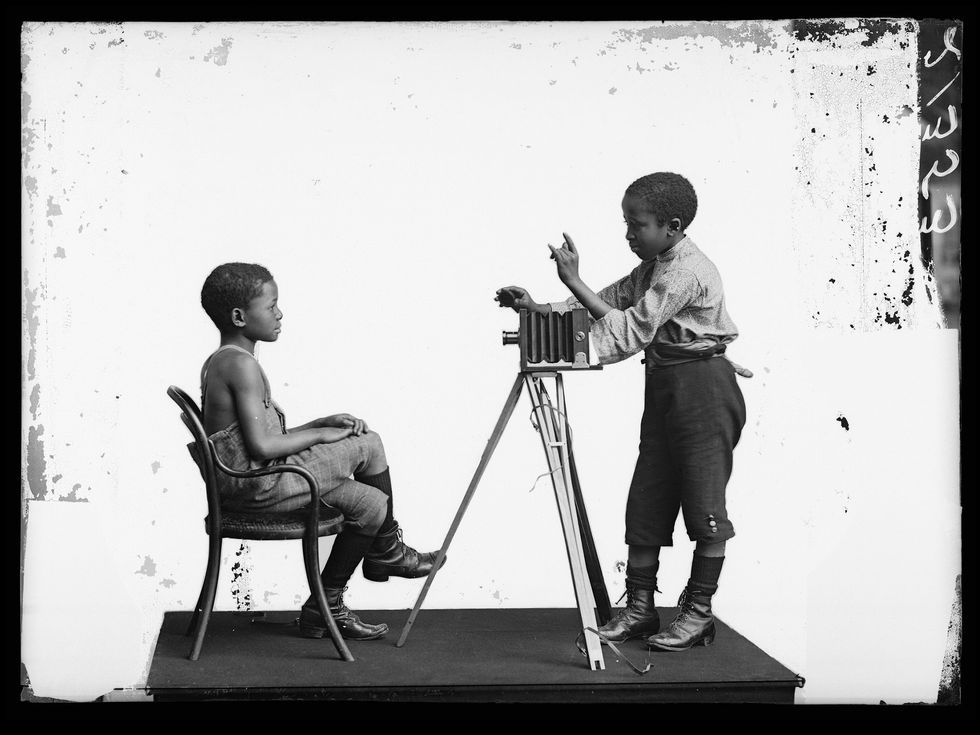 Presented by London's Autograph ABP and curated by Reneé Mussai, the agency's senior curator and head of archive and research, Black Chronicles IV will show a vast array of photographic studio portraits, reprinted from original glass plates and archive prints. The images were rediscovered in 2014 after being buried in the Hulton Archive's London Stereoscopic Company collection for over 125 years.

"These exquisitely rendered images are highly relevant to contemporary black representational politics and cultural history, revealing alternative perspectives to the modes of colonial ethnographic display prevalent at the time," the exhibit's press release says. "Offering the Johannesburg public a unique opportunity to encounter a diverse range of black presences through the prism of 19th century studio photography in Europe and America, the exhibition foregrounds the extraordinary stories of both ordinary and prominent black figures—performers, dignitaries, politicians, servicemen and women, missionaries, students, businessmen and international royalty."

Hosted at University of Johannesburg's FADA Galley, this iteration will feature portraits of notable black South Africans, including Charlotte Maxeke, political activist, academic and founder of the Bantu Women's League, her sister Katie Makanya and Paul Xiniwe—who were photographed in London at the turn of the century as part of The African Choir. "As members of the 'African Intelligentsia,' these figures went on to become leading social activists and reformers," the press release adds. "Enabling different ways of 'seeing' individuals often marginalized within Victorian Britain, colonial Southern Africa and the American South, Black Chronicles IV contributes toward an ongoing process of redressing the persistent 'absences' of black narratives within the historical record."

Mussai notes the aim of the exhibition series is continue to expand critical inquiry into the archive to locate new knowledge and enrich photography's cultural histories. "Not only does the sitters' visual presence in Britain bear direct witness to the complexities of colonial and imperial history," Mussai says, "they also offer a fascinating array of personal narratives that defy pre-conceived notions of cultural diversity in the 19th century."

African Choir 1891 Re-imagined, a highlight of the exhibit, is the sound and image-based installation comprised of 16 portraits of the original members of The African Choir, who toured Britain in 1891. The images are accompanied by an evocative five-channel soundtrack of songs composed and arranged by South African artists Thuthuka Sibisi and Philip Miller as a creative re-imagining of the choir's concert program.

Another notable aspect of the exhibit is the inclusion of over 200 images selected from leading African American scholar and civil rights activist W.E.B. DuBois' landmark collection from The American Negro Exhibit at the 1900 Paris Exposition. This is the first time these images will be exhibited in South Africa, as well as on the African continent. The images ultimately give insight into the self-affirming expressions of black culture in the U.S. at the end of the 19th century and challenge the popular racist caricatures of that era.

"We hope to drive the debate around representation and black subjectivity, and examine the ideological conditions in which such photographs were produced and the purpose they serve as agents of communication, then and now," Mussai says. "At the heart of the exhibition is the desire to resurrect black figures from oblivion and re-introduce them into contemporary consciousness."

Take a look at a selection of images from the exhibition below:

Black Chronicles IV runs from April 13 to May 31 at the FADA Gallery, University of Johannesburg. For gallery hours and more information, click here.