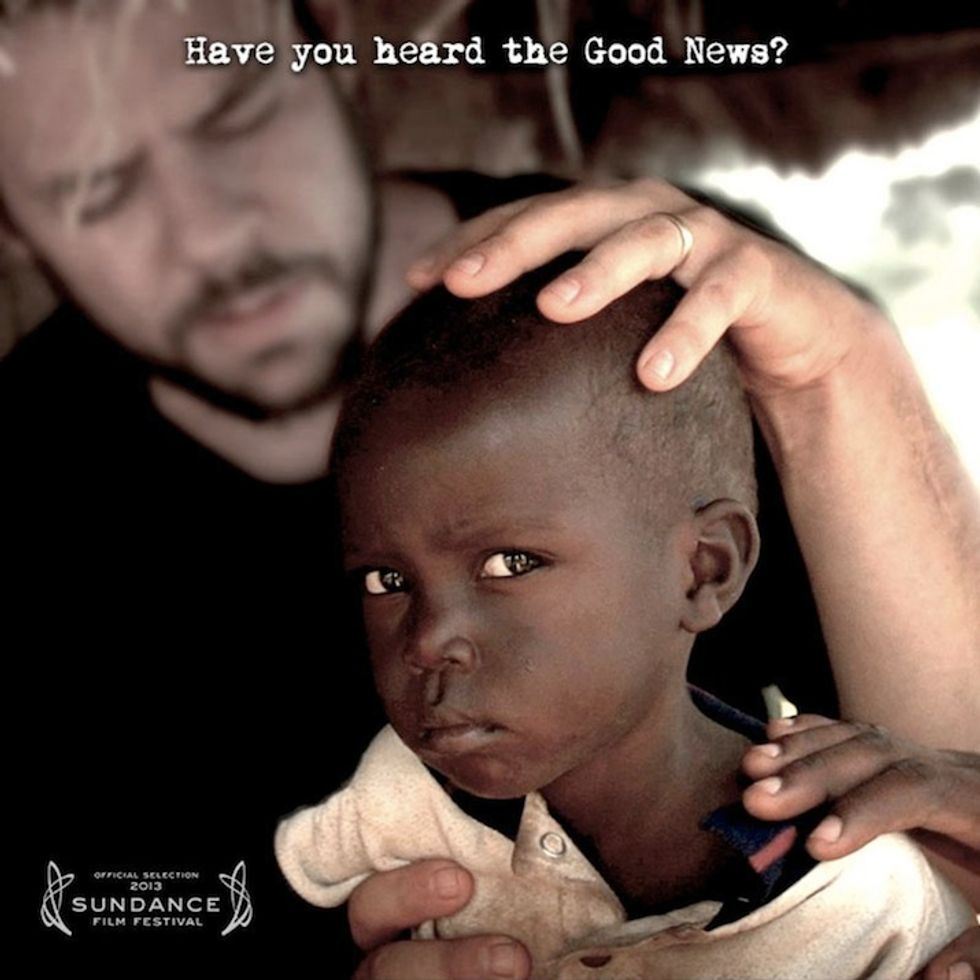 An in depth interview with Oscar winning director, Roger Ross Williams as he discusses his latest film: God Loves Uganda.

Roger Ross Williams is perhaps better known for getting Kanye'd at the Oscars than for being the first black filmmaker to win an Academy award in the Documentary Shorts category, but we have a feeling that's about to change. The producer-turned-director's latest, God Loves Uganda, is an uncompromising look at a particularly sinister element of U.S. engagement with Africa: the implication of American citizens in fomenting and funding violent homophobia in Uganda.

Shot by sumptuous shot, Ross Williams makes the argument that Christian evangelicals are using Uganda as a proxy for waging the culture war against "sexual immorality" that they lost in America. Anti-abortion, anti-feminist and anti-homosexuality, American ministers flood the country with money and missionaries who spread the fundamentalist message.  By exposing this link, Ross Williams' first feature length documentary blows apart the assumption that Africa is somehow 'naturally' homophobic (in contrast to Western nation's progressive. evolved politics), instead showing the various dynamics that inform attitudes to homosexuality in Uganda. He shows how U.S. Christian Evangelicals provide the money and invective that sustains Uganda's state sanctioned homophobia.

Excavating and explaining the complex relationship between U.S. fundamentalist Christian Evangelicalism, Uganda's anti-gay legislation, homophobic attitudes, and the boom of Christian evangelicalism in that country is God Loves Uganda's primary achievement. But the film is also pertinent to the continent more broadly. God Loves Uganda feels particularly urgent in a moment when an Anti-Pornography Bill has joined MP David Bahati's "Anti-Homosexuality Bill" (aka the "Kill the Gays Bill") on the table in Ugandan parliament; when queer people have faced trial in Cameroon and Malawi; when Western nations have cut aid to countries with laws prohibiting homosexuality; and when legislation has proved powerless to protect queer people from harm in South Africa.

We sat down with Roger Ross Williams to discuss the giddying confluence of money, sex and power in Uganda, and what he wants to say to U.S. evangelicals.

OKA: Why did you decide to make God Loves Uganda?

Roger Ross Williams: I grew up in the African-American Baptist Church, my father was the head deacon of the church, my sister is a minister, my uncle was a pastor of another church so it’s basically the family business. Growing up was very difficult - being a gay man - so I have always been fascinated with the power of religion.  When I was making  my last film, Music by Prudence in Zimbabwe, one of the things I noticed was the deep-seated spirituality, and the hold the church had; there’s a church on every corner and all-night prayer vigils. When I heard about what was going in Uganda I was curious because of my personal background.

OKA: Before you were a director you were a producer did you produce anything on the continent? What drew you to make Music by Prudence?

RRW: No. All I just woke up one day and decided I wanted to make a documentary in Africa. I had never been to Sub Saharan-Africa so I was fascinated by it. You see a million films, but most are made by white Americans - not that there are many African-American documentarians anyway - but I wanted to bring an African-American perspective to the continent. I wanted to have that unique dialogue, find the commonality between me and the subjects, and let the subjects tell their own stories. There are so many white savior films - it’s always a white guy saving brown people - and when I heard about Prudence I wanted to make a film where the hero was an African.

OKA: Is there a common thread in the kinds of stories that you tell?

RRW: It’s definitely the outsider perspective. Because that’s what I am: I’m a double minority. To some extent making films is playing out your childhood: not feeling part of a community yet being in that community; being in the church and not feeling part of the church. It’s funny, because in the suburb of my town we were the only black family living in a white suburb but the church we went to was black. So I lived on the white side of town and went to the black church with all the people from the other side of town. I’ve always identified with the outsider, with stories of alienation. Those are the stories I’m looking for and trying to tell.

OKA: There’s a scene in God Loves Uganda where you’re interviewing an American couple and you manage to make them look pretty sinister, shooting them from a distance and with a wide angle. Throughout the film there are subtle aesthetic choices that advance the argument you’re making in the film in understated ways. Can you talk about some of these choices?

RRW: In every shot that I set up I want to tell a story in that shot and show the irony. With Jesse and Michelle, the couple you mentioned I shot on a golf course because when you think of Uganda you don’t really think of golf courses. I used to call them Brad Pitt and Angelina Jolie because they’re very good looking and having them sit there, it’s almost like they’re at a country club. So it was definitely a choice to kind of allude to imperialism. In addition, I was obsessed with the street preachers because they are everywhere. In their repertoire, they’re always preaching about sexual sin, and they definitely helped show the atmosphere in the country.

OKA: You make a strong argument for the connection between imperialism and contemporary U.S. activities in Uganda and that’s particularly captured in scenes like the one at IHOP where they are praying and laying hands on particular parts of the globe.

RRW: I felt very strongly about communicating that connection, and that’s a huge part of what that scene is about. It’s also about Uganda which evangelicals feel has this Biblical significance, being at the head of the Nile. There’s also the idea that Uganda is the “pearl of Africa” as Winston Churchill called it, and that “it is now time to have that pearl harvested”. The same way we mine minerals, they were mining souls. Uganda is a place to go and build an army to do their bidding. Without saying it explicitly, I wanted to show that Uganda is the number one destination for American missionaries. And within Uganda they are welcomed because they are this white face of hope and power - everything America stands for.

OKA: What about the prayer rally scenes? Did you feel any ambivalence to showing these scenes of fervent worship on camera? What were you trying to communicate?

RRW: I definitely wanted people to think about what it feels like to be in that situation. It’s very intense in Uganda, but also at IHOP (International House of Prayer) in the States. At IHOP they have Christian rock playing 24/7, which hasn’t stopped playing in 13 years, and it gets really intense. In the prayer rallies, people become almost possessed, they’re getting demons out and it’s such theatre. When we went, people were on the floor, sweating, rolling around and speaking in tongues. But it was shocking to me because they were young, hip and passionate people. A lot of the young people come from troubled backgrounds and through religion they found something “healthy” to be passionate about. People accused me of sensationalizing things but actually after the Sundance Labs I toned down some of the footage because it was too intense for the audience.

OKA: Can you talk us through the decision to have two ministers - Reverend Kaoma and Bishop Christopher - framing the film’s argument?

RRW: It was important that the voice of reason came from Africa, that Ugandans were coming up with their own solutions. I wanted to show that there is already a discussion going on, and work being done. Earlier on in the filmmaking process I’d become so focused on the anti-gay pastors in Uganda and people at IHOP that there was almost too much of them. At the Sundance Lab someone said the film seemed like a big ad for IHOP.  So for balance, I added in Reverend Kapyah Kaoma and Bishop Christopher Senyonjo. Kapyah’s story stands out, particularly the subject of his research and the fact that he’s a Zambian in the church who identified a problem and spoke out against that problem. Bishop Christopher was thrown out of his Church and ostracized. This is a man who is so sweet and truly believes that he has to stand up for LGBT people because it’s what Jesus would do. He strongly felt that this was wrong and that he couldn’t just sit and watch.

OKA: When you showed the footage from David Kato’s funeral we got a peek at activists but didn’t really get to hear from LGBTQ Africans in the film. Did you interview any black gay Ugandans?

RRW: I interviewed lots of activists and ultimately I decided not to make that film. I wanted to make a film that was an argument about faith. I could have made an entire film about activists I didn’t feel that was going to enable the kind of dialogue I wanted to encourage within the Church, rather, it would immediately alienate the Church. My goal with this film was to create a dialogue between the two sides, the affirming and non-affirming sides of religion. Essentially, what’s going on in Uganda is faith-based: that is where all the justification for the Bill and the hatred comes from, and not just LGBT people, but single unwed mothers, and anyone who falls outside of this very strict Biblical interpretation of morality. So it was really important that the narrative was about faith.

OKA: So the first time you were in Uganda the people you interviewed didn’t know you were gay and the second time you went, someone outed you. What was that experience like?

RRW: Some people I’d talked to before, refused to talk to me. I had in my mind the BBC crew that had been run out of town. They were making a comedic BBC documentary ‘The Worst Place In The World to Be Gay’  and Scott Mills would interview the scary anti-gay pastors asking ‘do you know a gay person?’, and they’d say ‘no’ and he’d say I’m gay and they’d freak out. But they tried to do this to David Bahati who called the police and the BBC crew were basically forced to leave. There was a terrifying incident where I was surrounded and the people who ambushed me were saying ‘we know you’re gay’. They decided that they were going to pray for me rather than do anything else, but one of the really scary, powerful pastors held up the Bible and “this book says these people must be killed.” I later found out that he sent an email saying “don’t worry we’re going to take care of him ourselves,” so I was afraid. But then there are activists living this everyday, fighting this every day. I’m American, I’m in and out, I have security, so I really had no right to feel scared when there are people living this, fighting this.