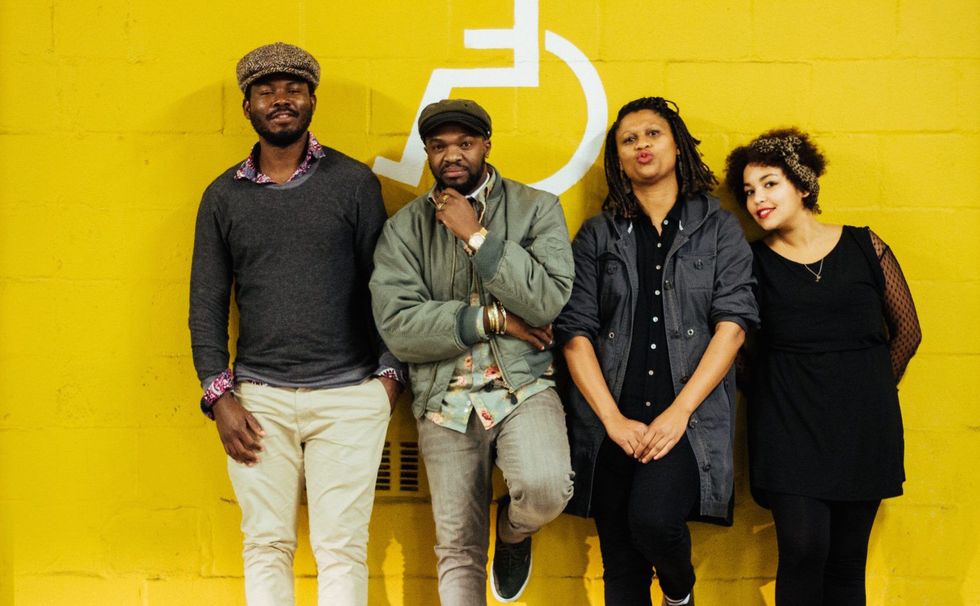 Beneath a glossy exterior, the Cape Town film industry reflects a deplorable deficiency of Blackness. One collective is here to change that.

The city of Cape Town is a firm favourite of the international film market, with international producers lusting after our lush landscapes, state of the art studios and hardworking, capable crew. This all sounds great, and the economy seems to be a cinema fan. But beneath the glossy technicolour exterior the local film industry reflects a deplorable deficiency of Blackness.

In 1997, Mandla Langa, CEO of ICASA (the Independent Communications Authority of South Africa), charged the South African film industry with an “unbearable whiteness of being,” favouring those who already had access to an expensive medium and claiming that cinema was “hostile to the tradition of oral culture and unfriendly to black would-be filmmakers.”

Many would argue that little has changed since Langa’s outcry.

There is however a burgeoning collective who demand that the local film industry be more inclusive and a lot more noir. They are called the Black Filmmakers Film Festival (BFFF), and they’re a collective of innovative black filmmakers, producers and entrepreneurs who have a resolute and powerful mandate to build an empowering platform for filmmakers from across the continent and the diaspora. Their leadership is comprised of a diverse range of young creatives from across Africa, with a strong presence of queer black women.

Their founder, DRC-born producer and director Simbi Nkula, describes his motivation for initiating the platform as twofold. The initiative was a response to his own experiences with xenophobia in South Africa. He built the BFFF around the belief that exposure to each other’s stories creates a sense of compassion for the shared experiences of African people. Secondly, Nkula experienced a lack of recognition for black talent in the industry.

Another founding member, Vux Zum, a producer, actor and director from Gugulethu, shares similar experiences. Zum recalls working on his first film, a German short, as a runner (assistant). “Being a runner was not enough for me. I was fascinated by the work of the 1st Assistant Director,” he mentions in an email. “Three weeks into the production I told the 1st AD that I want to do what he did. He laughed, patted me on the head and said something in German to his 2nd AD, who summoned me into his office saying that from that moment I would become the first Assistant Director’s trainee. Three months later I was employed as a 3rd AD and have continued to grow to within the industry since.”

However, not all black filmmakers get the “leg up” to climb the ladder. Zum soon noticed that in the film industry, it takes people of colour much longer to get into higher paying positions than their white counterparts. After trying to investigate why, he realised that besides stereotyping and racism, language can be a barrier leading to intimidation and lack of confidence. He explains that this leads to black professionals “staying in the comfort zone of being an assistant.”

The Black Filmmakers Film Festival has claimed the last Wednesday of every month as theirs. Their screenings have a signature sophisticated but relaxed look and feel and audience members can lounge around, sipping well-priced wine while gaining access to a program of carefully-curated African films.

Photo-journalist and BFFF employee Tania Pehl explains that the screenings have a growing audience largely comprised of young, black professionals interested in collaborations. “Screenings present a unique opportunity for black filmmakers to network with other industry professionals or people working in fields like fashion or media who want to get involved in the film industry,” Pehl tells me.

The collectives recognises that a focus on audience is key to growing the local industry. “South African films hardly get seen by the people who the films are about,” says director and BFFF board member Sarah Summers. She further explains that local filmmakers who want to tell home-grown stories are not met with great commercial success, leaving South African film professionals to make a living mostly out of their work on commercials and other international productions. “If we want to grow our own industry and not just become international service providers we need to invest in developing our audiences.”

The Black Filmmakers Film Festival have a vision for this, and with a branch currently operating in Port Elizabeth, the immediate plan is to go national. They're currently looking to set up branches in other major cities like Johannesburg and Durban.

Nkula is adamant that they breach the South African border and believes that the BFFF has the potential to promote black filmmaking as far and wide as possible. They've already started developing projects that take film out of the city. For the BFFF team, African film should be a community-oriented experience. Their upcoming event, Ndim Ndim ("This is me for real"), is a screening of a collection of short films by prolific Kenyan director Jim Chuchu, hosted in the homes of six families on the street where Zum grew up in Gugulethu.

Audiences from Cape Town are offered transport to the screenings and are also invited to a traditional chisa nyama (barbeque) hosted by the participating families. The unique nature of this event cannot be understated. Film platforms that are popular within the CBD rarely reach beyond spaces of privilege. Zum explains initiating the event after thinking about how the collective could use their skills to empower their communities. He describes pitching the idea to his neighbours, with the hopes that Ndim Ndim will give rise to further ideas on how communities can develop partnerships that stimulate creative entrepreneurship.

Furthermore, Chuchu’s films bravely express the narratives of LGBTQI people in Kenya facing sanctioned homophobia, persecution and violence. The BFFF felt that the content would stimulate urgent discussions to combat homophobia throughout Africa and the South African scourge of corrective rape.

Indeed, the future is bright for this inspiring collective of young, gifted and black filmmakers. If the revolution is not to be televised, perhaps it will be screened.

Kelly is a writer and performer who works in film and theatre. She is pushing for the insurgence of black, female narratives in the media. She also co-runs a Not for Profit company called FEMME.