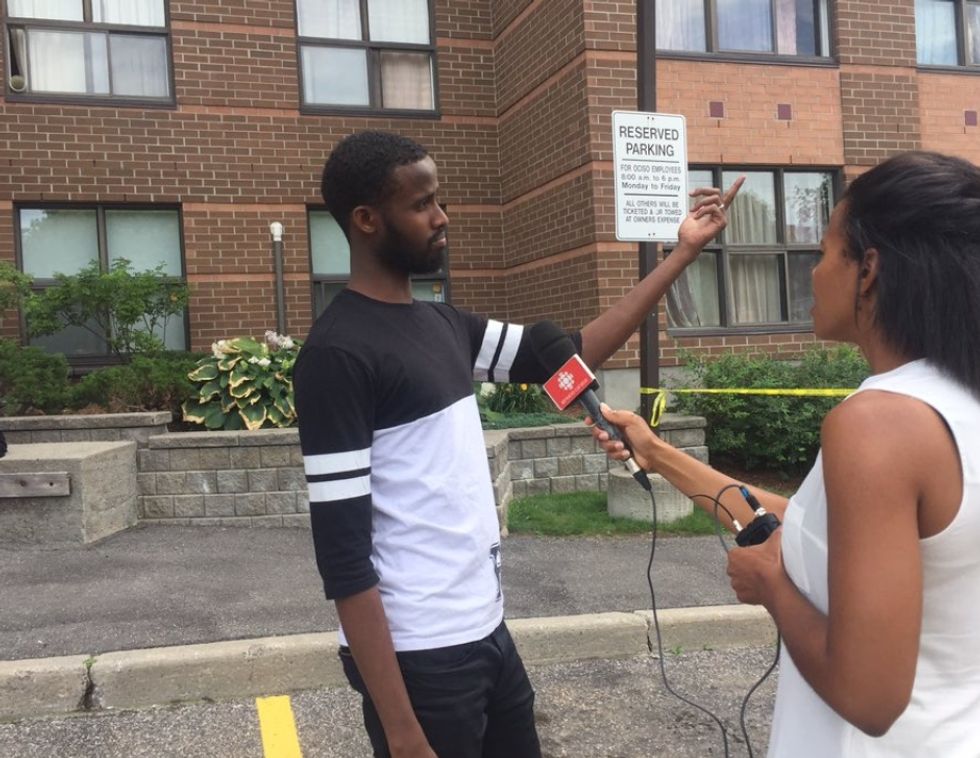 UPDATE: CBC News reports that Abdirahman Abdi has died from his injuries, according to his family. Ontario's police watchdog, the Special Investigations Unit, has confirmed Abdi's death. A family representative says the hospital waited 45 minutes before informing Abdi's family that he had died.

A family representative said the hospital waited 45 minutes before informing them #AbdirahmanAbdi, had died. pic.twitter.com/VH3N8DQUbu

For those of you who have been swearing up and down that you’re moving to Canada if Donald Trump becomes the next U.S. President—wait, not so fast.

A 37-year-old Somali-Canadian man with a “mental capacity issue” has been taken to the hospital in critical condition Sunday following an attempted arrest, Ottawa Citizen reports.

SIU started an investigation into arrest of an Ottawa man, appealing for witnesses. https://t.co/0vmbWjVqWe

Sunday morning, police were called after reports of groping at a coffee shop. When the two police officers confronted Abdi, it’s alleged he led them on a foot chase and “at some point during the confrontation, [he] suffered medical distress” and was taken to The Ottawa Hospital’s Civic Campus. However, witnesses say Abdi was pepper-sprayed and brutally beaten with a baton by the police officers.

"I heard the screaming, and then I come out and I see my brother lying down, police hitting so badly. Like, I've never seen something like that in my life,"Abdirizaq Abdi, the assaulted man’s brother, says, according to CBC News.

Sound familiar? It’s very similar to the instance of police brutality in France that sparked several days of riots north of Paris last week—police claimed Adama Traore, a 24-year-old black Muslim man, suddenly died from “a serious infection” while they arrested him.

The tragic situation involving Abdi comes as Black Lives Matter has gained traction in Canada too, especially in light of outrage over recent police killings in the U.S. of Alton Sterling, Philando Castile as well as last week’s shooting of Charles Kinsey, who had his hands up and was providing assistance to an autistic man.

For example, Black Lives Matter Toronto called out anti-black racism in the LGBTQ community. BLMTO staged a sit-in during Toronto’s Pride Parade on July 3, bringing it to standstill. The organizers refused to cease until the Pride Toronto representatives agreed to sign a letter of demands, which included the the banning of police floats from future parades.

“The presence of police might make some of y’all safe,” Rodney Diverlus, BLMTO co-founder who identifies as queer, says through a megaphone. “But it makes a whole lot of people in our community unsafe. And if you’re down for an inclusive Pride, you are down for a police-free Pride.”

The executive director of Pride Toronto Mathieu Chantelois eventually signed off on BLMTO's demands, so the parade could resume, but the onslaught of racist vitriol and death threats that the chapter received following their act of civil disobedience is appalling, and reinforces the necessity of the black lives matter rallying cry.

These events suggest Canada is not a sanctuary from police brutality or anti-blackness, as some may like to believe. They are part and parcel of white supremacy, a global system that we live in.

If you can stomach another video illustrating police brutality, see below.