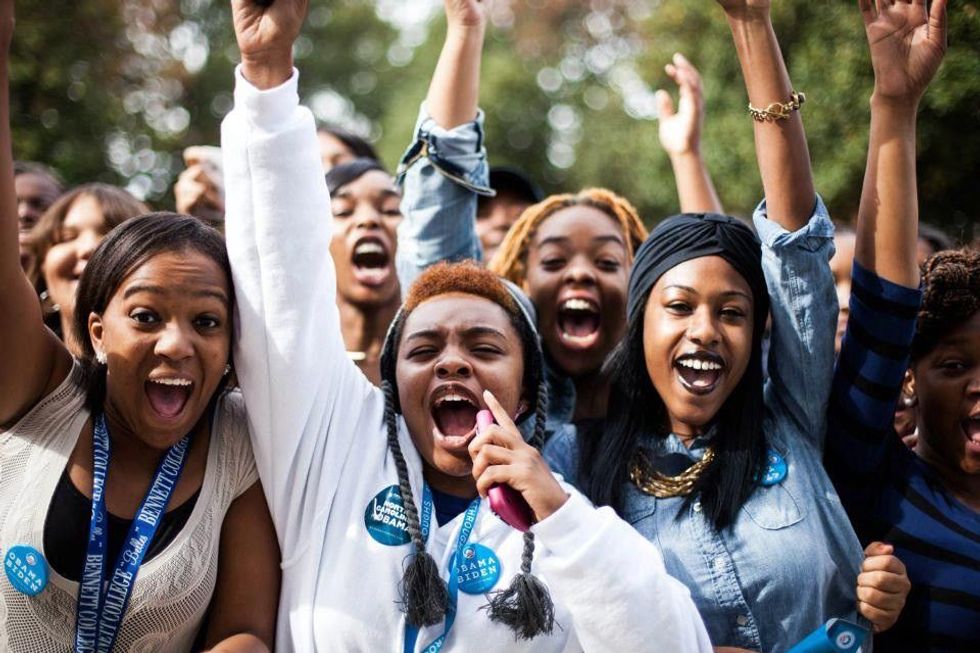 "If it were left to White people, Donald J. Trump could literally become president," writes Derrick N Ashong ahead of Tuesday's election.

This op-ed originally appeared on Medium under the same title, "A Secret Letter to Black Millennials: Everyone Else Should Just Stop Reading Now." It has been republished here with permission from the author, Derrick N Ashong.

I’ve been thinking about writing this for a couple of months, but I’ve been busy and I figured you wouldn’t listen to me anyway. But it’s the weekend before the election, people are talking extra nonsense on Twitter, and I’m African and we stay opinionated so…here it is.

I keep hearing smart, progressive People of Color arguing that we shouldn’t be held accountable for winning or losing this election for a candidate like Hillary Clinton who doesn’t adequately represent our values. We don’t trust her, she said “super predators,” she got emails and what has she done for us lately?

I get it. No doubt she’s smart and capable, but we all know Hillary Clinton seems hella guarded, is probably not telling us “something” about “something,” and she might well be the first presidential candidate who would have been better off using Snapchat for official government correspondence.

Let’s be honest, we all like Obama better. He’s smart and cool, and every speech he gives sounds better than the last one. He’s like Al Greene without the grits. And now that he’s leaving, we’re seriously trying to figure out how anyone can measure up.

Fortunately, since this is a private conversation and no White people are reading this, I can tell you the straight up truth: no one is gonna measure up. A brotha stepped into the White House for the first time eight years ago, and is easily in the running for Top 5 Presidents of all time. I can already hear him singing a little Otis Redding or some Bill Withers when he gets inducted into the Presidential Hall of Fame.

Fact is, after saving the country from the worst economic crisis since the Great Depression, Obama will go down in history not only as our first Black president, but as one of our best presidents. Which of course is not surprising to us, as we all know we need to be twice as good as the next kid, just to get half the credit.

Hillary is no Obama. The “shimmy” is cute, but it doesn’t really compare to the “swagger.” Still, I want you to vote for her anyway. Here’s the part where I insult you because I’m African.

You guys are super politically immature. And by “you” I mean you and your friends and parents and just about everybody you know. Don’t be too offended, I don’t think you’re dumb. (Notice I’m not writing to the Trump voters.) But I feel like some of you have got this whole politics thing hella twisted.

See, for the rest of the world, politics is basically a gladiator sport. The winner gets the glory. The loser gets executed, along with his Facebook friends. The people learn to dodge bullets and not talk about politics in public, lest the wrong opinion find it’s whispered way back to the right people to torture you.

You guys are mad that the candidate being thrust upon you believes in climate change and wants to give you tuition-free college at public universities. In the real world, that’s not a bad place to start…

Meanwhile in “The Upside Down,” creeps a loud, orange salesman, smelling strongly of snake oil, who wants to grab America by the p*ssy, because he thinks he can get away with it. And strangely enough, it turns out that maybe he can. There are enough low-information, low-moral fiber and professionally partisan voters out there that the guy might have a shot. Add to his duffle bag of reprobates the outright racists who swear he’s the second coming of the Third Reich and you realize an important truth about our country:

If it were left to White people, Donald J. Trump could literally become president.

And that’s why I’m writing you guys this secret letter. It’s not because I don’t get why you’re ambivalent. It’s because I want you to help me save the White people. Mind you, I’m not doing this for altruistic reasons. You know those horror movies where the teenagers’ car breaks down in the woods and Becky and John wander off to look inside that ominous cave, while Althea and Craig are like “why don’t we just call AAA?” But lo and behold, Becky got the car keys, so everyone is stumbling through the woods looking for her dumb ass nonetheless…

As of right now, White America still has the car keys. But People of Color America has the goddamned sense. And since we are all presently riding in the same vehicle, it is incumbent upon YOU to keep Becky out of the cave and on the road, so you can get home in time to watch Scandal. Despite Blacks, Latinos and Asians not being the “majority” in this country, we currently hold a very special place in America. Today, White America is almost evenly divided between “pretty cool” and “batshit crazy.” (If you don’t know which is which, just put two White people together and ask their opinion on anything other than OJ —the difference will soon be clear.)

Left to their own devices a good 60 percent of White America will tend to tip towards batshit crazy. (Don’t be alarmed, it used to be 90 percent —we’re on the right track). That means you, Youngman Brown, are in the rarefied position of being the tiebreaker. And as it turns out, when People of Color America gets into the conversation, things tend to tip towards 55 percent "pretty cool."

In other words, whether you like it or not, the fate of the known universe once again rests in your hands.

Now I know you’ve got principles and values, and you ain’t here for all that, and you had a dream that someday all wo(men) would be judged by the content of their character, and you don’t believe in citations or plagiarism, yeah, yeah, I get it. But the KKK just endorsed the other guy. The same folks who used to lynch us. The people who are quite clear that to them, Black Lives Don’t Matter. The descendants of the Original Super Predators —the ones who crossed half the world to steal people away from their families, drag them hogtied across oceans and force them to work without pay, only for their descendants to claim said people were lazy and were lucky they got picked for the free trip in the first place.

Your ancestors fought the relentless ignorance of these people with every weapon in their arsenal, sacrificing life, limb and liberty, most often armed with little more than the indomitable will to triumph against all odds. And today, you are being asked to get your ass out of bed and cast a ballot for free college.

I’m not here to give you a pep talk. I’m here to ask you to not be an asshole. Y’all want a revolution? Move to Syria. They are deep in the middle of it. But if you want real, progressive, sustainable change, take a cue from the people who made America great in the first place, and exercise the right they lived and died for. VOTE.

To be specific, Vote For Hillary. And then tell Becky with a firm hand and sisterly love, to get her ass back in the car because Orange will not be the new Black this year.

Derrick N Ashong (DNA) is a musician, entrepreneur, founder & CEO of amp.it, creator of two-time Emmy finalist The World Cup of Hip Hop and band leader of Soulfège. He grew up in Ghana, Brooklyn and the Middle East.