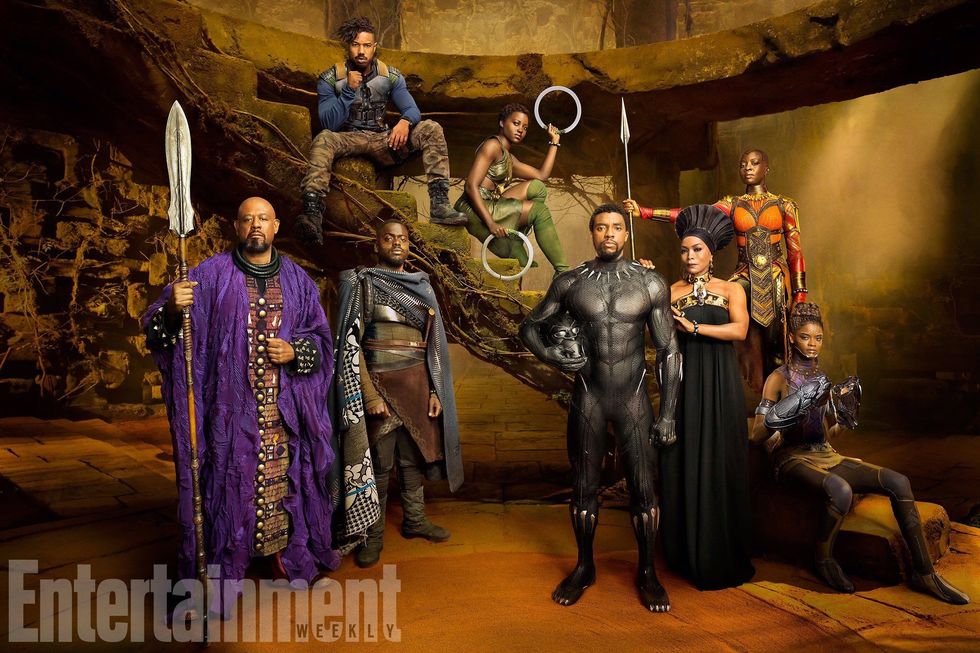 DIASPORA—Our excitement for Marvel's Black Panther only continues to grow.

Today, Entertainment Weekly released its Comic-Con preview issue, and it features none other than the Ryan Coogler-directed film's stellar cast. On it, Chadwick Boseman poses as T'Challa along with Lupita Nyong'o as Nakia and Michael B. Jordan as Kilmonger.

Aside from the stunning new photos, the issue also reveals some exclusive details about the upcoming film and an in-depth synopsis that has us overflowing with anticipation. Here is all the new information that we received from the Entertainment Weekly story.

Enter the world of Wakanda. Your exclusive first look at @MarvelStudios’ #BlackPanther is here: https://t.co/wg27hKeht9 💥 pic.twitter.com/4UWcR3PWl4

"Standing by his side is Oscar-winner Lupita Nyong’o’s Nakia, a covert agent whose job is to stifle word of Wakanda’s secrets, hunting down its enemies with deadly force," reads the synopsis.

"T’Challa’s homeland is the site of massive natural deposits of Vibranium, the near-mystical metal that comprises Captain America’s shield, is woven into his Black Panther, and has allowed the people of Wakanda to make technological leaps nearly a century ahead of the rest of the world."

"But as T’Challa learns upon ascending the throne, the minute others know you have something valuable, someone will try to take it from you. In self-defense, Wakanda has closed itself off from the other nations of Earth, maintaining a false front that it’s a mere third-world nowhere – full of mines, farms, and jungle creatures. The truth is, its mines produce the rarest, most precious metal on earth, its fields grows the Heart-Shaped Herb, a Vibranium-enriched plant that grants its leaders superhuman strength, and its jungle creatures provide inspiration for one of the sleekest superheroes to ever leap from the page to the screen."

"One such foe is Michael B. Jordan’s Erik Killmonger, a dissident from the country and aspiring prince who has colluded with a hostile foreign adversary in a bid to bring down the rightful heir to Wakanda’s throne."

"The enemy Killmonger has aligned with is Andy Serkis’ Ulysses Klaue, the Vibranium poacher last seen having his arm sliced off in Avengers: Age of Ultron. He has replaced the appendage with a piece of sonic mining equipment stolen from Wakanda, but the real danger is what he could tell the outside world about the nation’s secrets.With Klaue and Killmonger joing forces, T’Challa already faces an ominous external threat, but there is also unrest among the tribal leaders of Wakanda, who fear the young king is repeating his father’s mistakes by engaging too much with the outside world."

Has a film ever looked so beautiful? #BlackPantherhttps://t.co/BTnuG5z7u6pic.twitter.com/jnJfM3S7PN

Unlike in most superhero movies, in Black Panther, good and bad aren't so clearly defined.

"In this movie, a lot like politics, it’s a little tricky to define who’s [a good guy],” Coogler told Entertainment Weekly. “The film very much plays with those concepts, looking at conflicts and different motivations, and who’s with who.”

Black Panther is shaping up to be one of the most groundbreaking films of the year. February 16, 2018 can't come soon enough. For more, check out 20 new images from the film.

Thanks to @EW we have a first look at #BlackPanther's #ComicCon cover and our cast. https://t.co/JQWj3TUHce#WelcometoWakandapic.twitter.com/1n4LDOoFwS