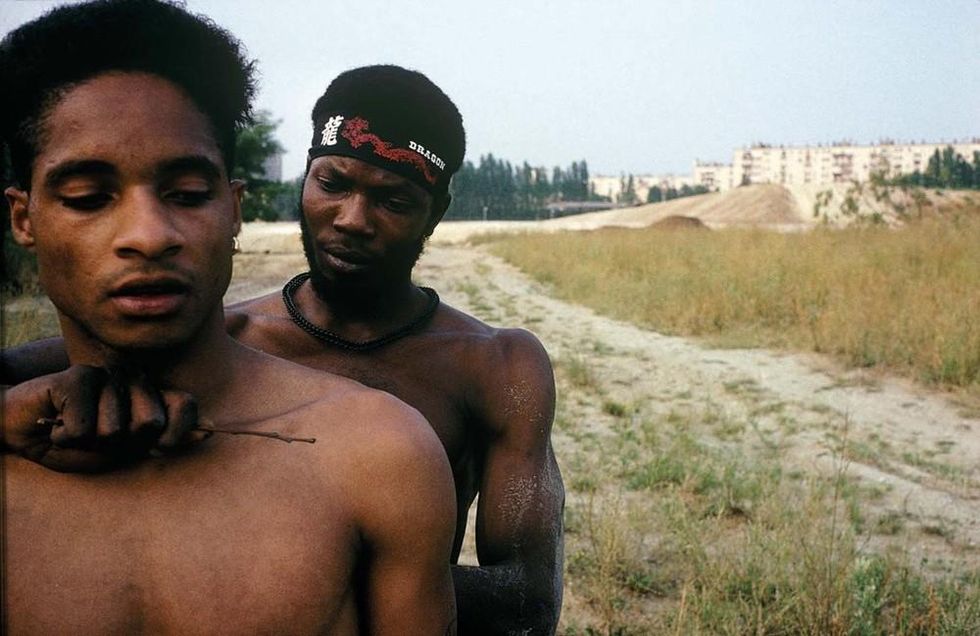 The Black Dragons created an alternative politicized space to stop the terror spread by skinheads in 1980s Paris.

The first part of the series is a portrait of the Black Dragons and their fight against racist skinheads in 1980s France.

Many French black punks don't gather in groups as they don't feel the necessity to further ostracize themselves from a punk scene that's already not so welcoming of non-white faces. Throughout the years, though, a few black indie punks groups have emerged such as Mau Maus in the 1980s or the still active Zenzille.

One of the closest things France had to a black punk community was the Black Dragons, a group united by a will to fight back against racist skinheads and a strong sense of belonging to the Parisian suburbs.

The Black Dragons were an anti-fascist group formed in the 1980s in the northwestern Parisian suburbs. They were initially founded in the U.S. during the late '70s, largely influenced by the Black Panther Party.

Before the French branch was created in Paris, two black groups dominated the scene: the Del Vikings and the Black Panthers (named after the American party). These groups have been portrayed in Gilles Ellie Cohen's photography book Vikings &Panthers.

The Del Vikings were apolitical, focused on rockabilly music, the party scenes and a love of vintage American cars from the '50s. Many Del Vikings switched from flamboyant rockabilly to punk, like the young punk Petit Jean, who allegedly got killed by skinheads during a fight in Les Halles.

Indeed, racists and xenophobic attacks soared during the 1980s due to the rise of the far right party Le Front National and prominent fascists skinheads groups like the GUD and PNFE. They would patrol specific Parisian neighborhoods, especially Les Halles, a metro station and mall, attacking passersby.

They'd also attack people at punk gigs. In 1983, the skinheads launched one of their most horrific attacks: 'la chasse aux Beurs' or 'hunting Arabs.' The attack resulted in the deaths of 23 people.

Unable to get any type of protection from the police, groups of anti-fascist vigilantes appeared, like the Ducky Boys and, later, the Red Warriors. They chased down skinhead groups armed with baseball bats, knuckle-dusters and tear gas. The rise and fall of these groups is featured in Marc Aurèle Vecchione's documentary Antifa: chasseur de skins.

The Black Dragons' black and Arab French members were often working class, second generation children of migrants that came from the French banlieues. They considered themselves French, but were faced by racism in their streets and neighborhoods.

Invisible in a country that didn't seem to acknowledge them and lacking proper representation, these young people pledged allegiance to groups like the Black Dragons, which gave them a home and a purpose.

They were aware of the inherent institutional racism at play within the French establishment, but their main concern was the daily racist attacks Black and Arab people were victims of.

Hunting skinheads was, for them, more than a petty vengeance: it was a necessity.

The autobiography J'étais un Black Dragon (I was a Black Dragon) written by Patrick Lonoh, a former Black Dragon, describes the inner workings of the movement and the solidarity inside of that community.

Easily recognizable by their bomber jackets, the patches covering them and heavy Dr. Martens boots—an uniform they openly “borrowed" from their rivals after winning fights—the Black Dragons created an alternative politicized space to stop the terror spread by skinheads. They were supported by the newly created anti-racism movement SOS Racisme.

"...the Black Dragons created an alternative politicized space to stop the terror spread by skinheads."
One branch of the Black Dragons called “Miss Black Dragons" was entirely dedicated to women members, as a way to boost their members. They would only fight other all-female skinhead groups.

Music was also a component of the movement. Politically conscious French ska and punk bands like Les Beruriers Noirs, La Souris Déglinguée, and Laid Thénardier encouraged their fans to stand up against skinheads and hired 'antifa' groups to act as bouncers during their gigs.

With the explosion of hip-hop music in France in the late '80s and the decline of skinhead groups, more black gangs (called the zoulous) were formed, like the Mendys and Les Requins. The spread of these new groups led to a strong animosity and rivalry between them.

The Black Dragons grew a reputation of being a violent gang as they become subject to multiple controversies.

In the early '90s, a brutal row between them and their rival gang the Mendys lead to the death of Oumar Touré, a Mendys member.

Despite the fact that the Black Dragons punished their members for attacking women, ten of them were accused of sexually assaulting a young woman in the mid '90s.

Eventually, the war between gangs caused the Black Dragons to disband and disappear amidst scandals and legal issues with the justice system.

Nowadays, the members are middle-aged civilians who still maintain strong links to each other. The fights against skinheads have died down, but racism and xenophobia in France are still on the rise.