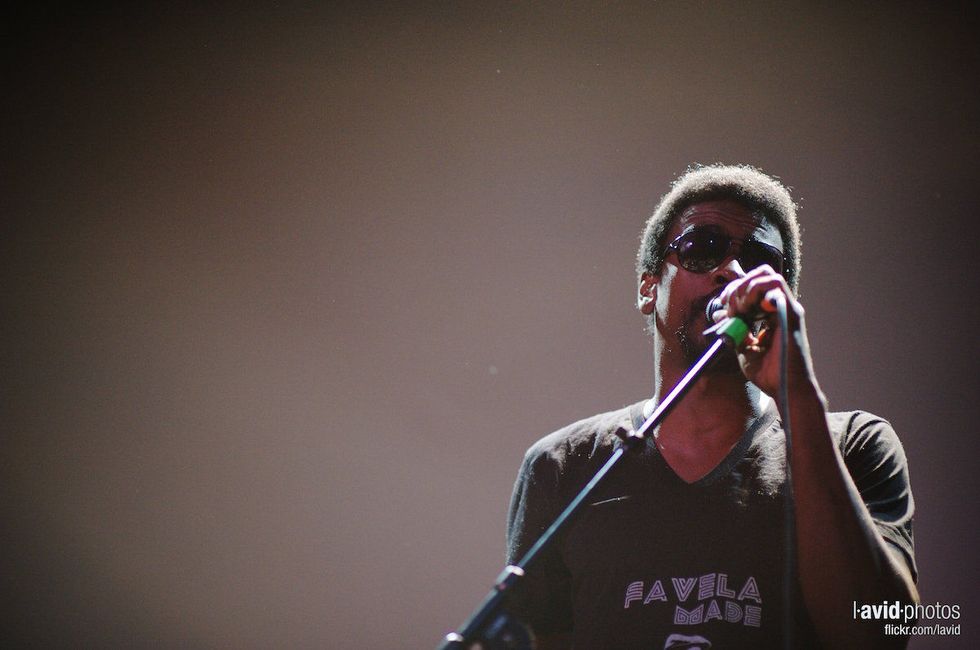 Racial segregation is a real issue in Brazil and rock spaces are a mirror of that. We take a look at the rise of Brazil's black punk scenes.

This third part of the series focuses on the rise of Brazil's black punk scenes. Revisit our previous installments in the series: a portrait of France's Black Dragons and South Africa's black punks.

Seu Jorge said in an interview that “rock music is not pro-black.”

Racial segregation is a real issue in Brazil and rock spaces are a mirror of that. For Seu Jorge, rock music didn’t come from the black neighborhoods in Brazil, and the most popular bands seldom had black members.

Behind this quite controversial quote lies a valid criticism of the rock and punk scene in Brazil.

Brazilian punk has a long and complex history, starting back in the 1980s, during the golden age of post-punk with pioneer bands like Innocentes, Legião Urbana and Mercenárias (a band made entirely of women) appearing mostly in São Paulo, Rio Grande, Rio de Janeiro and Brasília.

Few of these bands had black and mixed-race members. Post-punk was huge in 1980s Brazil and labelled as revolutionary, but it got little exposure elsewhere.

A new wave appeared in the 1990s, with more black bands like Dead Fish, Nação Zumbi, Gritando HC, and MystifieR.

They weren’t afraid of being political, tackling issues like poverty and discrimination. In the case of the punk-metal band MystifieR, they openly called themselves black supremacists and forbade any kind of discrimination, racism, or prejudice.

They fought against racist skinheads when they first started as teenagers in 1989. Once they got international exposure, they received backlash for being one of the very few black rock bands around. Nonetheless, they kept their mission of creating a safe space for black punks.

The punk scene spread around and grew bigger and bigger, getting into the mainstream scene. Some, like Pavilhão 9 and Câmbio Negro were heavily influenced by both punk music and hip-hop, making music that reflected both genres.

Many of the 90s bands like Devotos and Dead Fish are still active a few decades later. The writer Fred Di Giacomo, who created the fanzine Afrociberdeli@ and the Gluck Project wrote in his brilliant essay how the punk scene back then was lower-middle class and definitely not welcoming for black Brazilians.

Very few bands were fronted or had black members. To listen to black people, you had to be into hip-hop, samba, funk or bossa nova, which were more diverse: coming from working class background, or queer bands, or other parts of the country, like the Northeast region.

In a country where many claim that there is no racism due to its various existing communities and the high number of mixed race people, people of African descent are still kept under wraps, and seldom represented, even more when it comes to punk scenes.

The industry has changed, the scene has changed and became more popular and black punks aim to create even more safe spaces, with newer bands like Boca D and the thrash-crossover outfit Subcut Grindcore Sepultura, the latter having toured internationally.

For a while now, Afro descendants in Brazil have been on the forefront of a few movements aimed at celebrating their origins and bringing about better representation in the media, like Afrikfest in São Paolo (celebrating all kind of music), or Meninas Black Power, a collective that promote black beauty and natural hair in different Brazilian states.

The Facebook group Afro Punk Brasil was created in 2015 by Renato Oliveira, inspired by the documentary Afro Punk, as a way to gather punk enthusiasts of black descent in Brazil and create a community. They’re not affiliated with the festival, but define themselves as a cultural movement using music, dance and art to celebrate the contributions to the music and fashion scene of people of African descent.

So, what is next for the black punk in Brazil? With other musical genres like hip-hop becoming more popular, will the punk scene remain segregated? Or will a new, bigger one appear? With so many movements made by and for Afro descendants, punk music is not the focus anymore. And in a way, it’s not so bad.

Punk music in Brazil had for long lived in a very white space, and for half of a population that has been forced to stay silent for so long, assimilating that culture is no longer an option. Afro-Brazilians are creating spaces that go beyond punk, which may lead to new musical genres that will mix all these different influences to create something new, not so entangled in a past that hasn’t been relevant in years.