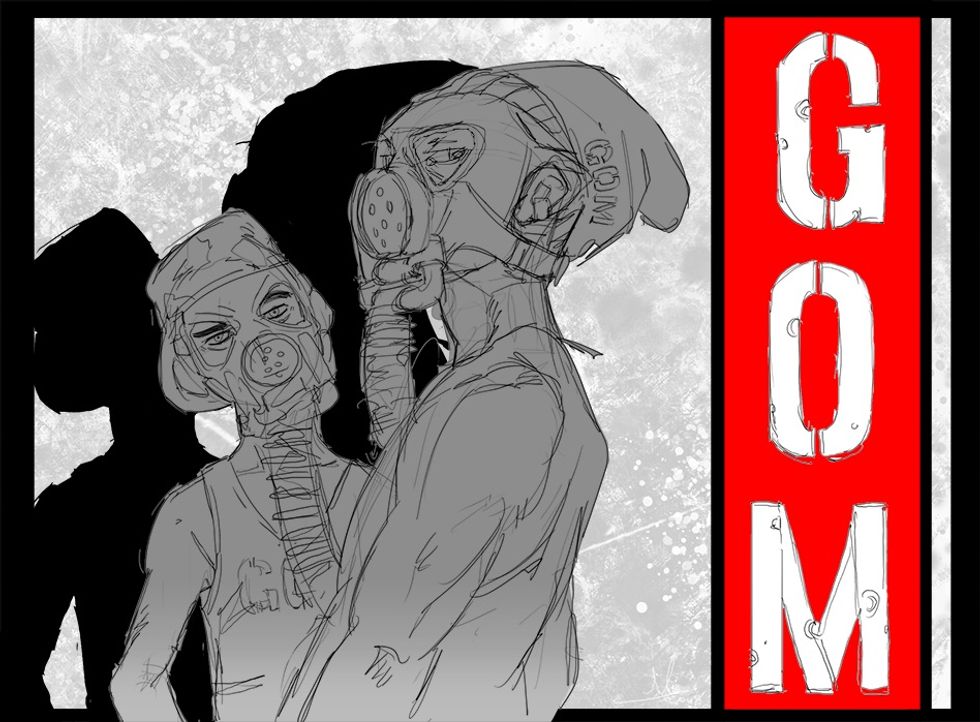 The General of Monrovia on being an immigrant punk band in the times of Trump and the true meaning of AfroPunk.

In real life, the Generals of Monrovia are three electrical engineers that relocated to Austin, Texas, from their hometown of New Westminster, Canada, in pursuit of recording and releasing their brand new EP, Immigrant Punk.

But in the parallel universe created by their music, the Generals embrace the identity of three survivors of the Liberian Civil War. With a heavy DIY aesthetic, the Generals of Monrovia use their band's music to speak to the politics of immigration and the music industry alike.

We talked to guitarist and vocalist General Sokah about the band's identity, their art, and how they use both in order to address the challenges presented to them in whatever universe they happen to be occupying at this time.

Your music is part of an ongoing conversation about the current political situation. How do your songs speak about the topic of immigration?

General Sokah: For various reasons the word immigrant has become a derogatory slang in the US vernacular, synonymous with 'takers,' 'criminals,' as well as other negative terms. Our latest release Immigrant Punk is an attempt to break the monolithic view of what makes an 'immigrant.'

Before we crossed the 49th parallel into the USA we, as a band, had collectively escaped authoritarian leaders, communist governments, war zones, religious persecution and poverty during our formative years. As you noticed we are not about proselytizing but creating a conversation even if the subject matter is uncomfortable and difficult.

What are some of the responses you've seen to the message you're putting out?

We've received the most amount of feedback from our song “Based on a True Story." This song is polarizing due to the underlying racial component to the lyrics and infamous comments from Governor LePage at the beginning. The most common question asked is “what are the races of the characters?" mentioned in the song. Those details, which I never provide, seem to determine if one likes or dislikes the song. Those new to our music seem even more perplexed when they find out the roles and racial makeup of the band. The song makes one question how we judge a scenario based on preconceived notions and biases.

Let's talk the politics of the music industry. I have a copy of a letter you sent to AfroPunk in response to their rejection of your request for an article. One section in particular stuck out, in which you wrote:

“We are the true definition of AFROPUNK music and our new EP 'Immigrant Punk' is timely, relevant to your readers and aligns with your professed “political views" toward the current administration and its treatment of those like me. We are a band made up of recent immigrants to America, September 2016, who are unable to tour internationally due to fear of the Trump Administration travel ban."

This letter speaks to what artists can and should expect from outlets that support them. Do you have anything to say about AfroPunk in this context?

First off, calling AfroPunk “punk" is like calling Rachel Dolezal “Black." AfroPunk had a unique opportunity to showcase aggressive guitar-oriented music by black contemporary artists from around the world. It could have been the inspiring voice of a growing and very poignant subsection of punk rock but they have chosen another path which is confusing to say the least (e.g. AfroPunk Festival Artist Lineups).

Currently, I don't know what they stand for or how their current activities relate to the 2003 documentary but the response to our letter outside of that publication has been only positive.

What, for you, then, is the true definition of Afropunk music?

When I saw the AfroPunk documentary I identified instantly with the movement and convinced the band to associate ourselves with the term AfroPunk. For me, AfroPunk meant being the fringe of the fringe. Unfortunately I made the classic mistake of blindly believing in a movement before vetting said movement. As of today we don't associate with that term.

Our initial approach to conflict is quintessentially Canadian, be aggressive but don't be overt assholes. From our experience if you merely attack, people tend to dig in their heels and stand their ground—right or wrong. So we thought let's challenge AfroPunk, have them explain themselves hoping to get insight to their train of thought. Sadly we missed the mark in our approach as the response from them was contradicting, awkward, dismissive and disheartening.

My follow-up to their response was all Guyanese and only Canadian in grammar.

How has the Trump administration's travel ban affected you?

All plans to tour on this record have been canceled as of last week. Without getting into details it's hard to run a small business, which is essentially what this band is, when members of your band and crew lose freedom of movement purely based on their age, skin color, religion or perceived beliefs.

We plan tours months in advance and when you have a fluid situation that we see ourselves in today we are deemed a liability to promoters and clubs. The guys have remained optimistic in lieu of what's going on and we're writing new songs with the possibility of entering the studio later this year if Immigrant Punk continues to perform well.

What changes would you like to see on a global level for immigrants?

What I may want to see might not be the best plan or provide the best outcome. All I can say is immigration is a complex issue and one should never trust any person that offers a simple solution. Such a person is either naive or evil.

Let's talk about your names. By dubbing each member of your band 'General,' it seems you're tongue-in-cheek mocking punk's anti-authoritarian, anti-regime stance. I also read that your name in part pays homage to Liberia.

Yeah, you kind of nailed it. Generals lead young men into battle, and those who follow them are not supposed to question their authority. Using General names is mocking that command hierarchy.

We also try to keep perspective with regards to the world and how lucky we are to be in America. We understand that our daily struggles are minuscule compared to others so that is why we decided to reference a place like Liberia. That country has had a very rough past, I'm praying that their elections in October will bring positive change.

Are there any stories you can share that speak to your uniqueness as a band?

All members of the band have earned Electrical Engineering degrees, per our parents requests. To be honest it was more of a demand than a request, we literally didn't have any say in the matter. We were raised with the somber knowledge that we stand on the shoulders of those before us who sacrificed everything to give us something. Thus we are grateful for the freedoms allowed to us and speak to protect what we see many have begun to take for granted.

Is there anything you would like to add about the current administration and the way it's handling immigration?

Well, we've seen this kind of rhetoric and tactics before and it never turns out good. For those who have no issue in the handling of immigration currently in this country I submit a more high level view of the situation.

The current administration is suggesting hiring thousands of law enforcement personnel to round up and get rid of 'undesirables.' Regardless of the impact this may or may not have on the economy, if this administration is successful in its mission, will all these newly hired law enforcement employees suddenly quit their well paying jobs and try to secure new employment elsewhere? Do we just stop funding these people and lay them off since they are no longer needed? I highly doubt it, most likely they will look for a new target within our borders as a means of self preservation. Once that infrastructure is setup it's hard to dismantle, and the next perceived 'undesirable' could be any of us.

As John F. Kennedy said, “The rights of every man are diminished when the rights of one man are threatened."

The Generals of Monrovia's 'Immigrant Punk' EP is available now on iTunes and Bandcamp.