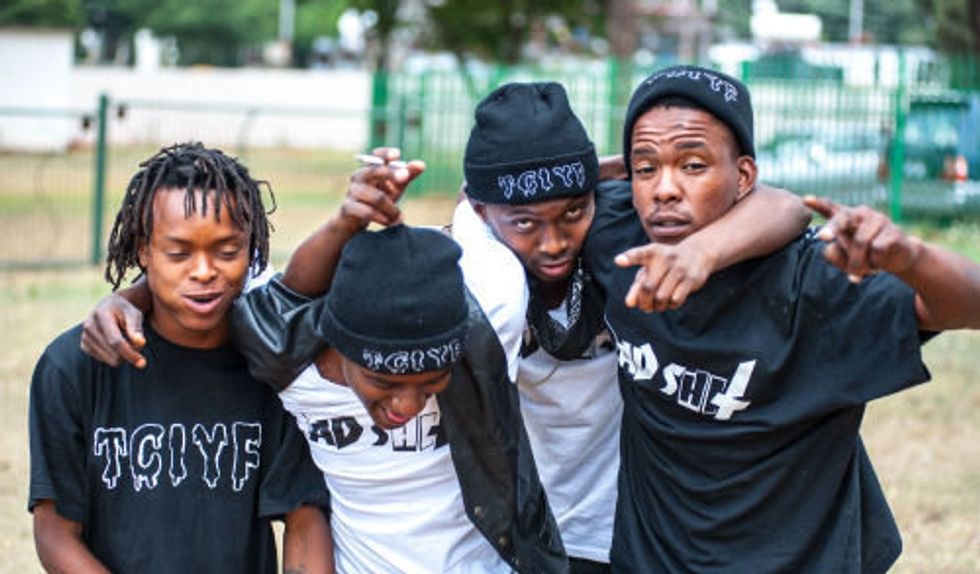 Soweto and Johannesburg's punk scenes are dirty, crass and raw—and some of the most authentic out there.

This second part of the series turns it lens towards Johannesburg and Soweto's thriving punk scenes.

To be a black kid in South Africa and make the choice to be apolitical, anti-establishment yet carefree requires a heavy dose of courage, determination and a “don’t give a fuck” attitude.

As the punk band TCIYFhas mentioned “I would rather go and skate than waste time standing in a queue to vote."

Whether or not you agree with that statement, in a country that’s still healing from its past and its racial divide, whose black youth is frustrated by the little opportunities available and forced into a path they don’t see themselves in, punk has become a way for many to express their disillusions about the system.

They may not challenge it politically, but they definitely do not abide by it either.

To strip yourself of the labels society puts on you, to refuse to wear a suit, refuse to work an office job, to decide to live your life without “giving a fuck”—this is what punk used to stand for back then.

Those are the values of the punk communities in Soweto and Johannesburg. The members of these small communities have more affinities to a type of music and lifestyle, which contrary to South African hip-hop and house, is more rebellious, daring and used to be heavily marginalized. It’s time to take it back.

Punk appeared in the UK and the US more than 40 years ago. The kids who created it have long since made it into the establishment, apart from those who didn’t die from overdoses and suicides. You can see their remains in museums and documentaries, and long for a time when Vivienne Westwood’s clothes where affordable. That time’s not coming back.

Thankfully, punk’s not dead and you can find it in Soweto.
The homegrown South African punk scene has been thriving since the 1970s, with precursors such as National Wake and later on Hog Hoggidy Dog and The Rudimentals. But just as in many countries, the punk scene was overwhelmingly made up of white Afrikaans, as if writing songs against the establishment and being a part of a culture that celebrates youth taking matters in their own hands was reserved for those who were of a white background. But things are changing.

The new scene stands out because it’s mostly been created by black punks who have reclaimed the movement, and joined up with the usual white punks—no, punk doesn’t have to be white or pro-establishment. This new generation’s goal is to change the punk rock music scene in their country, while also having fun, getting drunk, and getting laid.

South Africa’s punk is dirty, crass and raw—and one of the most authentic out there.
Of course, the community wouldn’t exist without the music. The most famous bands are TCIYF, who pretty much created the scene in Soweto, as well as others such as Brainwreck and Death at the Party.

The punk community in Soweto began when a group of skaters formed Skate Society Soweto in 2011. They released videos on Youtube and got international coverage from photographers witnessing the first steps of a skate culture in the city. Four of them would later form TCIYF.

The brand Desolated Clothing was also created by a few skaters. A self-professed lifestyle clothing company that shoots skaters for their Dirty Wednesday skate days.

The punk scene is pretty small there, hence the necessity for people to organize themselves to make sure that the culture will thrive. If anything, their brand of punk is as close to the roots of movement as one can be. After all, punk is all about DIY. if you can’t bring the music to the city, make it yourself.

In July of 2013, TCYF who had become the faces of the punk community in Soweto created Soweto Rock Revolution with Moose “Mbuso” Zulu to gather rock music lovers from the area for a “heavy live music and skateboarding event.”

They debuted the festival Punk Funk later that year as a platform for both local and Johannesburg-based bands to play for their fans and for skaters from the Skate Society to compete. Three editions have followed since then and the Soweto Rock Revolution is still alive and thriving.

Even though most of the actual punk scene hails from Joburg, the scene is Soweto is more diverse and booming. Hence so many transplants coming to the regular punk rock nights organized by Soweto Rock Revolution in skate parks. Punk Fuck has been featured in both local and international magazines.

Does that mean fame is on its way to steal its authenticity?

Not really. The scene has grown, but remains self-contained in Soweto and new groups are formed regularly, many of them learning how to play instruments on-the-go.