Black Social Photography in South Africa: Before & After 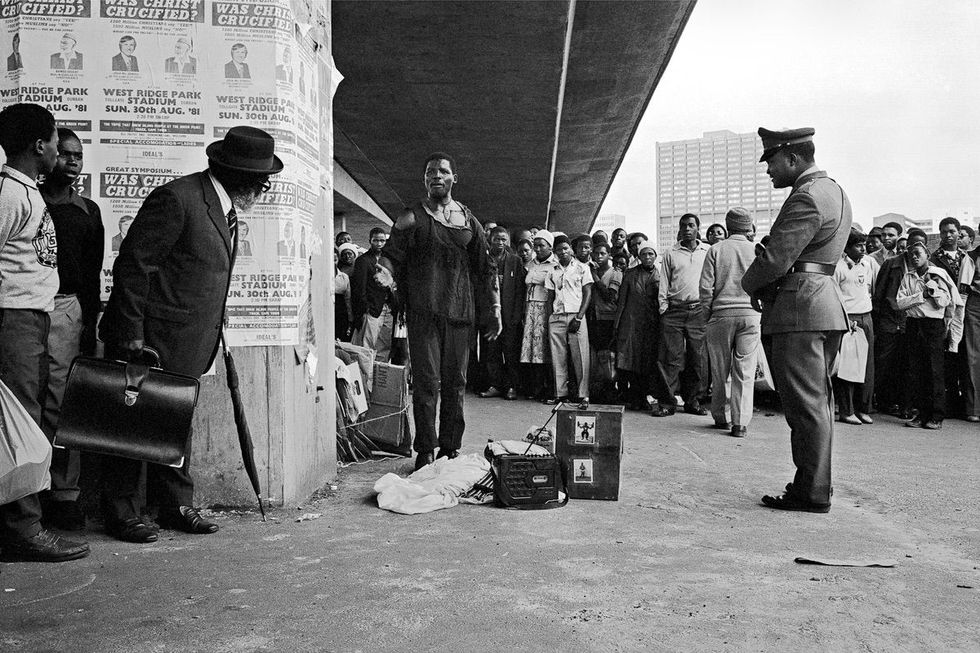 A before & after picture of South Africa, as portrayed through the photographs of some of the most influential black South African social photographers.

The earliest photography in Africa can be traced back to the colonial cultural anthropologists of the mid-nineteenth century. The intention at the time was to shock the Western world with imagery of savages. More than a century later and not much has changed.

The objectification of the black body is still a prominent feature of sub-Saharan African documentary photography, especially in South Africa where a white lens remains surgically stitched onto our nation's face.

The camera tends to reveal more about who's behind the lens than who's in front of it. While connecting the observer to the observed, photography can also be used as a tool for emotional and moral detachment.

The voyeuristic nature of white photography in this country is a symptom of its privilege. The white documentary photographer is a voluntary tourist of the black experience, window-shopping through the pain and capturing the most aesthetically pleasing moments.

The white photographer profits off of poverty and shares poignant anecdotes of black stories. In the process the subjects become symbols of white altruism. Their entire lives are reduced to captions beneath a frame—a re-colonization by white liberal guilt. Artists like David Goldblatt, Jo Ratcliffe and Pieter Hugo—as pure as their intentions may be—both benefit from and perpetuate this phenomenon.

The conundrum of all documentary in this country, and on the African continent, is to address the erasure while avoiding the trap of defining ourselves by our scars. We as the ad-hoc anthropologists of the post-colonial epoch have a duty to document the epidemic legacy of oppression while exploring notions of African identity outside of these imposed narratives.

Documentary photography in South Africa is in many ways imprisoned by the narrative of pre- and post- liberation. During Apartheid our black photographers had a duty to document the silenced brutalities of the regime. Since the end of Apartheid, our contemporary black photographers have found themselves obligated to portray an after picture, and by definition one which positively juxtaposes itself to a gruesome predecessor.

This explains the ever-more popular yet problematic trend of portraits of township hipsters as a pseudo-political fashion statement meant to shatter preconceptions about Africa but instead just replacing one simplistic view of Africans with another more palatable one.

What is the subtext here? That we must be free because we're wearing skinny jeans now? This is not to diminish the value of 'street fashion' photography, but it's necessary to interrogate the notion of portraying the ghetto as a catwalk when there are deeper socio-economic factors at play beyond the borders of these images.

In South Africa, our artists still have to assemble their voices from the screams of their ancestors and the accents of their oppressors. There are however a broad range of black documentary photographers from the past and the present who've managed to defy the dialect and create work which represents our pain without patronizing it, conveys our joy without canonising it and deifies us without dehumanising us.

What follows is an accurate and Africanist before and after picture of South Africa, as portrayed through the photographs of some of the most influential black South African social documentary photographers.

Santu Mofokeng's work is some of the most conceptually layered of all the documentary photographers. With a career spanning from 1989 to present day, his body of work actually falls under both categories. He's well known for his method approach to social documentary. He lives in the community of his subjects, earnestly learns its customs, history and routines in order to become an inconspicuous part of it for weeks, sometimes months on end, before he even sets up his camera. As a result, his images are a hard-earned reward bestowed upon him by his subjects; an invitation into their lives as opposed to an invasion of them.

"During a 'swoop,' police are everywhere, checking passes. A student who said he was going to fetch his textbook is pulled in. To prove he was still in school he showed his fountain pen and ink-stained fingers. But that was not enough; in long pants he looked older than sixteen." Caption from House of Bondage. © The Ernest Cole Family Trust Courtesy of the Hasselblad Foundation.

As one of the first black professional photographers in South Africa, Ernest Cole was arguably the earliest photographer to project an accurate panorama of Apartheid. His images evoke the horror of time when black lives were disposable. Too often the most heinous atrocities of the past are reduced to words, and with words unlike with pictures, too often the definition is taken for granted. To the so-called 'born free' generations Apartheid has become nothing but a word; a vague reference to something terrible but locked in the past. The textbooks have made the experience academic, pontificated and palatable enough to be memorized without actually being remembered. Cole's iconic photographs counteract that emotional detachment from our history.

"Pensive tribesmen, newly recruited to mine labor, await processing and assignment." Caption from House of Bondage. © The Ernest Cole Family Trust Courtesy of the Hasselblad Foundation

No caption known for this image. © The Ernest Cole Family Trust Courtesy of the Hasselblad Foundation

There is probably no single photographer more influential in the field of documentary in this country than Omar Badsha. As the founder and director of South African History Online, he is on a lifelong campaign to digitize black South African history. He's taking less figurative steps to correcting the erasure than his contemporaries. His own images are characteristically tactile. He extrapolates the textures of black and coloured poverty. His subjects all seem to be deep in thought, contemplative, awaiting a revelation that never arrives. He's a master of visual composition: All his iconography is symbolic, necessary, representative of some element of the overall narrative he's portraying. He manages to capture the essence of township living: cluttered but vacant, turbulent yet stagnant, random and predictable. His images are the perfect window into the systemic disorder of oppression.

Omar Badsha, Dorothy Nyembe, celebrating after been released from a 15 year prison sentance, 1984.

Like most photographers of colour in the sixties, Cedric Nunn was fuelled by the pursuit to expose the damage done to black lives under Apartheid. In the process, however, he discovered an inextinguishable poise in the African spirit. As dispossessed as all his subjects seem at first glance they all have an intangible power about them, the irremovable nobility of abdicated queens and kings. The durability of blackness, something which not only endures all climates but thrives under them. His portrayal of rural black life in KwaZulu-Natal reminds us of the beauty of our land, our customs and the parts of our identity which we must never allow to expire.

Lindeka Qampi, from Inside My Heart, series in progress, 2015/2015. Courtesy of Erdmann Contemporary.

There's an uplifting air of optimism in Lindeka Qampi's images. Although set predominantly in rural and informal settlement communities where poverty engulfs the inhabitants like a ubiquitous cloud, all of her subjects seem genuinely happy. Not by any means content with their lives, but joyful. The picture she provides is that of a people whom have been wounded, but not beyond repair. In fact, that reparation process has already begun. You can see it in the resolve in their eyes and in the kaleidoscope of their surroundings. How they've converted these prisons into poems. Her work leaves you sad but singing, analogous to the dichotomous post-liberation black experience.

Lindeka Qampi, from Inside My Heart, series in progress, 2015/2015. Courtesy of Erdmann Contemporary.

Noncedo Gxekwa is known for her potent mystical portrayals of androgynous black bodies. Like the protagonist of contemporary South African photography, Zanele Muholi, she's particularly concerned with the gender construct of femininity. She first gained our attention with a collaborative photographic series with her identical twin sister, Nonzuzo Gxekwa. Since then she's stood out as one of the most exciting contemporary artists to emerge on the local scene. She interrogates preconceptions about gender and the body in such a refreshing way, choosing to invoke the spirituality of gender. Gender is invisible, incorporeal: it's what your soul knows not what your body looks like.

Noncedo and Nonzuzo Gxekwa in the ongoing Carbon Copy project.

Noncedo and Nonzuzo Gxekwa in the ongoing Carbon Copy project.

Masixole is a phenomenal young social documentary photographer with a fashion photographer's approach to his subjects. The result is a visual statement as politically profound as it is aesthetically pristine. His patrician-like portraiture of the proletariat and the unemployed, the desperate and the destitute, demystifies and devilifies them to the world. His compositions are clean and chromatically bold. He's only at the beginning of his career and already he's producing some really exceptional work.

Sabelo Mlangeni is preoccupied with the themes of African masculinity and isolation. The two go hand in hand especially pertaining to the history of urbanisation in this country. Black men were isolated from their family to go work in the mines during the gold and diamond rush of the late nineteenth century. Apart from being isolated from the only existence they knew, they were isolated from their manhood itself. They were sentenced to a permanent state of boyhood. Mlangeni explores this territory with a distinct sensitivity for the nuanced unlike any eye this nation has seen since Santu Mofokeng.

Andrew Tshabangu, Faithfuls at the station of the cross, Ngome natal, 2005. Courtesy of Gallery MOMO.

Christianity played a pivotal role in African colonialism. The colonial mass-evangelism of Sub-Saharan Africa was intended to deconstruct the African spirit. It was intended as a weapon but ended up being a shield. We resonated with the core themes of Christianity arguably more than its founders did. The notions of martyrdom: dying so others can be born free; and the Zionist notion of an enslaved people liberating themselves in order to reach their 'promised land'. One element of Christianity and the black experience which Tshabangu's work vividly explores is stoicism. How black people tend to pray quite differently to their white counterparts. Prayer is yet another part of our lives we viscerally suffer through. It's a transcendental ordeal as opposed to a formality. This is so apparent in Tshabangu's dramatic scenes of African prayer rituals. The worshipers become the worshiped. They're endowed with an unbridled divinity. Their devotion itself ends up being the miracle we as the audience get to witness. We become the believers and they the personification of belief.

Edward Kgosidintsi is an arts and culture writer based between Johannesburg and Gaborone. He also writes to provoke change and refract nuance to the African experience.