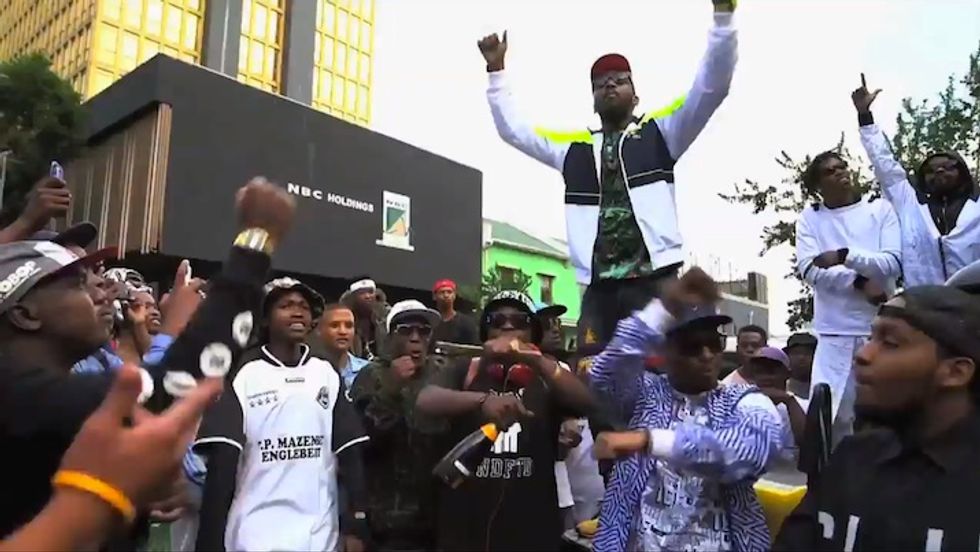 At the start of the week we shared an in-depth piece profiling the members of Johannesburg's influential culture collective, Boyzn Bucks. Consisting of rappers, producers, DJs, designers, sneaker-heads and creative pioneers, the 9-man crew is at the forefront of the current renaissance in South African street culture. Together, they say their aim is to export their home-grown street culture abroad as well as inspire the younger generation of South Africans in the realms of style, art and music.

With all this in mind, it should come as no surprise that the group was instrumental in popularizing a new South African slang word that directly translates to "swag" in Zulu. "Umswenko is a lifestyle that we, the youth of South Africa are all about," Okmalumkoolkat told Noisey this week. "It's based on excellence and random acts of nation building [coming together as South Africans despite our differences] in a fun, responsible way," he added. "It's all about boosting the confidence of our youth through knowledge of self and global awareness simultaneously. Like, 'Hey, a kid from Durban is as cool as a kid from Paris, or New York, or London.' We actually have more umswenko because we are not really following global trends anymore, even though we are aware through the interweb—we are leading."

Back in November Boyzn Bucks dropped their first single as a group. "Mswenkofontein," which featured production by seasoned Cape Town-based beatmaker Sibot, amassed a staggering 100k downloads in its first weekend. Yesterday the collective shared a fun, energetic video to go along with what has become Joburg's "Umswenko" anthem. Featuring Okmalumkoolkat, Stilo Magolide and U_Sanele, along with other crew members and a mass of young stylish associates and friends, the music video is a celebratory nod to South Africa's s’manje-manje street style and a vibrant expression of Boyzn Buck's strong collective spirit. According to a description that comes with the clip, "This is not a music video. This is a time capsule of what's going on in the streets of South Africa, specifically in the city of Johannesburg." Watch the new "Mswenkofontein" video below, directed by Okmalumkoolkat (aka Simiso Zwane) himself and shot by Lebogang Rasethaba, Mr. Channel Thirty and Sanele Mkhize.