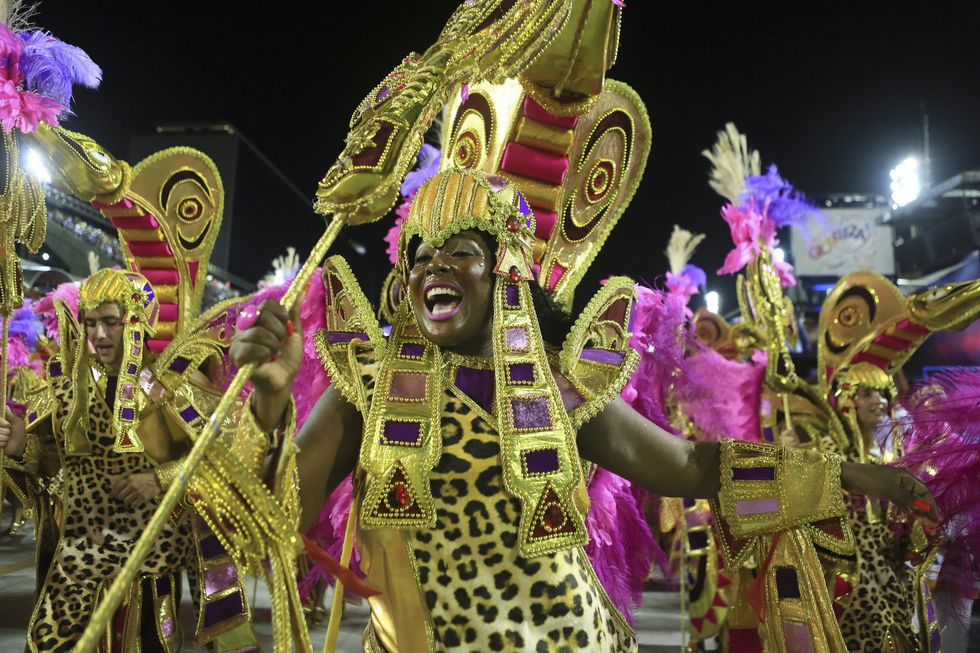 While Salgueiro didn't win this year's competition, they won the hearts of the people.

In the 1920s, poor Afro-Brazilians living in favelas created the samba school carnival groups that celebrated the music they had recently created—samba. While not technically schools, many do offer classes in samba dance and music. Over time these carnival groups developed into highly organized community groups that competed for the title of the best samba school every carnival. Salgueiro was created by black Brazilian members of two samba schools in Rio's Salgueiro favela and has won nine championships.

Between May and July, each Samba school chooses a theme for its parade and this year Salgueiro chose to honor African women with the theme, "Senhoras do ventre do mundo" (Women of the world's womb). Once the theme is chosen musicians compete for their song to be chosen by the school. The song has to reflect the theme and, of course, be good enough that people will want to sing it for 75 minutes—the length of the Carnival parade.

The Salgueiro samba school is known for presenting themes that link directly to Afro-Brazilian culture and history. Until the last 10 years, Brazilian schools didn't teach African and Afro-Brazilians culture and history, so many Brazilians learned about black history through samba schools like Salgueiro. In 1960, the school brought to life the theme "Quilombo dos Palmares," which told the story of the black independent community led by Zumbi that existed in Brazil in the 17th century. Other black themes include Xica da Silva (1963), Chico Rei (1964). These historical black figures are now well-known by all Brazilians. To develop these themes, Salgueiro always consulted with academics.

With the theme, "Senhoras do Ventre do Mundo," Salgueiro returned to its roots. To create the parade, which always consists of floats, costumes, dancers and a drum section, the school contracted two Afro-Brazilian women researchers, Kaka Portilho and Marina Miranda, who studied the works of academics like Cheik Anta Diop, Joseph Ki-Zerbo, Frantz Fanon, bell hooks, and Amilcar Cabral among others.

"The real work was interdisciplinary, spiritual and arduous. We risk and dare every minute of the intense hours of study and writing, demystifying and re-centering every concept invented to fix us in the place of primitive, a-historical and dependent people," Miranda said on Facebook.

The "Commissão do Frente," the parade's opening dance act, attracted the most attention on social media. Ten men painted in black performed a dance routine in which they, acting as women, birthed 10 black babies. It became the most photographed moment of the parade and while it was powerful to many, it created some controversy among Brazilians online who asked whether the performances was a kind of blackface. Salgueiro has not yet commented on the criticisms.

To bring the theme to life during the parade, creative director Alex da Souza created floats and costumes that represented some of the most powerful black women in Africa and Brazil. In one of the floats, about the queens of North Africa, a large sculpture represented the fertility goddess, Isis, nursing her son, Horus. He represented the opulence of Egypt in another float, which brought to life Kemet, the black land of Egypt. Black women who were warriors in history in the struggle against Portuguese imperialism were represented in another float, 'The eternal struggle'. The parade ended with a homage to the common woman, a float carried a black woman with her son in her arms, symbolizing the suffering of mothers who lost their children in urban violence. The Baianas are usually older women and are always represented in the Carnival school parade. They were dressed as the first mothers who crossed the African savanna millions of years ago, creating the entire human race. The Queen of the drum section wore a costume called Hatshepsut, a queen in the 18th Egyptian dynasty.

"The Brazilian black woman has historically been treated as an object just for work and sexual use, but the samba school wrote another story, the story that we really want to tell about us: as divine, ancestral, and powerful women," said Naiara Paula, an Afro-Brazilian woman who is studying for a doctorate in African philosophy.

For commentators and carnival lovers, it was the best parade that Salgueiro had mounted in a decade, when it last won. But it wasn't enough to win the championship, which went to the Beija Flor Samba school. The Beija Flor school put on a parade that highlighted Brazil's social problems and included groups of drug traffickers, corrupt politicians, intolerant religious leaders, prisons, and even children who missed school because of violence. In the end, Salgueiro's positive homage to black and African women couldn't compete with the current social ills of Brazil.