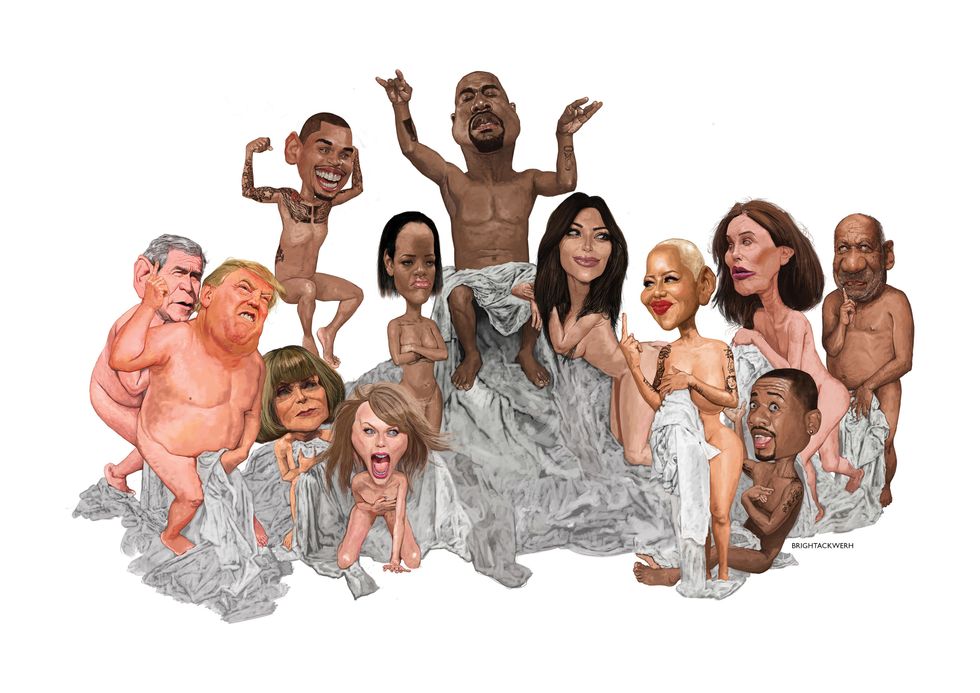 An in-depth conversation with the Ghanaian artist on his creative process and how his work contributes to socio political commentary.

Bright Tetteh Ackwerh is the 28-year-old satirical illustrator examining the world around him through his work. He livens Ghana's colorful art scene with his truths told through humor. The contemporary artist creates pieces that elicit responses that vary from conversations to debates.

Bright incisively tackles socio political and religious issues. Last spring, he published a piece that so infuriated the Chinese community in Ghana, a letter was written to the president and Minister of Lands and Natural Resources. In the image, China's president, Xi Jinping, can be seen doling out dirty brown water from a vase into bowls held by the Ghanaian president and the Minister of Natural Resources. Off to the side, Ghana's Chinese ambassador is smiling and holding a gold bar. Despite the fact he feels powerless about some of the things transpiring in the world around him, I hold he is unaware of the justice he is doing to his country and others with his radical critiques in the form of art.

'We Dey Beg' by Bright Ackwerh. Image courtesy of artist.

He even goes so far as to use pop culture to push his agenda. His jarring work is shaping perceptions everywhere. In 2017, he was given the honor of making the the top 10 list of artists in the Barclays L'atelier Art Competition and featured in CNN's "African Voices." He's presented his work at Chale Wote Street Art Festival, ARTXLAGOS, FNB Joburg Art Fair, and group shows in Accra, Paris and Los Angeles. The visual artist yearns to show his work everywhere an artist can. The aforementioned speaks volumes.

Audrey Lang for OkayAfrica: How would you describe yourself?

Bright Ackwerh: I come from a large extended family. There are always cousins around. My dad and my mom have 4 kids. I am the third one and the second boy. We are 3 boys and a girl. I went to school at Accra Academy until 2006 and went to KUNST in 2017. I left KUNST in 2015. I'm the only member of my family, that I know of, who is pursuing art.

You attended Kwame Nkrumah University of Science and Technology (KNUST) in Kumasi for both your bachelor and master's. What did you focus on while in school?

There is a painting stroke/sculpture option. Anybody who enters the fine arts program has to start with it. Then after a year, pick one. I chose to major in paint. I did the same thing for both my ungrad and my post-graduate.

Is it just general painting?

Yes, it's general but it's a more contemporary practice. The studies aren't confined by what is traditionally known as painting. Students are encouraged to explore beyond traditional boundaries of thinking, making, and showing work.

Painting isn't the only art form you are good at or have dabbled in. You've done graffiti; you've done sculpting. How many media do or can you work in?

I don't know what I can't do. I have painted, sculpted, graffiti—I still do graffiti, once in a while. Lately, illustrating. It's a matter of what is available and what I want to do. A particular medium would best suit a certain project. Presently, illustrating is my favorite medium to work in.

When did you decide that you were going to use your art to state your opinion?

I started doing this type of work in 2013. In senior high, I painted caricatures as portraits for fun. And while I was in school, a lot of things were happening in Ghana. If you know Ghana, you know that there are a lot of commentators who discuss politics. People call in to programs to express themselves. Political commentary, I believe, is a parcel of being Ghanaian.

For me to start painting my commentary was a very natural transition, especially because there are certain policies undertaken by the government that began to affect me in very direct ways. Between the time I applied to do my postgraduate degree and when I actually gained admission, tuition fees had multiplied by almost 800 percent. There used to be government subsidies for postgraduate students that someone got up one day and decided to do scrap. There were cries about corruption in the media.

There was this thing we call Dumsor in which the lights would go off at any time and come on days later. It seemed like no one could explain what was going on. A lot of other artists had started talking about these things with their work in music, film, etc. Illustrating, I felt, was how I can register my displeasure and critique these things that are happening.

Are there specific themes that you tackle in your work?

It's a general commentary on what sparks my interest. Also, it's a recording of my experience of the world. Any time I'm curious about something, if I want to say something rather than say it with words, I would like to say it in a picture. It is a questioning of who I am and what my position is in the world as a young african artist living and working on the continent. So many things have been said about myself and any time I encounter any of these things, I try to comment on them.

What is your creative process?

I am a trained painter. There are certain assumed canons in painting. A lot of my work is made digitally. I paint on my computer with a graphics tablet. It is what I would do if I was painting with oils or acrylics or watercolors There is a lot of preliminary drawing . There are sometimes photoshoots that go on in the back, before I work.

To find inspiration or subject matter, I reference a lot of popular culture because what I find in popular film and popular music, I think a lot of other people will consume these things. Sometimes I take elements from these other art forms and appropriate them in my work to try a draw connections to where they are coming from.

'Pray For Angola' by Bright Ackwerh. Image courtesy of artist.

For instance, your Nicki Minaj illustration?

The kind of image that Nicki Minaj has branded herself with, I may interpret these things and put them in my work so you can draw connections as to where you may have seen those things.

That painting I made in 2015 was at a time when the Angolan president was said to have paid her an amount to come in perform in Angola. It was a big story because it was something that was unheard of. It was in the millions. Why would you pay Nicki Minaj that sum of money when that money could be used for something more important. The president had been called out for corrupt practices.

Even considering the kind of music she makes, is it what is actually needed? That is my question. What kind of benefit is her performing in Angola going to have?

What are you currently working on?

There is a myth in Ghana about how we played a football match with India and they beat us 99 goals to 1. Almost any 70s, 80s, 90s child knows this story. It never happened but it has affected how Ghanaians see Indians here in Ghana. The story is so well woven in our history. I find it interesting how a myth like this has come to shape identity. There was a Milo tin, which had a footballer on the label; he was said to be the hero who scored Ghana's goal and died on the pitch.

In the last year, there have been some interesting flashpoints. Ghana received a gift of a statue of Ghandi, which was erected at the University of Ghana campus. There were calls for the statue to be taken down because Ghandi didn't think very highly of blacks. To this day, it hasn't been removed.

What are some challenges you've faced with the work you are doing?

Some of my work hasn't been received positively. For instance, I was invited to participate in an exhibition at the university i just told you about and I had a painting about this Ghandi issue. The work got pulled down; they didn't let me show it.

A lot of my work goes on social media. I find that once in a while people might feel offended because my work is discussing something their favorite politician or church leader did. It's hard for you to make an objective analysis of these things.

The Chinese embassy in Ghana wrote a strongly worded letter about one of my images.

There are positive reactions, as well. In 2016, I received the Kuenyehia Prize for contemporary Ghanaian art and more rigid places began to open up.

Does the backlash that you receive ever worry or scare you?

Yes and no. It depends on who is doing the backlashing. If it's someone I know is in the position to harm me, I think twice. If its social media trolling, I pay it no mind. The scariest, thus far, has been the China one. I know how dependent the Ghanaian government is on the dealings they have with the Chinese. If it appeared that someone was doing something like what I was doing, it meant I didn't just have to fear the Chinese but my own people.

There's so much going on—it seems like the Chinese actually run the nation. The sad part is that it's not in the mass consciousness how deep in we are—what our actual relationships are with them. It looks like they are just here to help us. Behind closed doors deals are signed and money is exchanged at the expense of everyone else.

I think some exchanges are fine but exchanges have to be fair. Chinese locals have shootouts with policemen here. It's like a movie!

Because your work raises eyebrows, do you consider yourself a rebel?

It depends on where I am. In my country, people see me as a rebel or a freedom fighter but I know these things are normal in other spaces.

What do you aim to do with your work?

I want people to become aware of things they won't get in the media. I would like to present a critical viewpoint that is not in the news but I feel is very central to what is going. I want to caution people about the kind of issues I'm exploring in my work and about the art form itself. I want a lot more people to be aware of the fact that anything can be art. Your work doesn't have to be in a particular medium or present a particular kind of subject matter before it is "certified." I want people to take my mediums and stretch them further. I want to have fun. Making my work makes me happy and sharing it makes other people happy.

What are your future plans?

I want to exhibit everywhere an artist can. I have a group show in February in Kumasi and a collaboration with Kenya-based artist Michael Soi in April. Michael also does work centered around political and social commentary and uses satire. It will be interesting to see the same idea from the west and the east.