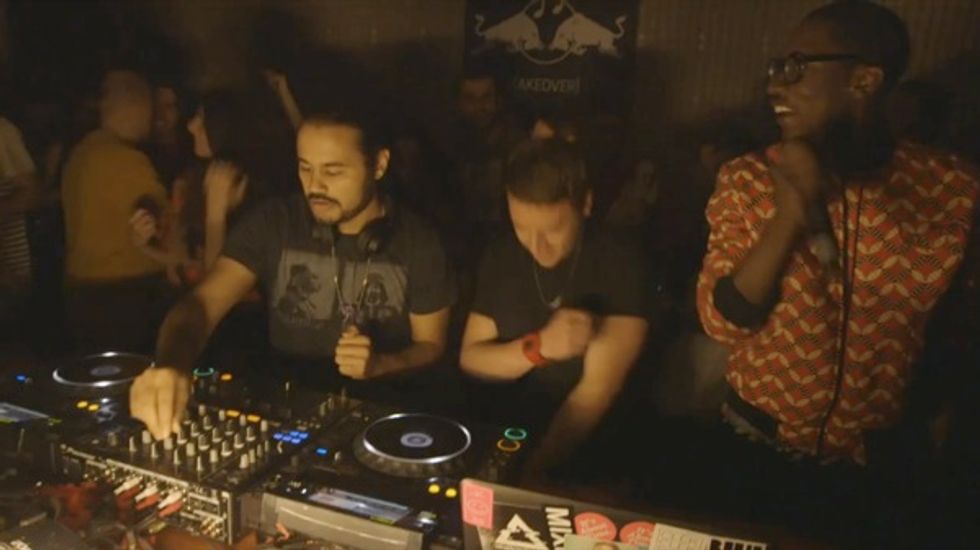 Buraka Som Sistema's recent Boiler Room session, which we posted a few moons ago, sparked some serious intrigue from global bass heads worldwide for its "introduction" of Zouk Bass — a screwed, electronic take on 80s French Antillean zouk music popularized by Kassav. We asked Buraka member Kalaf to breakdown this genre mutation for us.

"We created it," Kalaf responded via e-mail, "while recording Komba we were exploring other rhythms such as Zouk and Kizomba... When we were invited to play at the Boiler Room we had this idea to share more Lisbon sounds (beside kuduro) with the world. Since we like to twist things up we think "Zouk Bass" would be perfect name to label those beats."

On their Enchufada label page, Buraka describe the genetic make-up of the genre in a post titled We Call It Zouk Bass: "By lowering the BPM and taking Zouk’s rhythms and melodies to meet the electronic and bass-heavy sounds of the UK underground a new genre was born."

While BSS can certainly be credited for proliferating this new sub-genre and bringing it to a world stage, the track that inspired it all — and the first tune Buraka dropped on their Boiler Room set — was Deejay Kuimba's "Tarraxo Na Parede." In an interview with Generation Bass, the Setubal (Portugal) based underground DJ/producer described the style of his track: "Zouk Bass for me it’s different than any other style but it is still based on “Tarraxinha” and “Kizomba” but totally different.... The idea is a dance style of music but leaning against the wall while dancing to it as u can imagine listening to that beat."