This Compilation Explores 'The Original Sound of Burkina Faso' 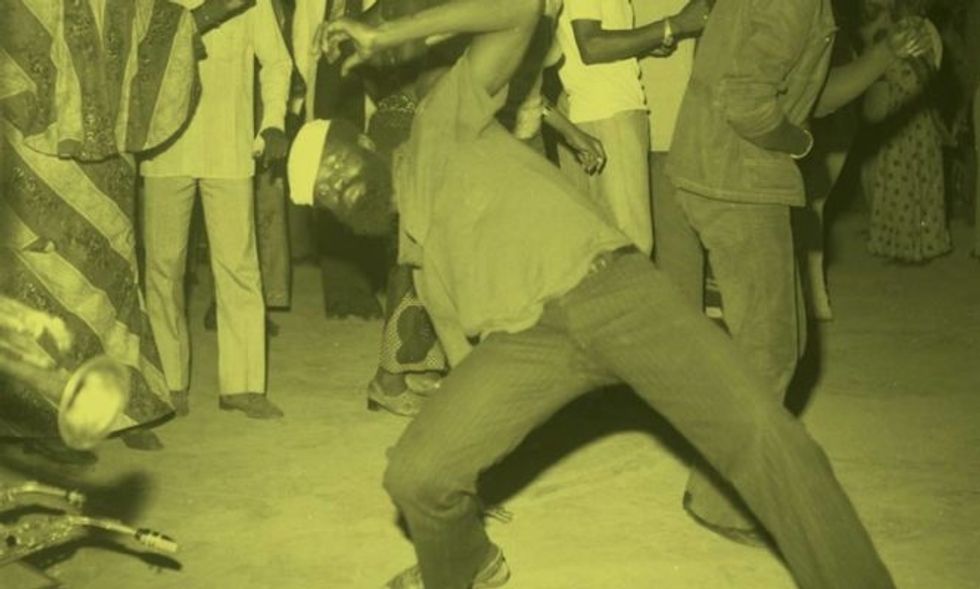 Get to know the wide range of 1970s and 80s Burkinabé music featured in Mr Bongo's new compilation.

The music featured in Mr Bongo's compilation, The Original Sound of Burkina Faso, captures an exciting myriad of rich, unconventionally cosmopolitan sounds popularized in Burkina Faso throughout the 1970s. Named as the "Land of Incorruptible People," Burkina Faso as we know it wasn't formally denominated until 1984, but its unique musical landscape and enthusiastic willingness to embrace foreign influences had rooted itself in the culture long before.

Burkina Faso's makeup of diverse cultures and languages is nearly unmatched, with over 50 distinct ethnic groups represented (including the Touareg and Mossi) and just as many languages spoken. It's a mostly rural nation with nine-tenths of the population working as agriculturalists and farmers–so compared to the kind of cultural exchange that occurred in metropolitan cities, new music trends were disseminated in smaller, less obvious ways.

Large populations regularly migrated south for work, establishing consistent migration patterns that led to continuous movement that spanned several generations. Where written words often failed to connect the disparate ethnic groups of this region, one of the most illiterate countries in the world, music provided a clear, non-confrontational means of communication and collaboration. Despite its economic limitations, music gave this country a means to truly thrive. We spoke with David "Mr Bongo" about The Original Sound of Burkina Faso's complex and consistently surprising range of musical influences.

What span of time does this new compilation highlight?

Where other Burkina Faso compilations have focused on field recordings, traditional drumming, or early versions of highlife and West African proto-funk, the 17 tracks featured on the digital version of The Original Sound of Burkina Faso contain a wide range of distinct musical genres. They mainly come from the 70s to early 80s, but with some of them there was no date.

How would you describe The Original Sound of Burkina Faso in a few short words?

It is a quintessential guide to the hard edge of Burkina Faso music. It is chiefly aimed at the world music music buyer who wants a killer introduction into this lesser known (musically speaking) African country. In a way we're trying to cover funk, folk, African, psych, and disco styles to open people's minds.

What are some of the unifying elements of this compilation?

Burkina Faso excels as a cultural melting pot. What do you believe to be the reason behind Burkina Faso's diverse and globally engaged scene?

I agree about it being a melting pot and it's diversity, but I don't think it is as globally engaged as you imagine. In as far as other countries have not really explored what it has to offer. Even France has a distinct lack of Burkina Faso music in the market compared to other Francophone countries.

Can you tell us a little bit about the research and curation process behind this compilation?

Really when I started research I only knew of Amadou Balake, Tidiani Coulibaly, & Abdoulaye Cisse. These were the key guys I wanted on the compilation. Then Florent Mazzoleni (co-compiler) who has travelled there many times suggested other tracks and I whittled down from around 50 tracks to the final 17 on the compilation.

Were there any artists or individual tracks that you were surprised to discover?

Yes! Bozambo has such a heavy dance style. Pierre Sandwidi, I love some of his stuff, it's very eccentric and out there (even sounds quite cheesy). Mangue Konde was a real eye opener and he has done bucket loads of great albums. You can't get these album unless you travel there, and not many people do.

Are there any one-hit wonders or virtually unknown artists featured on the album?

Yes, John Oumar Nabolle is one. I wanted a disco track to show off Burkina Faso's diversity.

What was the most exciting part of curating this compilation?

Discovering the music and the talent that was in Burkina Faso, and how it had never really been exposed as much as it deserves.

Was there a specific message or idea you hoped to convey when putting it together?

Travel to Burkina Faso, support the culture, and please someone bring these artists to the U.K.

Are there any other Mr. Bongo compilations in the works?