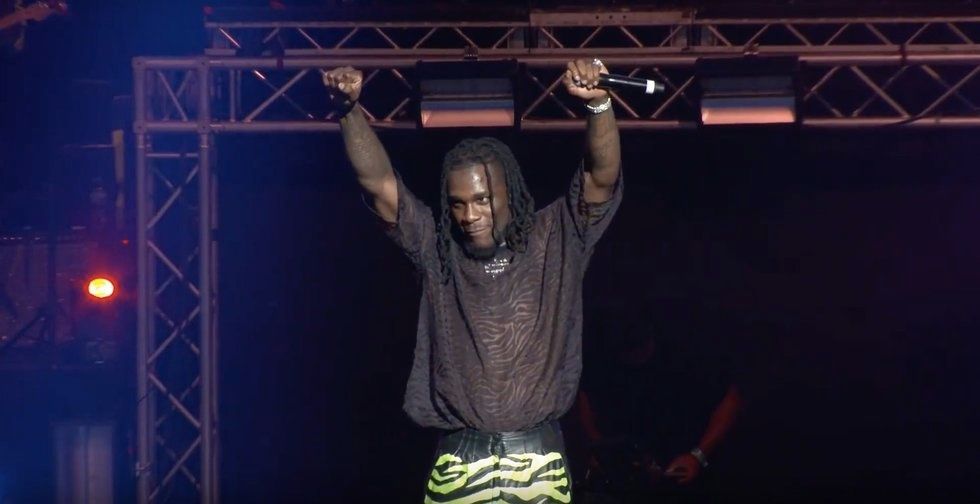 Burna Boy performing at the London 02 arena. Still from Youtube.

The artist is embarking on a multi-city tour beginning in April.

Last month Burna Boy became the talk of Twitter when he referred to himself as an "African Giant" when calling out Coachella for writing his name in "tiny writing" on their official line up for this year's festival. Well the name has stuck, and now the Nigerian "afro-fusion" artist is embarking on his very own African Giant Tour.

Burna Boy took to Twitter earlier to share the first batch of dates set for this coming April. So far, the tour includes stops in several US cities including Boston, Maryland, NYC, Chicago, Colorado and California. These are just the first set of stops on the tour, according to the artist.

READ: Coachella 2019—Why Burna Boy & Mr Eazi Are the Right Artists to Bring Afrobeats to the World

Check out the dates that have been announced so far, via Burna Boy's video announcement below:

Burna Boy embarked on the successful Outside tour last year, which saw him touring internationally and filling up major arenas like London's O2. He also recently announced an upcoming show in Kampala, Uganda slated for next month.

The "African Giant" will be performing at this year's Coachella Music Festival in California on April 14.