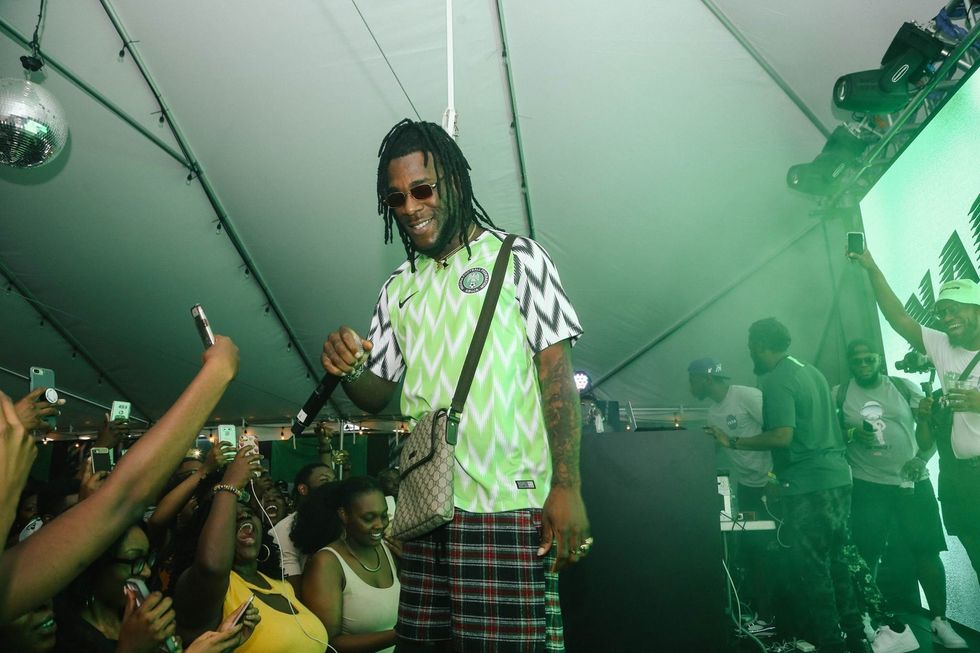 In 2018, Burna Boy was Nigerian music's most undeniable force. But is he the king of Naija music?

The first time I saw Burna Boy's "Like to Party" video I was shook. The artist looks knowingly at the screen as he sings the words "you see my dark shades on like I can't see you, but you no say me fancy you" with a flirtatious smirk on his face. Needless to say—I was into it. The rockstar bravado, the flashy style, the sweet-sounding party anthem—all of it. That was 2012.

By the time he dropped "Soke," in 2015, I was convinced he was "the one." Sure, I'd heard afrobeats songs I liked before then, but none had truly grabbed me like that song, or the man behind it. It was how I thought contemporary Nigerian music ought to sound; inspired by the past but not derivative, and not simply tailor-made for the club either. Burna's unique appeal felt obvious to me then, but in 2018 it became undeniable.

The self-proclaimed afrofusion artist has been the pride of the "in the know" afrobeats crowd for some time—a stunning talent that sometimes went overlooked while the masses argued over who between Davido and Wizkid was king of the Naija pop throne. His sheer talent was acknowledged, but still it seemed his name wasn't brought up enough in conversations about the genre's greatest stars.

But something changed in 2018: Burna proved himself to be the most prolific Nigerian artist on the scene, outperforming most of the genre's "bigger" names with an overflow of quality tunes. It didn't feel as though Burna was trying hard either, instead he appeared comfortably in his element. He simply carried on doing his thing: producing one-of-a-kind, mellifluous bangers with strong replay value. For me, every new release brought about a renewed excitement, another jam with the potential to bringing the artist closer to full afropop stardom.

It began at the top of the year with the release of Outside—a sonic showcase of Burna's musical versatility. On the same album, he delivered his signature dancehall-leaning fusion with tracks like "Rock Your Body" and "Sekkle Down" featuring Gambian-British rapper J Hus, alongside songs like "Koni Baje," a juju-inspired throwback sung in Yoruba. He served textured R&B production on "Giddem" and "Devil in California," collaborated with Lilly Allenon the lyric-heavy "Heaven's Gate," and even shared the Little Yachty-esque schoolhouse trap single "Streets of Africa." Though it was immediately met with rave reviews from fans and connoisseurs, the album took its time to truly set in, gaining more and more hype over time as new listeners discovered its wonder. The album's widespread listenability further established Burna as one of the Nigerian artists most equipped for much-coveted crossover success, proving he could appeal to several palates without compromising the essence of his musical identity.

Of Outside's many gems, the jewel in its crown was the track "Ye." After hearing it for the first time, I hit the replay button immediately. There was simply nothing to dislike about the raw and expressive mid-album cut. The track took on a life of its own, growing into a full blown anthem—the Nigerian National Anthem to be exact.

"Ye" was always a hit, but it received an unexpected boost this summer, when listeners searching for Kanye West's album by the same name accidentally stumbled upon it, reportedly leading to a 200 percent spike in streaming numbers. Those searching for Kanye discovered a new talent—quite frankly more worthy of their time than 2018-era Kanye West—and the rest of us got to relish the rightful exposure of a song that we knew deserved it in the first place. According to testimonials shared on social media, this helped earn the artist a new batch of global fans.

While many of us were still savoring Outside, the artist gave us even more to devour, delivering the smoldering "Gbona" in September, complete with a music video that showcased his fresh fashion sense and unique visual approach. After that, he slowed things down for the love song "On the Low." He was even featured on the sleeper collaboration "Baba Nla" with two of afrobeats founding fathers, D'Banj and 2Baba and managed to be the clear standout on that too.

Perhaps the climax of his eventful year were a series of performances in London during his Outside tour—most notably a packed, headlining show at London's O2 Arena. I watched via livestream as Burna Boy mania ensued. The energy in the venue palpable even through a 13 inch laptop screen. The artist himself appearing wowed as the audience shouted the lyrics he was supposed to be performing back his way. Oluwaburna had announced himself and I felt like an adoring Nigerian aunty watching it all happen. Folks were finally seeing the vision.

Something clicked for Afropop fans in 2018. Burna's increased recognition wasn't mere happenstance, of course. Like any other artist of his caliber, he has a hardworking team behind him, strategically helping elevate his career with every collaboration, appearance and profile in Vogue magazine. But that's not all that was responsible for his stellar year. In 2018 the artist's star qualities: his singular musical skill, undeniable edge, and formidable style shone too brightly to go unnoticed.

Burna enjoyed a standout year by nearly any measure and a better one than most of his counterparts. This year Burna took full command of his space in the growing Nigerian music scene, remaining an uncontested "fave" by simply remaining a more visible version of himself and gaining new fans along the way. While the industry's other frontrunners may have been vying for royal titles, Burna emerged the people's champion—the true contender.

In 2018, it was clear that as Nigerian music continues its journey across the globe, Oluwaburna will remain "the one."