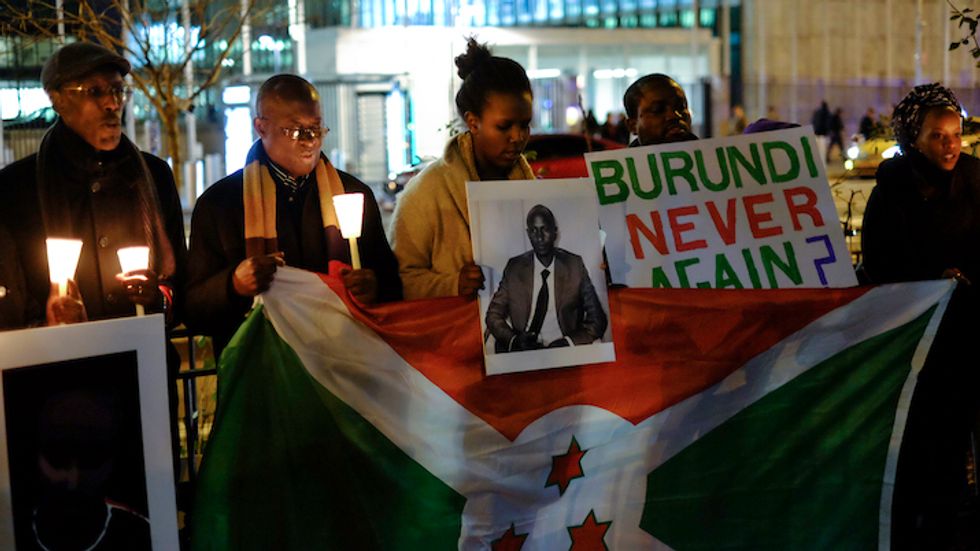 New York's Burundian community and supporters held a candlelight vigil in front of the UN to honor the lives of those killed in Bujumbura.

Last Saturday, New York City’s Burundian community and their supporters held a candlelight vigil in front of the United Nations Headquarters to honor the lives of those killed during recent political violence on the streets of Burundi’s capital Bujumbura. According to human rights groups at least 400 people have been killed since April 26, when it was announced that Burundian president Pierre Nkurunziza would run for a third term. Nearly 3,500 people have been arrested in the political crisis and 220,000 people have fled the country.

Jean Claude Harabagabo left Burundi when he was 11 years old. His cousin, Nimbeshaho George, was one of 87 Burundians killed during the violence of December 11-12. “We want to bring attention to the massacres and ask to the international community to do something to protect the innocent civilian lives that the government of Burundi has not been able to protect” Harabagabo told Okayafrica during the rally.

On Saturday, Burundi's government rejected the African Union's plans to deploy a 5,000 peacekeeping force to stop escalating violence in the country. Currently in Burundi’s capital city of Bujumbura gunfire disrupts the nights and dead bodies are appearing on city streets almost every day. This has led many to warn of a potential genocide.

The African Union Peace and Security Council (PSC) insisted last Thursday that "Africa will not allow another genocide to take place on its soil," announcing that Burundi has "an urgent need for action to stop the killings.” Supporters of the president Nkurunziza dismiss the charge.

"The threat of genocide justifying this deployment is only a plot of government critics," the Burundian National Security Council statement said, read out by Minister of Public Security Alain-Guillaume Bunyoni. The AU Peace and Security Council has said it would send troops even if the government refused to accept it. African Union peacekeeping forces would have an initial renewable mandate of six

For eight month now Burundians in the diaspora have been trying to get the attention of the international community warning of the potential massacres like the one last week. “We can’t trust the Burundian government to do the things they need to do to protect the civilians and also to put an end on the violence and the mass killings,” said Harabagabo.

David Druce, a New York public school teacher with ties to Burundi came to the vigil out of concern for the violence. “I teach in New York public school system where it’s mandatory to learn about Rwandan genocide,” Druce told Okayafrica. “The American government’s embarrassing silence then led to the deaths of thousands of innocent people. I am here to support my friends and to push the United Nations and American leaders to act on this”

The United Nations Security Council, in a statement Saturday, expressed "deep concern about the escalation of violence in Burundi," condemning both the attack on the military installations and the retaliatory rampage in Bujumbura. The council urged all sides in Burundi to support Ugandan President Yoweri Museveni's mediation effort and to cooperate with the African Union's plan to deploy a peacekeeping force.

Nkurunziza's third term was opposed by many Burundians who say it violates the country's constitution two-term limit. Nkurunziza argues that his first term in office does not count because he was elected by parliament and not by the people.