One Year Later: Burundians Continue To Protest For Intervention At The UN 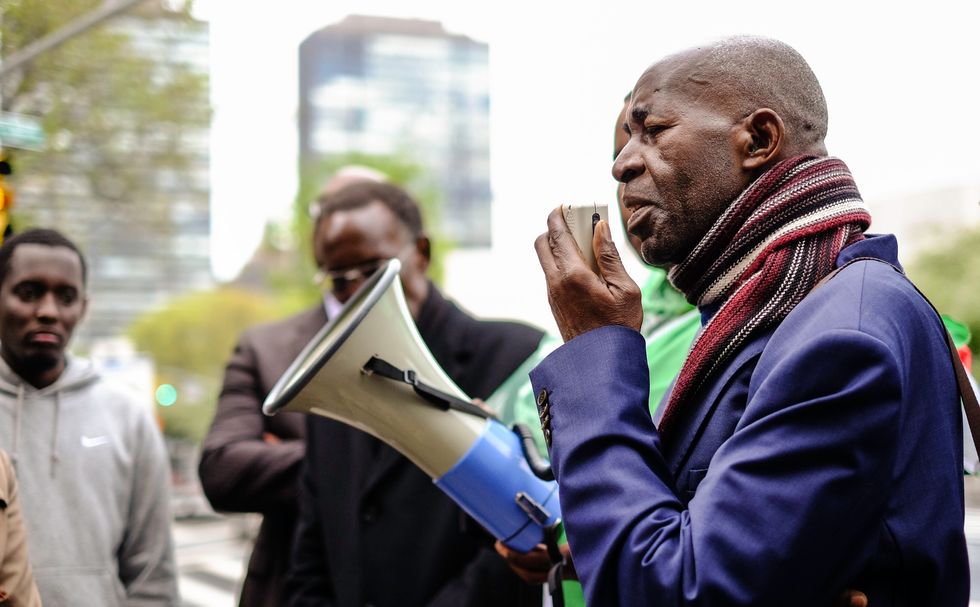 Burundians gathered at the UN headquarters recently to demand action against the violence incited by Pierre Nkurunziza's regime.

A year ago, Burundi's president announced he was running for a third term, which triggered a failed coup, protests and a violent crackdown. Hundreds died and at least 250,000 have left the country in exile.

Pierre Claver Mbonimpa, the Burundian human rights activist who was injured in gun attack and lost his son and son-in-law during the conflict, joined Burundian communities living in Canada and the U.S. at the United Nations headquarters to demonstrate and commemorate one year since the atrocities started.

“I came here to meet UN Secretary General and the members of UN Security Council to let them know what’s happening in our country from the people’s perspective. The government is behind systematic killing of its own people and intimidate them so that they can’t express themselves. Even if we are now in exile my human right organization APRODH is still there [at] the grassroots level and we have all the data about the genocide going on,” Mbonimpa tells Okayafrica. “Seeing the Burundians living abroad united against evil, gives us strength and more determination, and we hope that the talks with the government that we have been invited for will bring back peace in Burundi.”

Last Tuesday, while remembering the first anniversary of the massacres that started in Burundi when CNDD-FDD announced Pierre Nkurunziza as their candidate running for the third term, hundreds of Burundians living in Canada and the United States met at the United Nations for a peaceful protest to remind the UN its duty to protect the people in case their own government fails to protect its people.

“We are here to remember our lost ones, to remind everybody that the families of the victims need justice, and to remind the United Nations that it is one of their most important obligations to protect the Burundians that our government failed to protect," John Manirakiza, the delegate of Burundians living in Washington D.C., says. "This is the toughest moments for us Burundians—we need to stay united to face this regime that's against our democracy and freedom.”

Mbonimpa hopes that it is a good sign towards peace in Burundi and that today, both the international community and the East African community are starting to understand both sides in Burundi in order to find a sustainable peaceful solution.

However, Burundi's government spokesperson, Willy Nyamitwe, told both BBC Africa and Voice of America on the radio that the government of Burundi doesn’t understand why the former president of Tanzania, Benjamin Mkapa, who's been appointed to facilitate the peace talks, would invite the opposition before inviting the representatives of Burundi.

According to Andre Dunduri of the Burundian-Canadian Alliance, “One year of violence is too much," he says. "So many Burundians are desperate—neither the neighboring countries nor the international community can’t help us to find the solution while us, the Burundians, don’t stand together. Let’s stay united and fight the evil that’s destroying our unity, so we can stop this systematic genocide that’s happening in our country.”

The UNHCR reports that neighboring countries are still receiving the refugees, and that most of the refugees are claiming that they have been threatened, tortured, imprisoned, or raped. If nothing is done in immediate to restore the peace in Burundi, the UNHCR expects that before the end of 2016, they will attend to more that 330,000 Burundians who will flee the violence, which would then cost them $175 million this year.