Burundi: The United States Is Cozying Up To Nkurunziza Even As They Condemn Him 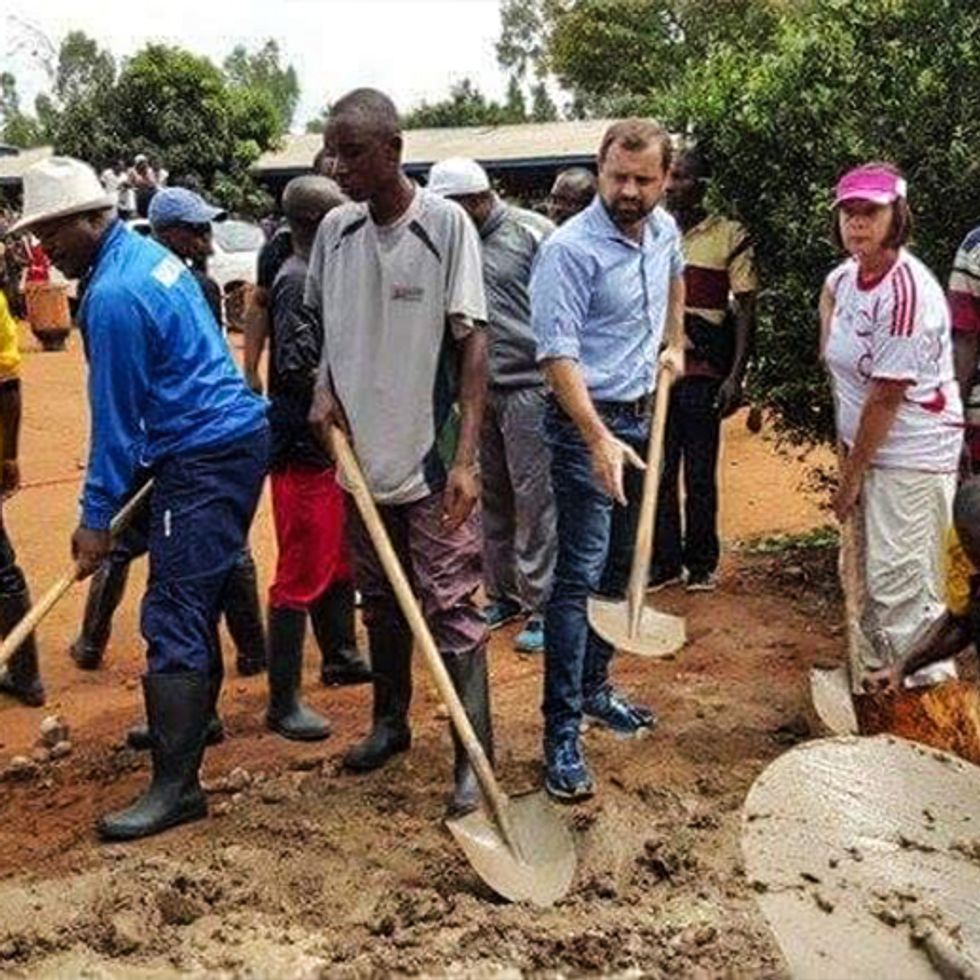 Tom Perriello volunteers during his trip to Burundi in Cibitoke. Source: Twitter

When asked what he is doing to address the looming electoral crisis in the Democratic Republic of Congo (DRC), Tom Perriello, the U.S. Special Representative for the Great Lakes, likes to say that “Burundi is a cautionary tale.”

When U.S. Senator Ed Markeywants to be reassured that DRC President Joseph Kabila understands how hard the United States will come down on him if he violates the constitution and extends his rule, Tom Perriello and the State Department point again to Burundi.

Perriello has repeated that line so many times that it’s begun to sound believable. That was, until, last weekend.

On Saturday, February 20, Perriello and the U.S. Ambassador to Burundi joined Pierre Nkurunziza’s campaign-styled community works in the western province of Cibitoke. They celebrated with and high-fived Nkurunziza followers. It was a perfect photo-op. Pro-Nkurunziza communicators celebrated the symbol of a new Nkurunziza-United States rapprochement. Finally, their conjured up, longtime archenemy Ambassador Samantha Power (President Obama’s cabinet member who has criticized opposition crackdown in Burundi since early 2014) was isolated, vanquished. Hail Peter!

A little over two weeks prior, Perriello and the U.S. State Department had described to the U.S. Senate’s Foreign Relations Committee how Nkurunziza’s forces stood credibly accused of rape and mass executions in opposition neighborhoods. Perriello told U.S. Senators how recent attacks on government installations were “followed by a prolonged crackdown by government forces, which included pulling individuals out of houses and killing them in the street.” At the same hearing, Assistant Secretary of State for African Affairs Linda Thomas-Greenfieldprovided greater details on recent mass atrocities committed by Nkurunziza’s forces, stating that:

“Multiple credible reports indicate security forces searched homes, stole money from residents, and dragged away young male residents of the Nyakabiga neighborhood, some of whom have not been seen again. […] The United Nations High Commissioner for Human Rights, the African Commission on Human and Peoples’ Rights, and several Non-Governmental Organizations including Amnesty International and Human Rights Watch have reported recently on unprecedented human rights violations and abuses taking place in Burundi. These include witness reports of the presence of mass graves, a sharp increase in alleged enforced disappearances and torture, and reports of sexual violence perpetrated by security forces.”

Both diplomats repeated the U.S. State Department’s assessment that the crisis in Burundi resulted from Nkurunziza’s decision to seek a controversial third term in April 2015. Since then, his forces are busy repressing dissenting voices in blood. The 10-month crisis has allowed Nkurunziza to consolidate his power under the watch of a well-informed, ever-condemning, but clearly powerless international community.

Time for appeasement? If Perriello can vividly describe the violence Nkurunziza’s opposition suffers in the hands of government forces, and then nearly bear-hugs him a few weeks later in rural Burundi (with ongoing violence); how would Kabila see that as a cautionary tale? A picture is worth a thousand words, they say. If what the world witnessed in Cibitoke tells us anything about how hard the United States will come down on Kabila as Senator Ed Markey inquired, the Congolese leader has nothing to worry about.

Nkurunziza’s brutal and bloody repression and the international community’s incapacity to contain him in small Burundi can only be a playbook for dictators who want to stay in power by closing political space and crushing dissenting democratic voices. Activists in Kinshasa need know that. They must keep Perriello’s “cautionary tale” hype in check and plan accordingly. Those still resisting in Burundi must also take note. There is no help on the way from the international community. The struggle is yours to fight. Not theirs.