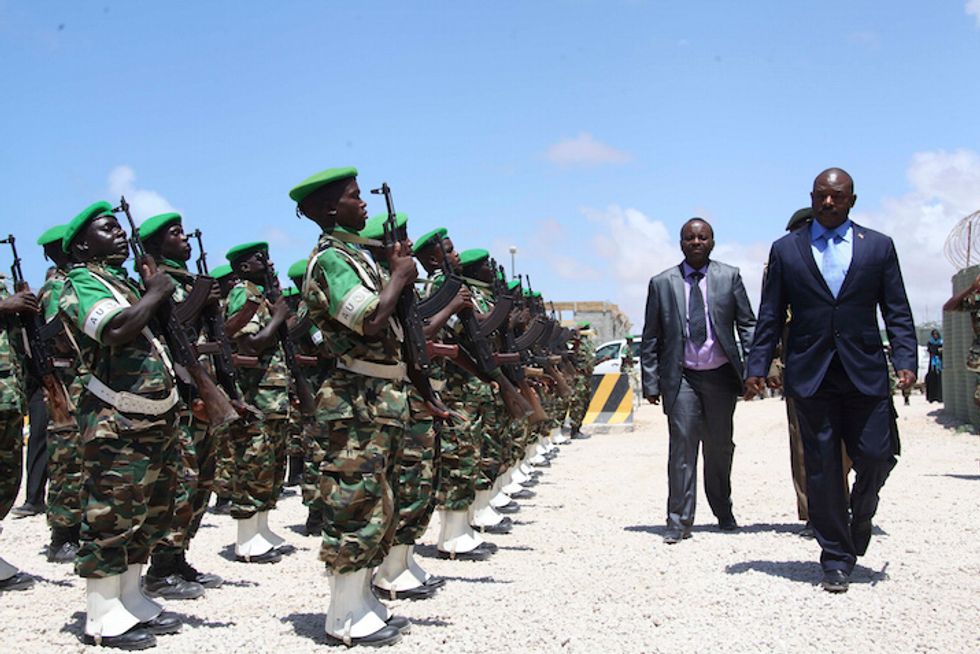 Burundian social media has taken on a far more utilitarian role since the coup in April 2015.

Karl-Chris Nsabiyumva, 28, might be the center of Burundi’s modest Twitter-verse. “When I joined Twitter in 2011 there weren’t that many Burundians on it,” Nsabiyumva tells Okayafrica. By choosing the handle @Mr_Burundi, Nsabiyumva’s account became something like the central node of a growing network of Burundians online. “The voice of Burundi on Twitter,” he says with resignation in his voice.

In April, Burundi’s president Pierre Nkurunziza declared that he would be running for a third term, an act the opposition derided as unconstitutional. This led to weeks of widespread demonstrations against the president centered in the capital of Bujumbura. While Nkurunziza was out of the country for talks aimed at resolving the crisis, Major General Godefroid Niyombareattempted a coup d'etat. By the next day, the coup was reversed and Nkurunziza was vowing vengeance on both the plotters and the protestors.

Since the coup, a wave of assassinations and disappearances has plagued Burundi, forcing the country’s leading voices of dissent to flee or go underground. In its place has arisen a vibrant underground media dedicated to anonymously chronicling the violence online. Most recently, at least a dozen civilians were killed in clashes over the weekend in Bujumbura, prompting greater scrutiny from international human rights groups and heightening regional tensions.

Burundian Twitter is like any online community, tweeting observations, jokes and barbs at each other in a mixture of French, English and Kirundi, but in recent months, Burundian social media has taken on a far more utilitarian role: coordinating, updating and broadcasting news out of a country that is in the midst of an information lockdown.

Well-known for his blogging, Nsabiyumva is, by his own admission, not a natural rabble-rouser. Before the political turmoil, his day job was running a Burundian community-health NGO that worked with youth and women teaching sexual reproductive health. As the protests against Nkurunziza intensified in April, he joined friends arranging food and drink for injured or incarcerated protesters. One of his roles was linking donors in the Burundian diaspora with people on the ground; funding a shelter for children in the neighborhoods hit hardest by conflict.

But Nsabiyumva’s online organizing put him in a politically precarious position. He started to receive threatening phone calls, and as Burundi fell further into political chaos, Nsabiyumva slipped over the border to Rwanda before coming to the United States.

“I wouldn’t have left, but the problem is you don’t know where the danger comes from,” says Nsabiyumva. “There are many people who are for the president but not controlled by authorities. There are groups within police, youth militia, army who do whatever they want.” As someone who had recently appeared on international television debating government officials, Nsabiyumva believed he could be targeted by any number of groups, including factions from within the protestors themselves. “It’s like a little Somalia right now,” he says.

To stay abreast of the situation in Burundi from his current location in Oklahoma, Nsabiyumva monitors Whatsaap, Twitter and Facebook obsessively for breaking news. Nsabiyumva and others agree the best source for news on the ground is the Soundcloud account SOS Médias BURUNDI. Made up of independent journalists in Burundi now too frightened to work openly, the group post radio clips to Soundcloud, distributing them via Tweets and Facebook posts.

A vibrant online community congregates around this news, analyzing and poking at it in real time. In August, the satirical hashtag #10millionpresidents became its popular rallying cry. The hashtag is a satirical take on Nkurunziza’s rushed third term inauguration, proclaiming each and every Burundian a president with many participants posting their presidential platforms and images of themselves taking the oath of office.

Today's housework was entertaining since I woke up as Mrs president!Holla at your excellency ;-) #10MillionPresidentspic.twitter.com/FuwUEjQHAY

His excellency thanks all international & national Medias for congratulating him ! #10MillionPresidentspic.twitter.com/Undr6fdyxv — Martial Irutingabo (@Marseeyall2) August 27, 2015

The #10millionpresidents meme was started by Diego Ndikumasabo, a 32-year-old who left Burundi after the Arusha Accords in 2000. Now living in Toronto, Ndikumasabo wanted to inject some humor into a potentially bleak situation. But the web, according to Ndikumasabo, is not only the domain of the protestor. Pro government accounts, whether openly members of the ruling party youth wing or secretive “egg” accounts, are actively harassing people who tweet against the government. Ndikumasabo has been sent messages saying “We are going to trap you if you come back home” or “We are going to send someone to kill you.” But while he feels safe from reprisals as a Canadian resident, Ndikumasabo communicates to his friends and family in Burundi largely through Whatsaap, which, unlike Twitter or Facebook, has a layer of privacy to it.

The humor and democratic undertones of #10millionpresidents resonated with the members of the decentralized international hacker group Anonymous, who have been regularly tweeting in support of the movement at @YourAnonCentral. It’s reminiscent of the viral jokes coming out of the Burkinabe revolution last year.

But while #10millionpresidents continues to satirize what many Burundians see as anti-democratic moves by the president, it’s ultimately a very serious situation. According to Nsabiyumva, the crackdown and the attempts by Nkurunziza to bring ethnicity into the conflict could undo the incredible unity between Hutus and Tutsis that, according to many Burundians, came to define the protests. For the first time in Burundian history, says Nsabiyumva, the protests have focussed on a corrupt political class of both Hutus and Tutsis. “More than a decade of power sharing,” says Nsabiyumva, “makes us realize that politicians lied to us. We’re not poor because this minority is not sharing power. There’s something else behind it.”

Aaron is a freelance journalist based in New York covering cities, culture and African politics. Follow him on Twitter at @aaronleaf.