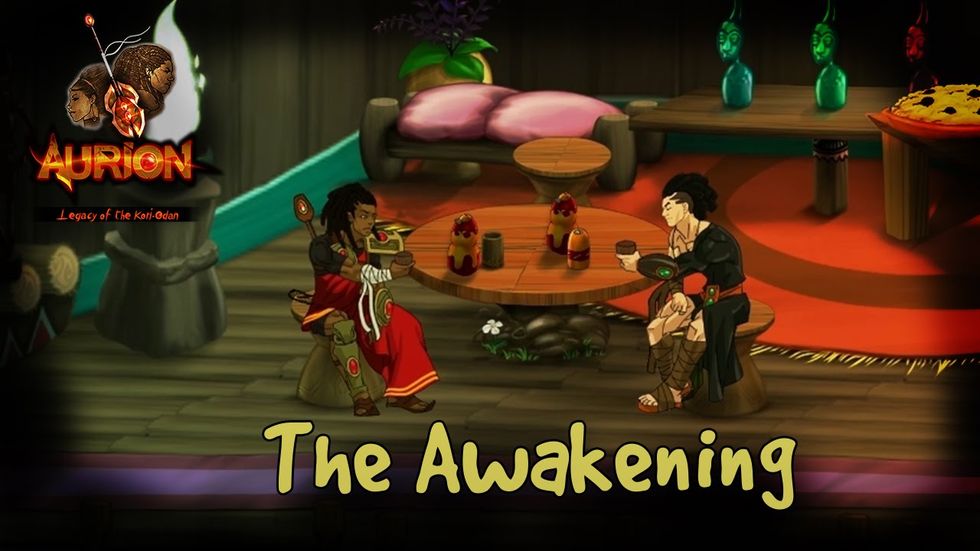 One of Africa’s first role-playing games Aurion: Legacy of the Kori-Odan is here. In fact, it’s been available for for download on the American platform STEAM since April 14. However, many gamers—especially African and Black American ones who disproportionately log longer gaming times, but lack representation onscreen and off—don't even know the fantasy video game is out yet. This speaks to the distribution challenge that developers of African and African descent, who make up only three percent of a ever-growing $101 billion video gaming industry (Pokémon Go, anyone?), have in reaching their target consumer market, while simultaneously internationalizing their product to appeal to a mass audience.

Despite these obstacles, Guillaume Olivier Madiba and his team of 18 artists and designers who make up Kiro’o Games, a video game studio nestled in the foothills of Cameroon’s capital Yaoundé, have spent at least ten-thousand hours developing Aurion over an arduous period of more than two-years. It's their first studio video game developed wholly from scratch, including their own engine, which Madiba says "no one can do except big studios." Along with learning many techniques from the ground up, they produced the soundtrack, intermixing African percussive music with orchestral themes.

Having endured scheduled rolling blackouts, which necessitated shifting schedules and pulling twelve hour shifts to compensate for lost productivity, Aurion is a true labor of love and quite a feat as game production times usually take three to four years. "The pressure was really high. People didn't get a great salary of a normal studio and that was a really big part," Madiba explains. "I think that is also our greatest success because we kept 80 percent of the core team, without a lot of turnover."

Though truly it's the brainchild of Madiba and two of his childhood friends Dominque and Hugues, who you can classify as blerds (black nerds)—inspired by Nintendo giant Shigeru Miyamoto and popular game titles like Final Fantasy 7 and Metal Gear Solid—that has been incubating for ten years, evolving in depth and focus as they have matured.

Players will become engrossed in the game's narration, which centers on main character and African prince, Enzo Kori-Odan, and his fiancée, Erine who become victims of a coup d'etat by Kori-Odan’s brother-in-law on their wedding and coronation day. Game play revolves around the royal couple's journey to reclaim their rightful throne, and touches on deep themes such as spirituality, Africa's quest for independence and feminism. And it has elements of Afrofuturism—a cultural aesthetic that combines Afrocentrism, science fiction and fantasy—woven throughout.

I caught up with Madiba, whose video game earned him the opportunity to participate in the prestigious 2016 Mandela Washington Fellowship program for young, innovative African leaders, over Skype while he took a break from training at his game studio Kiro’o Games in Cameroon, and at one point our call dropped. I couldn’t tell whether it was his computer or mine.

Let's see what he has to say about Aurion: Legacy of the Kori-Odan. This interview has been edited and condensed.

Erin C.J. Robertson for Okayafrica: What does Kiro'o mean?

Guillaume Olivier Madiba: The idea was to create a spiritual name, a spiritual vision game and we found that in Swahili 'spiritual vision' is translated as 'Kiroho Maonno.' So we made a contraction like Kiro'o Games. We make games for the spirit of gamers.

What's the concept of Aurion?

I can say Aurion is symbolic story of Africa. We mainly focus on a fantasy image, but it's a real deep reflection about the stakes as Africans in the world, and our relation with our past, too, because Aurion is mainly focused on our relationship with the ancestors. We have this highest connection with our roots. The fact that we don't really want to lose who we are, but we have to consider that we are in a world that will not want us and that there is a lot of stakes around us. We are the continent of a lot of resources, but we have to be careful about how we [share] it with others, and how we protect things for the next generations. How we can find our place in the conflict of interest, between the great powers in the world? That's the kind of thing we are about in Aurion.

[Also], the game focused a lot on the main existential questions of life, 'Why are we here after all? What is the goal of humanity?'

How does Aurion serve as a bridge between the gaming industry and Africa?

The story of Aurion focused on the inner [spirit], but those who play the game can read between the lines. It's a conflict analogy to the general African history about the quest of independence, the new colonization, but not as a victim point of view—that the problem is always the fault of others. No, it's a conflict that's a reflection of our generation about what is our place in the world? What can we offer to the world when we see the global stakes?

Africa is the center of the world, so we are in between the political, the economic, the material fights in the world. How can we be the convergence, center of all the interest? Maybe invent the next step for humanity. That's what the game is talking about most, even if it's on another planet, in another world.

Also, I should say that we give a lot of status to women. Even if the main character is a man, people who play the game are surprised that the most of the characters are women. The most powerful being in the world is a woman. We didn't want to make another game where you had to save the girl. We wanted to give this African image of the woman not behind, but at the side of the king, and in the game they are a real couple relationship. That's something we've not seen most games, the mature view of the couple.

How are African traditions and spirituality incorporated into Aurion's narration?

For the traditions if you travel in the cities of Aurion, you will see a lot of traditional African houses. If you see the decoration of the house, you will notice a lot of African huts, statues, and paintings in the houses of the game.

For the narrative part, we have some side-quests in the game purely based on African problems. For example, you have a part of the game where someone is dead, and he has his legal wife and he has another wife, because his legal wife could not give him children. The two wives don't like each other and they decide that they prepared to lose everything rather than share with the other one. This is the kind of dilemma you often have in  the African family—when someone has a lot of women. We also show the bad side because it's not good for a family when you leave someone in this kind of situation, but this is the kind of drama we use in our game.

Do you have a time frame for when you hope to emerge as a leader in the gaming industry?

I think in three to five years, we can really explode. In 10 years, I really want to put in place the the total supply chain of the gaming industry: How to train people, how to help the studio find more investment quickly, and how to make African games go abroad in other markets.

What advice do you have for other African creators who have a vision for video game that they want to put out?

I think one of the great piece of advice I will give them is to be ambitious beyond their limit. If you want to make video games, you have to be crazy. I realized that I was not crazy enough, in fact, I was too humble. I was too realistic, even at this point.

You have to be crazy enough in Africa to bring attention on you, and you will find a crazy investor who wants the crazy entrepreneur. They also have to know that there are people in Japan and America who have been doing their work for like 20 years, and they have to catch up. They have to know that they will work like 10 times more than others to get to the same level and to be noticed. Africa is for hard core players only. If you can do something in Africa, you can do it everywhere. If you put Steve Jobs in Africa, he would never make it.