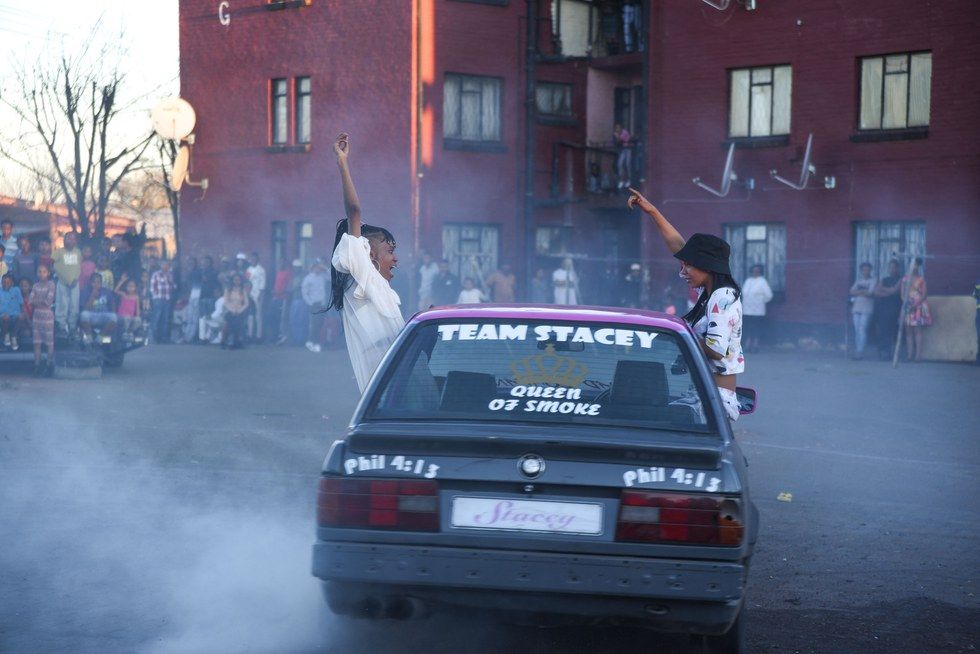 A day in the life of South Africa's 'Queen of Smoke,' Stacey-Lee May.

We stand in the line at the Swazi-South African border, and talk smack to pass the time—so loud that folks at the back of the line are laughing at the stupid shit we’re saying. It’s midday, it’s hot as hell, and we’re all gatvol of hearing the sounds of diehard bikers revving their engines throughout the night, just for nje. I’m with the car spinners. Not the bikers. Apparently you can’t be into both.

We get to the front of the line. The immigration officer stamps my passport and proceeds to flag Stacey, my companion.

The officer double-checks the passport sitting in front of her, “Oh. But you look so cute and small!”

Stacey has been getting called “cute” and “little” and “sweet” and “baby-faced” the whole weekend at the Swazi Bike Rally—and folks can’t seem to believe that she spins cars as fearlessly as she does.

Representing Eldorado Park, Stacey-Lee May has only been spinning cars for two years, but she has already become a crowd favourite. She’s the only female spinner of her caliber in Gauteng, and one of just three women who spin regularly on the national circuit. Apart from her ability to flip her pink and grey BMW 325 gusheshe, Stacey’s talent is in her stunts. She throws a “doughnut,” hops out the car whilst the car is still spinning, hops back in, sits on the edge of her window, and hangs out her car upside down, her straightened ponytail just barely scraping a pitch engulfed in smoke.

With the ever-tightening apartheid regime in South Africa, the 1980s gave rise to heightened social dislocation and a thriving gangster culture in Johannesburg’s outer-laying areas such as Soweto, where spinning was born. Here, it became ritual for gangsters to steal a car and spin it at funerals in honour of those members who had passed. During the 90s, kids took spinning to the street, and developed the scene outside of the criminal world, experimenting with drifting, stunts and drag racing. Today, spinning has been decriminalized and has developed into an extreme sport part of a profitable industry, with a growing network of promoters, spinners, and supporters.

On weekdays, Stacey is a law and finance student. On weekends, she travels across southern Africa with her entire family to spin at shows. Her mother, Lizel, is the momager, and her father, Lester, tows the spin car on the back of his Fortuner. Stacey usually rolls with her sister and their boyfriends in a separate car, whilst her little brother rides with mom and dad. On any given round, it’s either Stacey’s younger sister, Jamie, or her younger brother, Adam, who act as her co-pilot. And if you’re lucky, you’ll catch Adam taking the gusheshe for a spin on the pitch, even though he’s just twelve, and his head barely makes it past the dashboard. This is Team Stacey.

When people hear that I’ve been spending time at spin shows, they often ask, “But what’s the point? Is there a winner?”. The short answer is “No, it’s just entertainment.” But the competitive element of spinning is nuanced.

A big part of the spin game is the mechanics of the car—how does it sound, and what kinds of conversions have been done? Whilst it’s become a trend for some cats to throw v8 engines into old gusheshes, Stacey and her mechanic insist on using a 325 engine to keep that authentic explosive BMW sound.

Spinners spin to be “the best,” and the game is laden with machismo, but there are no clear-cut criteria on what constitutes the best. Some are best at drifting, some are best at doing ‘crazy flips,’ and like Stacey, some are best at doing stunts. A spinner only knows that they’re the best by gauging the reaction of the crowds clinging to the edge of the pitch, hungry for smoke, the smell of burned rubber and the sound of tyres popping.

Watch Stacey in the music video for Branko’s “Let Me Go” featuring Nonku Phiri and Mr. Carmack. Keep up with Team Stacey May on Facebook.

Zara Julius is a social researcher and visual storyteller with a background in anthropology and photography.