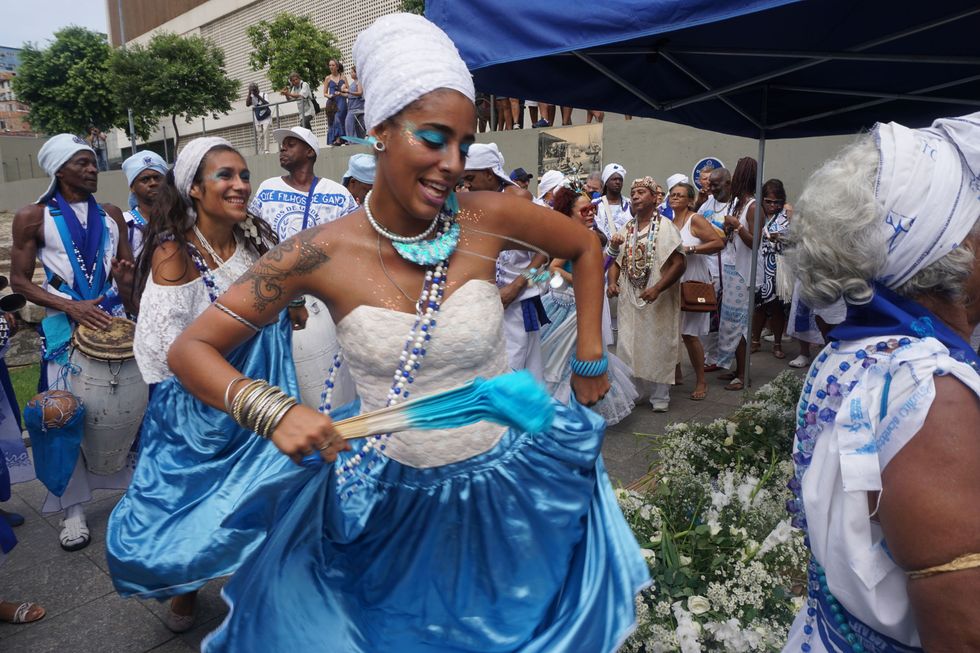 These activists are fighting for the support of the Brazilian government to back a museum dedicated to Afro-Brazilian culture and history.

On a recent Saturday in Rio de Janeiro, the Filhos de Ghandi afoxé group congregated at the Cais do Valongo (Valongo Wharf) to celebrate the naming of the area as a UNESCO World Heritage center. Clad in blue and white robes, the group’s members danced to African drum rhythms. Many of the dances were dedicated to specific orixá gods. The public, many of whom learned about the event through a public Facebook event, watched or joined in on the celebration.

One hundred years ago, such public celebration so strongly connected to the Candomblé religion would have been prohibited. The public expression of Afro-Brazilian culture and religion was often so suppressed that African religion devotees celebrated inside their homes or in the woods.

These days, Rio de Janeiro is undergoing a transformation similar to what Afro-Brazilians are personally experiencing: the city is starting to publicly embrace and promote its African heritage through Afro-Heritage tourism trails. If one man’s dreams come true, then within the next decade, visitors from all over the world will be flocking to Rio de Janeiro to visit CASA África-Brasil—an expansive museum dedicated to African and Afro-Brazilian culture and history.

“It would be a space of triumph and not just a memorial to slavery,” says Carlos Vainer, who presented the idea for the museum at a public hearing about the future of Rio de Janeiro’s port zone. “It would be a museum of the past, the present and the future."

At the end of 2015, the city of Rio de Janeiro took its biggest step ever toward affirming its blackness and embracing its relationship with Africa—it applied for UNESCO World Heritage Status of the Cais do Valongo. The unassuming Cais do Valongo archaeological site sits right outside of Rio de Janeiro’s downtown. Between 1811 and 1831 it functioned as a port; more than 1 million enslaved Africans arrived here on slave ships originating from present-day countries of Nigeria, Benin, Ghana, Sierra Leone, Angola, Mozambique and Madagascar. More enslaved Africans landed at this Rio de Janeiro port than anywhere else in the Americas. During this time period, the economy of imperial Brazil depended solely on the wealth generated through slavery.

“Cais do Valongo is an example of a sensitive historical site that awakens the memory of traumatic and painful events,” says UNESCO in a statement released last July. "Therefore, the wharf of Valongo materializes memories of the pain and survival in the history of Afro-Brazilians, who now total more than half of the Brazilian population."

Now that the wharf's UNESCO status is official, community members, political leaders and academics are debating how to properly honor this painful history. A memorial has already been designed for the site, but locals want something bigger. Academics want to build a museum of the Cais do Valongo. A local political leader wants to build a museum of Slavery and Liberdade. Carlos Vainer, a professor of urban planning at the Federal University of Rio de Janeiro is proposing that the city and Brazilian government build a CASA ÁFRICA-BRASIL to honor Brazil’s relationship with Africa and the descendants of those who were trafficked into slavery.

Vainer is proposing a multi-purpose institution that includes a museum, cultural center, research center, school and a broadcast center. The centerpiece of CASA ÁFRICA-BRASIL would be a museum covering the history of Africa, the African diaspora, and of Afro-Brazilians. He's hoping that some of the permanent exhibitions would include the religions of Africa and Brazil, a genealogy of Afro-Brazilian families, the relationship between Brazil and Africa today and history of the fight against racism in Brazil and across the world. Out of the seven national museums in Brazil, none of them address Brazil’s African heritage. At least five Afro-Brazilian museums are scattered throughout Brazil, with the largest being the state supported Afro-Brazilian museum in São Paulo.

This institution would also be a tribute to the “Pequena Africa” community that emerged near the wharf at the end of the 19th century. Back then black families lived together in communal houses that populated the area, and these became gathering places for religious celebrations that honored African gods. These houses were often led by “Tias” (Aunties), who sold sweets during the day in the streets of Rio de Janeiro and at night presided over the religious celebrations as “Mães de Santo” (mothers of the spirit). The celebrations, accompanied by African drumming, led to the creation of samba music by pioneers Pixinguinha, Donga, João da Baiana, and Heitor dos Prazeres. All of them lived or frequented celebrations around the port area. Today the historical area is represented by the Quilombo de Pedra de Sal, an organization that preserves the memory and history of this area as an African and Afro-Brazilian community.

While Vainer hopes that such a center will be supported by the national government, he has no plans to mount a large campaign to garner the support of the community and government. In recent months he has presented his presentation to community organizations and locals, but he says it's simple.

“This was my contribution to the black movement, but I don’t plan to be a leader of a museum,” Vainer says. “Rio de Janeiro has an obligation to have a CASA África-Brasil that talks to everyone in the world."