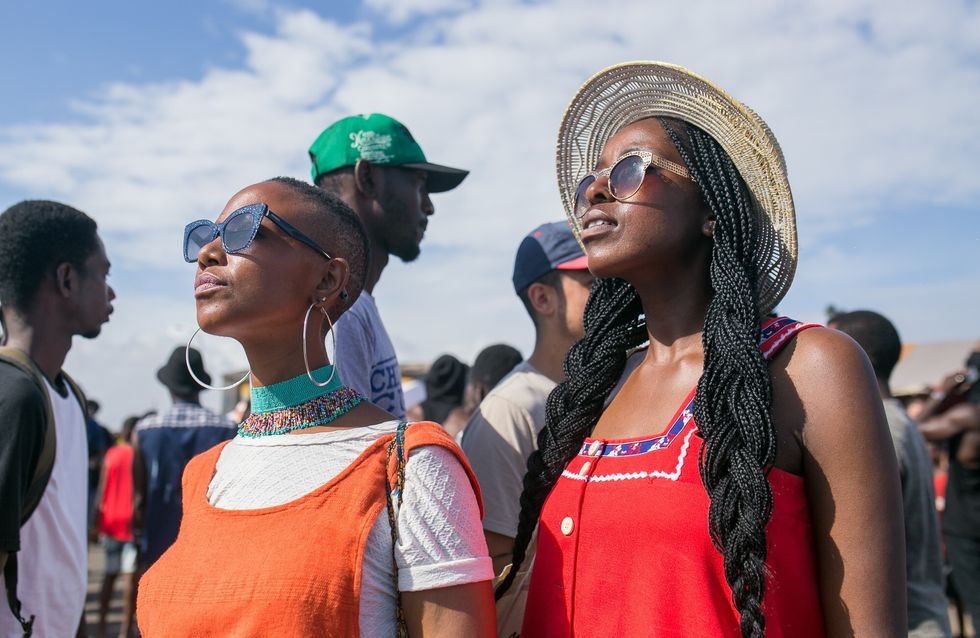 An in-depth look into how CHALE WOTE Street Art Festival is proof of the power of independent cultural programming.

ACCRA [dot] ALT, producers of the CHALE WOTE Street Art Festival have managed to turn Accra in August into the Mecca of street art culture, after eight successful editions of one of the biggest and most captivating art events anywhere in the world.

The week-long festival, which has been in a constant state of progressive evolution, has grown from a passion project creating accessible and impactful art and dialogue around social, political and economic issues, to an entire subculture representative of unrestrained self-expression and limitless creative power. CHALE WOTE has become accessible to everyone who may or may not understand the strength of independent culture programming.

The festival brings together different fields of expression from performance, to fashion, to video art through artists of different dispositions and cultural backgrounds hailing from all over the world. These artists create work in response to a theme that's presented in an entirely open environment with the same fervent and militant spirit of street art, which inspired the whole movement. This year's theme, PARA OTHER, presented an urgent need for "evolution beyond the dialectic of belonging and non-belonging"; requesting for the rediscovery and invention of new codes, symbols, sounds and fractal as a basis for reimagining meta-realities.

In response, over 125 Ghana-based and international artists from the spheres of street art, performances, music, photography, literature and extreme sports used their creative energy to harness the abounding power at the festival in producing work deeply rooted in the living history of James Town and Accra, whilst being reflective of diverse cultures and dispositions.

Being an independent community based event, the work was spread across Brazil House, the James Fort and Ussher Fort prisons, all in James Town, as well as 11 other exhibitions sites across the city of Accra.

CHALE WOTE kicked off on Monday, August 20, with the introduction of the SHIKA SHIKA Art Fair at the Brazil House. A psychedelic mix of new and old work by 11 Ghana-based and international artists was displayed in a curated exhibition occupying both floors of the historical home of the Tabom (a group of self-liberated slaves who moved from Brazil to resettle in Ghana). The fair was an avenue to expose the range of expression possible through street art by highlighting unique styles, motifs and characters from the use of lucid color, psychedelic text and multiple landscapes available through the medium.

From the gory and vivid portrait of seasoned Ghanaian street artist, Kwame Akoto "Almighty God," who uses religious treatments to make social commentary, to the dynamic landscapes of Kofi Agorsor, punctuating urban Ghanaian life, to the fresh multiple identities present in the concept photography of myself and Josephine Kuuire, the art fair was a welcomed addition to the event's programing. The fair also was an attempt to tap into the growing commerce base that African art is garnering globally, especially through auction houses and galleries that primarily operate outside Africa. However, in typical CHALE WOTE spirit, the fair was structured in the same vibrant energy that street art possesses, engineered to level the field for artists to be able to profit off their work without having to go through exploitative gatekeeping.

Another highlight of the festival experiences was The LABs, a series of panel discussions, workshops, performances and mixers which serve as an activation session for artists and the audience of the festival to ponder on the work to be presented at the main festival weekend in James Town. Over the course of four days across two satellite locations, almost all the participating artists got share their respective stories, either through a short panel discussion, a workshop session, film screenings or performances.

Indeed, for many core followers of the festival, The LABs have become an unmissable favorite as it greatly facilitates a lot of skills sharing and networking opportunities. British artist and Lord Mayor of Bristol in the UK, Cleo Lake, for example, facilitated a dance workshop at the LABs, taking inspiration from Bristol's history and heraldry alongside Dahomey dance vocabulary from Benin. She then incorporated the participants of the workshop into her performance at the festival. American/Barbadian artist April Bey also returned to the festival to show a new series of print work titled Made in Space, using a unique printmaking technique which she developed and taught at The LABs last year. For many art enthusiasts who may not know how to access knowledge bases to improve their own narrative through creativity, The LABs has become the perfect springboard.

For the main festival weekend, the James Fort Prison and the Ussher Fort Prison, two historical edifices that had remained closed for the past decade, were reopened as exhibition spaces to augment CHALE WOTE's existing community spaces.

El WARCHA, a design studio based in Tunisia, created a series of bamboo structures to serve as seating for the Highlife Café music stage. Their work, which was created over the course of five days with the help of the Jamestown community, directly addressed one of problem CHALE WOTE had faced over the years which has been seating.

Stage director Charlotte Brathwaite (Canada/UK/Barbados), along with her collaborators Abigail DeVille, Jennifer Newman, Ryan Brathwaite, Paul Lieber, Sheila Chukwulozie and Nii Arde Nkpa, also created a riveting site specific performance installation inside one of the main halls of the Ussher Fort Prison, titled within the sand and the sea: a meditation on lost and forgotten places and people. This collaborative project, like most of the site specific work at the festival, sourced its core from the living history of the prison—which is an important bookmark in Ghana's history as an institution which held the enslaved in transition, to various political prisons at pivotal points in our liberation struggle from colonialism and neo-colonialism.

For something as powerful as CHALE WOTE, which manages to bring over 40,000 people from across the world to witness the work of about 125 artists over one week in Accra, Ghana, its impact is the proof of the power of independent cultural. The festival has completely transformed discourse on art in Accra, from a prop for the lives of the rich to a tool to counter economic and social injustice.

James Town is now an important site for creative culture as some of the residents have used the festival to grew their own art practice and also take advantage of the economic opportunities CHALE WOTE brings each August. This power produced by the festival is sustainable by the immense love that the festival producers and the community supporting it have for the festival. As long as the power remains accessible, CHALE WOTE will continue to impact and transform human expression in ways beyond established parameters, just as the theme for this edition, PARA OTHER, calls for.

Hakeem Adam is an instinct creative in love with beautiful sentences and the angst of communicating complex ideas in poetry. He frequently expresses this angst in simple sentences on his blog. He also loves to talk about African film and music classics on his platform, Dandano. Keep up with Hakeem on Twitter at @mansah_hakeem.

1. SOURCE by Regina Magdalena Seblad (Germany), a performance piece with five other women from all the continent. Photo by OBE Images via ACCRA [dot] ALT.

2. Festival-goers posing in front of a piece by Kofi Agorsor at the opening of the SHIKA SHIKA Art Fair. Photo by Abdul Arafat via ACCRA [dot] ALT.