Check Out the Next Chapter in the African Superhero Universe ‘Yemoja: Rise of the Orisha’ 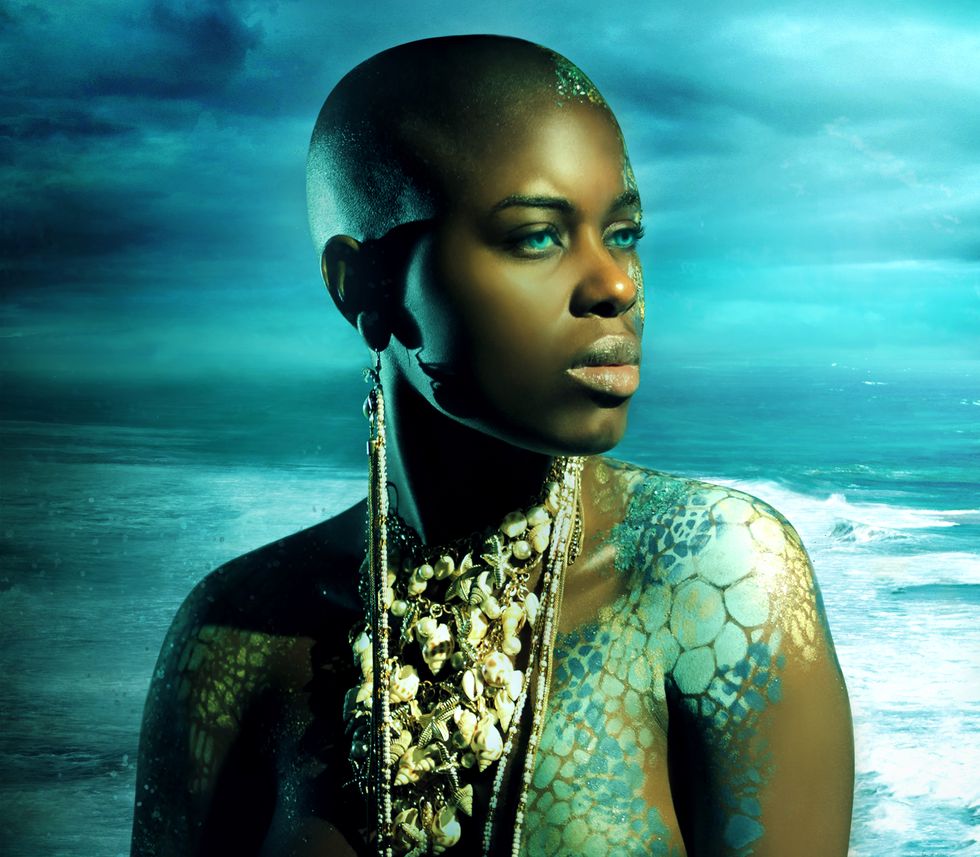 Nigerian-British filmmaker Nosa Igbinedion presents new webseries Yemoja: Rise of the Orisha. It builds on the momentum of last year’s 12-minute short film Oya: Rise of the Orishas, which won the budding creative the prestigious 2015 Screen Nation award for Rising Talent and garnered more than 500,000 views.

The next chapter, focusing on Yemoja,“orisha of the ocean,” follows the turbulent story of neurotic, junior doctor Amina who’s life is turned upside down when her patient, a politician’s son, dies under her care. The matter is further complicated when Amina is haunted by visions of orisha Yemoja, causing her to lose her perception of reality, and detach from her Christian faith.

Starring raw talents Symara Templeman (Amina) and Derek Oppong (Venus vs. Mars) as well as award-winning actress Yvonne Hays, the series is a precursor to feature-length film Rise of the Orixaz, executive-produced by Tim Reid, that will feature Esosa E of steamy television and web series An African City.

Unfurled in six, seven-minute original episodes that Igbinedion self-financed through his production company Igodo Films, the supernatural thriller premiered July 31 online in English, Portuguese and Spanish—the latter two languages were selected because they are commonly spoken among the people for whom West African spiritual traditions have taken root.

I caught up with Nosa, who is based in London, over Skype ahead of his web series' premiere to learn more about Yemoja: Rise of the Orisha and his vision for his fictional, cinematic universe that imagines what if the pantheon of West African deities were the saviors?  See what he had to say. This interview has been edited and condensed.

Erin C.J. Robertson for Okayafrica: For those who are less familiar with West African spiritual tradition, who are the orisha, and more specifically, who is Yemoja?

The breakdown of it in terms of the etymology of the language is ori is head and orisha means guardian of head, the head guardian. The idea is they're almost like guardian spirits. There's a belief that the spirit and the destiny of a being, like many different traditions is located within the head, so like, you know, the Bindi in Hinduism, or the halo, and so forth. Basically, the orisha themselves are a pantheon of deities, of almost like guardian spirits. The way I've been taught is they're there to see humanity through humans themselves to see their destiny and find their destiny. They're the people, the children of the orisha. They consult upon these orisha for their help, for their wisdom, for their guidance. Each of these orisha are also sort of related to the natural world, such as water, fire, war, technology, et cetera.

Yemoja is the orisha of the ocean. She is the mother orisha. In some tellings of the story of the orisha, she gave birth to the orisha. She is a healing energy. She is fiercely protective of her children, and usually is sort of seen as quite a beautiful, gentle orisha, but at the same time there are stories of how she can be very forceful if need be. I would say she's almost the embodiment of femininity, of African womanhood and femininity.

Why do you focus on Yemoja? What kind of understanding do you hope those who watch your webseries will gain?

I think it was necessary to make this whole Rise of the Orisha series, because I felt that there had to be a new kind of representation of African spirituality and Afrofuturism employed which I hadn't really seen, wasn't really seeing. I wanted to show the world this magnificent culture, but also I wanted to show it in a way that was appealing to young people. A lot of people have an idea that African spirituality culture is backwards, which I think is BS because you can go to many different places around the world and see cultures thriving alongside a technological environment. That was one thing which I wanted to do. I've seen movies like 300 and so forth and I always thought to myself, why can't there be something for our culture like that? That was sort of my impetus. So I made Oya: Rise of the Orisha which was a taster for this whole universe.

I think after making Oya: Rise of the Orisha, I decided I wanted to make something based on the orisha which went a totally different [direction]. Oya's sort of energy lends herself to be in an action-packed sort of superhero movie, whereas Yemoja is more mystical. It's a lot more esoteric on face value, to be honest. I was very into dream states and alternate realities and so forth, and Yemoja is an esoteric, sort of mystical nature and I decided that was one of the reasons why I really had to make a [webseries] based on her.

What kind of web series is Yemoja: Rise of the Orisha in terms of genre?

I would say it's a supernatural drama. Therefore I felt that it would be a good opportunity to really play with the overriding genre of a superhero narrative, but in a different way. Yemoja is something which I think people are not going to expect because it’s this mystical psychedelic movie. It has moments where it seems like we're in the real world, and then you know, we just rip you away. We take you to another world. It plays about with that quite a lot.

How did you come up with the plot-line for Yemoja? Why focus on a neurotic doctor? Can you explain more about what kind of journey you're taking your audience on?

There's a young Nigerian girl who has been raised Christian, but she has a connection to this ancestral spirit, this orisha called Yemoja. I wanted to tell a story which went inside of the mind of a character and really play with what they were thinking and what was real and what wasn't real, and what was just another level of consciousness and novel reality. One of the biggest aspects of the story is the clash between Christianity and this religion, Ifa, Santería, et cetera. I've always been really fascinated by the clash between the religion because in many places it was illegal to practice Ifa, so people had to disguise it and had to synchronize the religion with the saints, so Yemoja became the Virgin Mary and so forth, but it's still the same person that they're praying to.

[The storyline] has an interesting way that it develops because the doctor is Christian and like many Africans or many Nigerians, Christianity is really strong. A lot of Nigerians right now actually, when it comes to Ifa and African traditional religions, they look down at other Nigerians. I don't want to say oppress, but they ostracize a lot of people who practice the faith or the religion Ifa. I wanted to kind of flip the script and say okay, let's look at it from another perspective.

What do you think makes this religion so powerful and alluring for people around the world? Like you're saying, it's 100,000,000 people and it's continuing to grow. Particularly, you mentioned Brazil and Cuba and Nigeria, that they each have their own versions of this concept of Oya and orisha. Where does that come from?

Orisha are connected to nature, and we are connected to nature, so therefore it's a lot more accessible. You know, for instance you can go outside and you can feel the wind upon your skin, and you can think of Oya or Oyansa as they say in Brazil. I think it's undeniable, and that's why the reasons why people are connecting to it more and more, because it's not doctrine. It's not you know, force. It's just nature, you know?

Can you speak more about the comparison between Yemoja, this project, and your previous projects? For people who are familiar with your work, how will they be excited about this new project?

I think people should be excited about this because this is the birth of the first African superhero universe. This is taking this culture and making it accessible globally. That's my vision and that's my goal. I wanted to create a universe that was accessible in future forms, in comic books, in video games, because that's the way that people consume culture today. Oya was a taster to show that there was an audience and prove that there was an audience for this.

It's almost like if you imagine when Bruce Lee or people came to the West with Chinese culture and showed everybody about these mystical dragons and this whole culture that people got really excited about and said, hey, we want to find out what this is and everybody went onto titles like Karate Kid. That's kind of the cultural impact I believe that African culture and orisha culture can have amongst people, and kind of that's my impetus for doing this.

Fast forward 10 years, 20 years from now, how do you hope that your web series, feature film and comic books that will shift the stigmatized perception of African spirituality in a more positive direction?

I definitely think in the world right now, there's an awakening to systems that have kept us in a particular sort of mentality. I'm talking about human beings generally, for millennia. I want to be part of that and I want to add to the human story. The African voice hasn't necessarily been part of the human story a lot of the time. I want it to be a thing in the future where these African folktales and spirituality are not looked as something like, why are you doing that? It's looked as, you know, this is amazing.

The impetus for me in terms of making this whole thing was that a lot of people were complaining, 'hey, why do we only see African characters in a particular light like in Training Day, gangster or in slave movies, et cetera?' My thing was I'm going to add some sort of diversity to that. I want to show that we can see ourselves in a different way.