In 'Chewing Gum,' Making Sexual Choices is Liberating, Even if First Times Aren’t All That 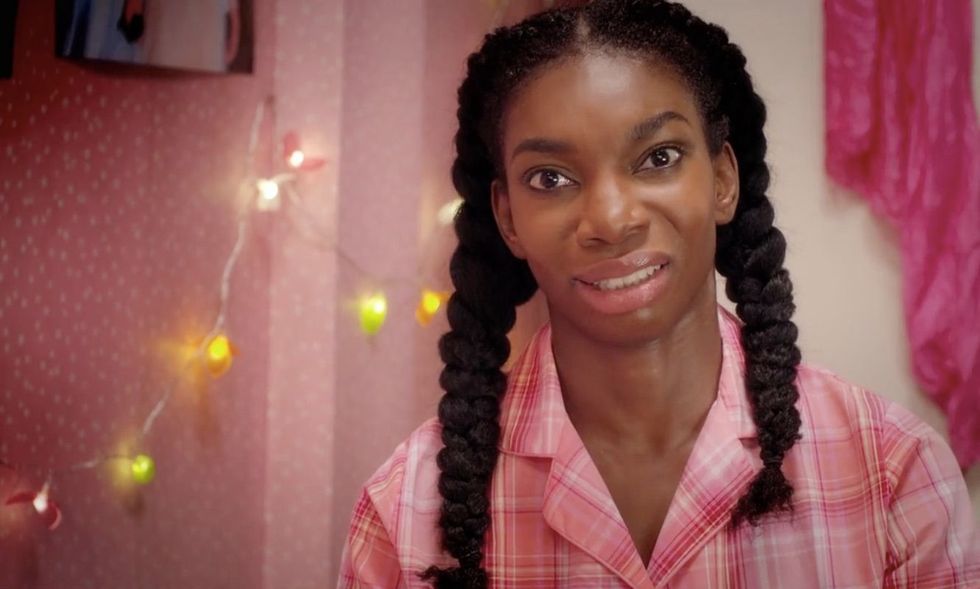 Here's how the second season of 'Chewing Gum' reframes the conversation around virginity.

Warning: This essay is overflowing with spoilers. If you haven’t finished watching the second season of Chewing Gum, bookmark this article, check out the 9 things we learned from the Season 2 trailer, and come back later. If you like being spoiled, read on, playa.

“I can have sex with anyone. With everyone! I've just gotta ask,” said Tracey, after she realizes that the reason why no one has initiated sex with her is because women have to approach the guy (or girl) first at the sex party she’s attending.

The discovery of the sex party's rules empowers Tracey, and she’s suddenly ready to see just how awesome the power of choosing your sex partner can be. But it isn't the way she wants to lose her virginity. Tracey decides to turn the whole party out, first giving a speech about her self worth, remarking on how lucky anyone would be to get to know her before having sex:

“For the first time in my life, all I can do is aim and click a finger and I can have anybody I want. And I don't want to! You don’t see me. My charm, my personality, how I look like Beyoncé...from certain angles!….I might wanna bang some of you, but I just want to know who I'm banging.”

Then inspiring everyone to play volleydildo—same as regular volleyball, but replace a sex toy with a ball. This scene is one of the best examples of Tracey’s adorable, down to earth personality, expressed through the running theme of the show: exploring sexuality. We know that Tracey can get out of awkward, unwanted or uncomfortable situations through the use of comedic gestures—it’s what we love about her. We also know that, as much as Tracey wants to have sex, she hasn’t come across the right moment or person yet.

Tracey is so excited, so anxious to have sex that she doesn’t let things organically happen. It’s admirable that she goes after what she wants and believes in, but her horniness causes her to make some bad decisions or choose the wrong guy. Yet, I find this refreshing, because we don't see honest, humorous scenarios about virginity and choice on tv involving a black woman. And—spoiler alert—a lot of women can say they didn’t lose their virginity to the “perfect” guy, or that their first time was amazing. I am one of those women. There are some who have had great first times with great people, but I only know few women who can relate to that.

Tracey has been using her right to choose whose penis should enter her vagina since day one. She hasn’t been successful, though. Tracey wanted to have sex with Ronald, of all people: he’s her ex boyfriend that found her utterly repulsive.

Then there’s Connor, her more compatible love interest. Although their connection is undeniable, they have also run into their fair share of circumstances that prevented them from getting it on: different expectations in their relationship, living at home, and most recently, homelessness.

"Chewing Gum reframes the conversation around virginity, by negating the cultural ideas that first times have to be perfect."
In the first episode of season 2 called “WTF Happened?” we learn that Tracey and Connor were so close to having sex in the bathroom of a homeless shelter, but Connor couldn’t get it up. Then Tracey threw up on him (chunky, cheeto colored goo erupted from her face and onto her body and Connor’s shirt. Sorry, I love details) and the mood was completely ruined.

A new possible sex buddy is introduced, a white man named Ash. He's attractive, has a job and seems nice enough, so Tracey is open to dating him. Things get hot and heavy back at Ash’s place, until he takes off Tracey’s bra and remarks on her “black titties.” He then proceeds to give her the most racist dirty talk I've yet to witness: “do you want my white dick in your black pussy? In your black mouth?” And almost calls her “nigga.” Definitely a Get Out situation.

As much as society wants us to believe that a woman’s worth is in her virginity, or that the number of people we have sex with determines if we are a hoe or socially acceptable, it also enforces the idea that our first time will inevitably be painful, and that the first person we sleep with will inevitably hurt us, because virgins are “clingy” and we’re bound to get emotionally attached, thus heartbroken if the relationship ends. These are all notions me, and several of my friends growing up, were warned of. It created a culture of shame amongst us, and we blamed ourselves when the relationship with our “devirginizer” fell to pieces.

So this is the conundrum: women are damned if we have sex too soon or too much, and damned if we don’t. We shouldn’t expect the first guy we sleep with to be impeccable, to care about our comfort and pleasure or not to break our hearts; but we should also be aware that our worth is in our virginity, and we should “give” it to someone worthy. Do men experience these same expectations around their virginity? Hell no. Virginity is what girls and women are pressured to lock away for as long as possible. Virginity is what boys and men must get rid of as soon as possible.

But Tracey isn't the only one who's ready to have sex. Cynthia, Tracey’s sister, becomes increasingly curious about her sexuality as the show progresses, but while Tracey’s sexual journey is filled with trial and error, Cynthia’s is meticulous and research oriented. Both women come from a strict, sheltered, Christian household, so watching them embark on their own sexual paths is intriguing, especially since they are so different.

After Cynthia does some online research about sex, and visits a liberal church where she realizes that having sex won't make her a bad Christian, she dresses up, goes outside and finds herself a man to sleep with. She doesn't even go far—maybe a block or two away from the estate—before finding a potential partner, Ryan. They have sex: it's technical and quick, which left me worried that she didn't enjoy herself. But, they get the job done, and when he asks to nap with her, she refuses: “I read that falling asleep together can create an emotional attachment with women, and I have no desire to see you again.”

Tracey is even more inspired to lose her virginity after she learns Cynthia has. She’s attracted to a young man from the book club she attends, and soon they go to his place to read together. Instead, they read each other’s bodies (aooow). While they do it, she goes through a range of emotions: happy, overwhelmed, sad, conflicted, and sings a song she's prepared for the moment. When it's over, Tracey learns that he's only 16-years-old. Guilt ridden, she turns herself in to the police, only to find that having sex with a 16-year-old is legal in the U.K.

Both men the sisters chose weren’t good choices. Ryan, the man Cynthia sleeps with, turns out to be their step brother. Tracey discovers her guy is only 16. They’re both disgusted when they find out the truth about their men, but it doesn’t shatter them. These guys are only one step in their journey to sexual awakening: there’s so many other people for them to experience, if they want to. This is one of the many lessons Chewing Gum teaches us: that mistakes happen, even when we think we’re making the right choice, but they don’t define us. Just pick up another stick of gum and chew on.