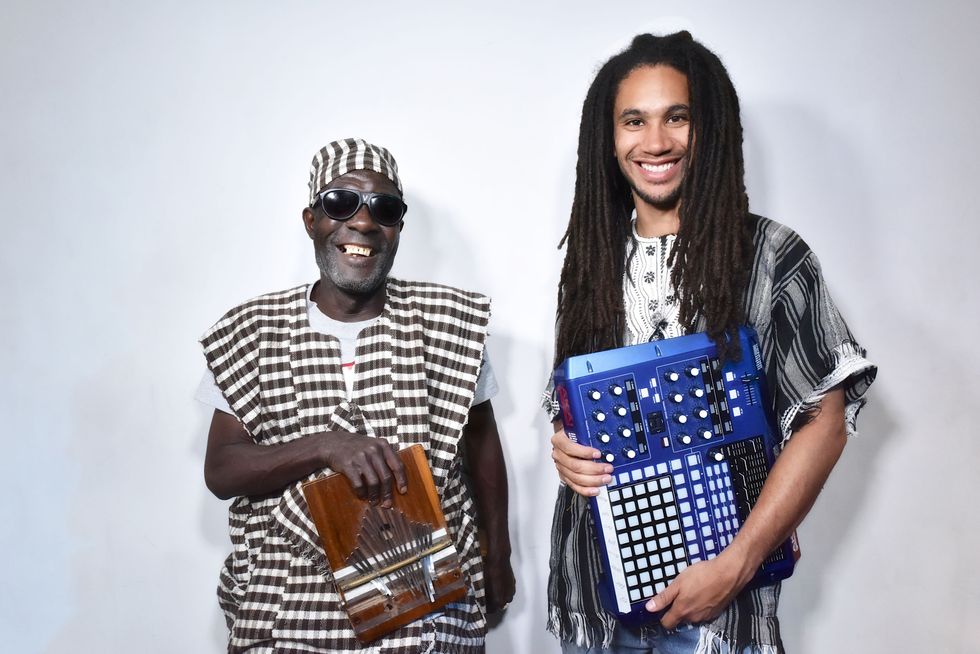 We catch up with one of our favorite DJs and talk about his new project with Sierra Leonean thumb piano player Sorie Kondi.

Their debut album, "Salone," which was released last week, uses the traditional Sierra Leonean sounds of the kondi to power contemporary beats that aspire to appeal to both local audiences and an international black music movement, as well as a more global market.

From an office in Bogotá, we chatted with Chief Boima, who was in Brussels for Kondi Band’s European tour, to talk about the new album, the International Black platform and WhatsApp, among other things.

OkayAfrica: How did Kondi Band come to be?

Chief Boima: Sorie’s manager called me because I had done a bootleg remix of one of his songs and I had put it online. He asked me if I wanted to do more work with Sorie. He mentioned that Sorie wanted to tour abroad and since I had a connection to SXSW, we set that up. He [unfortunately] didn't get the visa in time to make SXSW, but we still did a tour of the East Coast in 2012. We did a Kickstarter to raise the money for the visa and the plane ticket, and we got him to the States, where we recorded, and that's how the Kondi Band was born.

OkayAfrica: How did you find out about Sorie’s music?

CB: Banker White, who was one of the directors of the Refugee All Stars documentary, showed me the video for Sorie’s Without Money, No Family and I instantly was drawn to it. It was something unique for Sierra Leone. Nigeria, Ghana, and even Senegal get all the attention, and Sierra Leone music rarely does. I thought it was something from our culture that I could represent by vibing into the bass world. Now, I consider him to be the number one “cultural music” producer, because he’s trying to bridge the gap, to update the music for local audiences, more than I am. I think it's a good partnership, he's able to keep this music alive and I'm able to work with him to maybe bring it to other audiences.

OkayAfrica:When you were making this record, did you have any set goal about what you were trying to achieve with your music? Were you trying to appeal to a local audience, or did you have a more global market in mind?

CB: I think Sorie Kondi is definitely appreciated at home. But it’s like in Colombia, I'm sure you can relate: A lot of music from the Caribbean Coast maybe 50 years ago was overlooked as folkloric, like mapalé and bullerengue, and now it's being incorporated into young people's sounds. And it had to do with what was going on in Europe and North America, people finding this music and putting it in house and techno. If I could do for Sierra Leone what happened with Colombia, then I would say that that would definitely be a goal. Have the international market and the local market simultaneously in mind.

OkayAfrica: Yes, I definitely can relate. I can hear a lot of traditional music I listened to in a lot of new things. Ondatrópica’s  music is based on the exploration of old Colombian records, for example.

CB: We're not really related to the reissue scene, musically, at all. This music is very contemporary, it's very 2017, it's not 1976, but I appreciate that music too. That's the music I grew up on and I appreciate being able to share stages with veterans.

OkayAfrica: Right, I’ve been to shows here recently of bands that I think hadn’t played together in maybe 30 years, but they’re suddenly touring again because their vinyls got rediscovered, especially early champeteros like Abelardo Carbonó.

CB: This is the same thing that's happening with the reissue culture in Europe, right? I'm on stage with these guys in their 60s and they're touring, and they are still really good. European audiences— it’s problematic, but I think you totally get the context just from being in Colombia which is fascinating.

CB: We definitely wanted to promote this as a continuation of Sierra Leonean music with an international influence, like Refugee All Stars or Janka Nabay, but maybe in a different scene. Sierra Leonean pop is very influenced by what's going on in Nigeria and Ghana and that was another impetus for me to take something that was uniquely Sierra Leonean to bring to the table, so people can get proud about it, which is something that, being a small country, has been harder to do. Besides Kondi Band, I hope to release some of Sorie’s stuff internationally and bring his profile through the International Black platform that I started.

OkayAfrica: And what's exactly the International Black platform that you started?

CB: Well, it's just a platform for me to be able to promote music from different nations that share a racial identity. Whether that's employed in a place like Brazil, where blackness is contentious, or Sierra Leone, where it's more of a foreign concept, but has influences from hip-hop and a historical Black Atlantic in a different way. I'm interested in exploring by bridging gaps across nations. For example, one of the projects that we're working on now is a single collaboration between a Guatemalan artist and producer of Garifuna descent, Rico from Los Rakas, who is Afro-Panamanian, and myself.

OkayAfrica: And is this platform manifested in the album?

CB: Yeah. The most specific, easiest way to describe it is continuing this idea of international blackness. Each song is referencing a different part of the Black Atlantic in my mind, I’m borrowing from U.K. sounds, from Chicago techno, these things are connected through culture and this is the Sierra Leonean version of it. Freetown is a very cosmopolitan black Atlantic city that has influences from the Caribbean, influences as a port for free slaves from the British Empire and captured ships after the abolition of the slave trade. There are people from all over Africa and all over the Americas that make up the culture of Freetown. I want to make a statement about the identity of the country as a cosmopolitan place.

OkayAfrica: I’m also curious, I know you grew up in the U.S. and that you have family from Sierra Leone, so do you identify as Sierra Leonean?

CB: Well, the side of my family that’s Sierra Leonean is everywhere, they live in the States, in Scotland, and so on, so it’s a more international, global experience. Also, I have moved a bit. I’m living in Brazil now, so every time I get to a new place, I feel like I add something to my identity. And I’ve been using WhatsApp a lot to communicate all over the world, it feels like I’m not limited. I think I have the citizenship of Whatsapp [chuckles], maybe that's the best way to describe it.

Okayafrica: So, do you also get family memes on WhatsApp?

OkayAfrica: I put up with that so I can keep my five groups to organize soccer games.

CB: That’s probably the best use you can give it.

You can stream the album below or download it here.