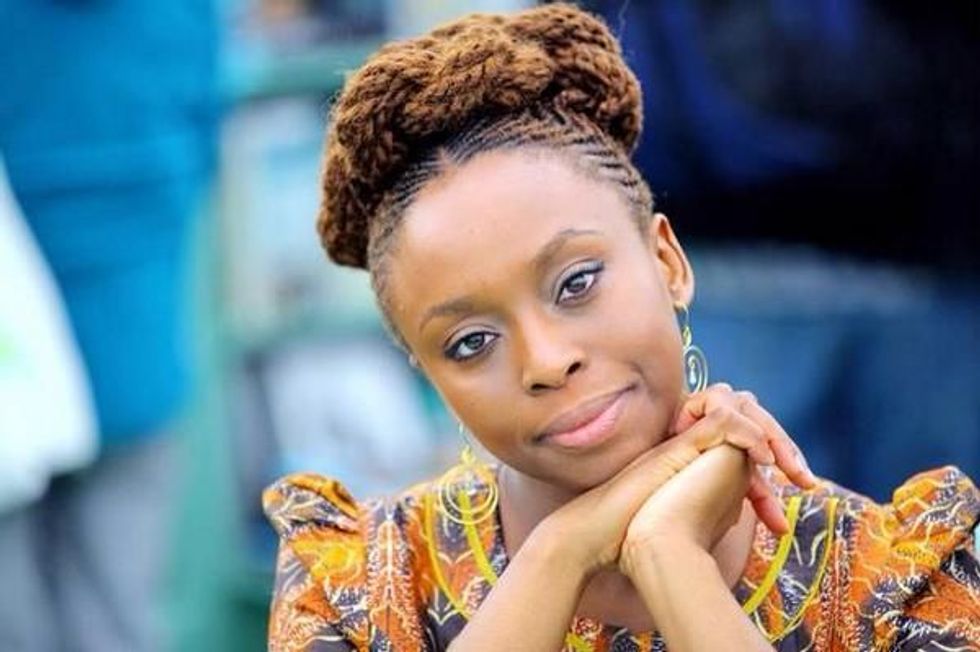 Chimamanda Adichie's letter to a friend on how to raise a feminist, has been adapted into a short book entitled 'Dear Ijeawele, or a Feminist Manifesto in Fifteen Suggestions.'

Last October, Chimamanda Ngozi Adichie shared a 9,221 word feminist manifesto, via Facebook, in the form of a letter to her friend Ijeawele, who had just given birth to a daughter and sought Adichie's advice on how to raise her as a feminist. The letter was widely shared, and has now been extended and adapted into the author's latest book, Dear Ijeawele, Or A Feminist Manifesto In Fifteen Suggestions.

Adichie, who has a 15 month old daughter, offers rich parenting wisdom through a set of tips aimed at helping mothers and fathers raise empowered children. She sheds light on an array of topics including the pressure put on girls to have presentable hair, the importance of gender-neutral toys and the rejecting of marriage and likability as necessary achievements for girls. The book also thoroughly explores the misuse of the word "feminism."

"We have to name something in order to fix it, which is why I insist on the word feminist or feminism.” Adichie says. "Many of my friends who are not white will say, ‘I’m an intersectional feminist,' or ‘I’m a womanist.’ And I have trouble with that word, because it has undertones of femininity as this mystical goddess-mother thing, which makes me uncomfortable. So we need a word. And my hope is we use ‘feminism’ often enough that it starts to lose all the stigma and becomes this inclusive, diverse thing,” she tells The Guardian.

In Dear Ijeawele, the feminist icon offers invaluable insight in a way that only she can. Read and excerpt from the book below, via The Guardian.

Be a full person. Motherhood is a glorious gift, but do not define yourself solely by it. You don’t even have to love your job; you can merely love the confidence and self-fulfilment that come with doing and earning. Please reject the idea that motherhood and work are mutually exclusive. Our mothers worked full-time while we were growing up, and we turned out well – at least you did; the jury is still out on me.

In these coming weeks of early motherhood, be kind to yourself. Ask for help. Expect to be helped. There is no such thing as a Superwoman. Parenting is about practice – and love.

Give yourself room to fail. A new mother does not necessarily know how to calm a crying baby. Read books, look things up on the internet, ask older parents, or just use trial and error. But, above all, take time for yourself. Nurture your own needs.

I have no interest in the debate about women “doing it all”, because it is a debate that assumes that caregiving and domestic work are singularly female domains, an idea that I strongly reject. Domestic work and caregiving should be gender-neutral, and we should be asking not whether a woman can “do it all”, but how best to support parents in their dual duties at work and at home.

Beware the danger of what I call Feminism Lite; the idea of conditional female equality. Being a feminist is like being pregnant. You either are or you are not. You either believe in the full equality of men and women, or you do not.

Teach your daughter to question language. A friend of mine says she will never call her daughter “princess”. The word is loaded with assumptions, of a girl’s delicacy, of the prince who will come to save her. This friend prefers “angel” and “star”. So decide the things you will not say to your child. You know that Igbo joke, used to tease girls who are being childish – “What are you doing? Don’t you know you are old enough to find a husband?” I used to say that often. But now I choose not to. I say, “You are old enough to find a job.” Because I do not believe that marriage is something we should teach young girls to aspire to.

Do you remember how we laughed and laughed at an atrociously written piece about me some years ago? The writer had accused me of being “angry”, as though “being angry” were something to be ashamed of. Of course I am angry. I am angry about racism. I am angry about sexism. But I recently came to the realisation that I am angrier about sexism than I am about racism. Because in my anger about sexism, I often feel lonely. Because I love, and live among, many people who easily acknowledge race injustice but not gender injustice.

Teach your daughter to question men who can have empathy for women only if they see them as relational rather than as individual equal humans. Men who, when discussing rape, will say something like, “If it were my daughter or wife or sister.” Yet such men do not need to imagine a male victim of crime as a brother or son in order to feel empathy.

Teach her, too, to question the idea of women as a special species. I once heard an American politician, in his bid to show his support for women, speak of how women should be “revered” and “championed” – a sentiment that is all too common. Tell her that women don’t need to be championed and revered; they just need to be treated as equal human beings.

The book is available in stores staring today.

Do yourself a favour and head to your local bookstore to pick up a copy of this book immediately. #DearIjeawele#ChimamandaNgoziAdichiepic.twitter.com/c93xnXzrTy