Chimurenga's Chronic Returns With New Issue, 'Reform And Revolution: Destruction Of The University' 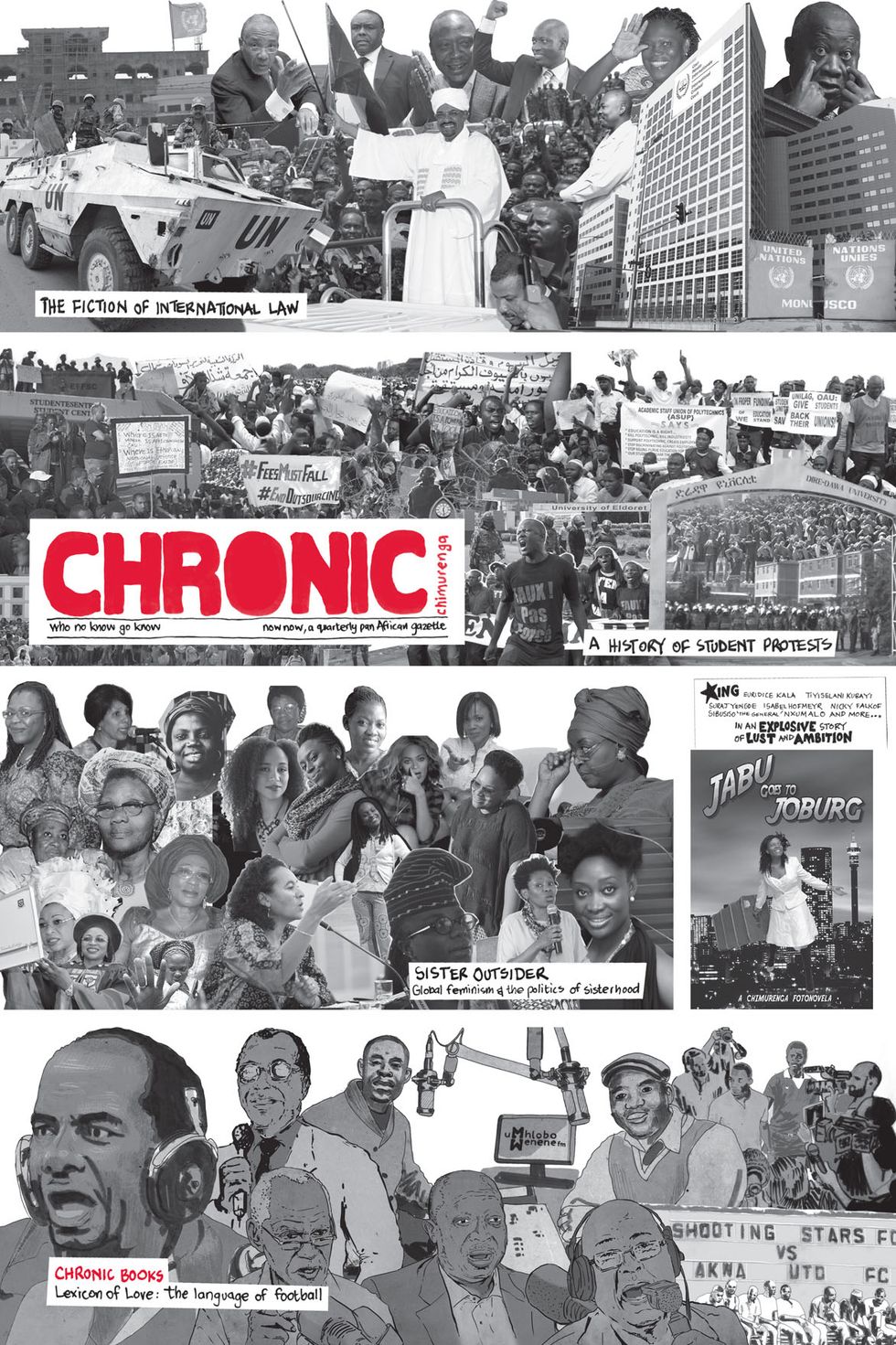 The latest issue of Chimurenga’s pan-African gazette, the Chronic, features stories on reform and revolution in South Africa’s universities.

Chimurenga's Chronic: 'Reform and Revolution: Destruction of the University' (Courtesy of Chimurenga)

Chimurenga’s pan-African gazette, the Chronic, returns this week with a new issue, "Reform and Revolution: Destruction of the University." Documenting historical events in real time (or now now as the publishers refer to it), the Chronic has consistently put out brilliant writing on African issues.

Head to chimurengachronic.co.za to pick up your print or digital copy. See below for a full breakdown of the new issue via the Chronic:

The latest issue of Chimurenga’s pan-African gazette, the Chronic, explores the tensions between reform and revolution, and decolonisation and the neoliberal order in the academy, through the lens of history and via the alternate education paradigms based in indigenous knowledge systems, and also arising from South Africa's radical anti-apartheid struggle.

The late 1960s witnessed a wave of youth uprisings and student protests of a rare intensity. In his essay on the gestation, articulations and manipulations of student politics in Congo during that era, Pedro Monaville explores the ways in which one particular massacre on a campus in Kinshasa ignited protracted protests and responses from the state that echo to this day in the physical and intellectual decay of the country’s tertiary institutions.

Writer and activist Frank B. Wilderson III draws from his memory of student protests in 1993 at Vista University in Soweto, a historically black institution – which has all but vanished from public memory – created in the early 1980s and run, in no uncertain terms, by the long arm of Afrikaner establishment.

Bwesigye Bwa Mwesigire visits a university in eastern Uganda, named in honour of the pan African giant, Marcus Garvey, seeking, through the philosophy of Afrikology, to reinstate and mainstream indigenous knowledge systems that were distorted by Greece and Rome. While Kwanele Sosibo travels to the University of Fort Hare in rural Eastern Cape, the alma mater of numerous African heads of state, and writes about a curriculum intervention called Life Knowledge Action that offers a unique “grounding” experience to all undergraduates.

Switching focus from the university to international diplomacy, Joshua Craze offers a sobering analysis of the United Nations in South Sudan, where civil war is the order of every day. The organisation’s peacekeeping mission, Craze argues, is based on the fundamental logic of the UN’s functioning: to recreate the image of its membership wherever it goes – regardless of context – and to enforce a neutrality that wilfully ignores reality and guarantees an inherently incoherent response.

Elsewhere, Ronald Suresh Roberts asks: What are the true stakes in the controversy over South Africa’s recent failure to arrest Sudanese strongman Omar al-Bashir? To understand these stakes clearly, Roberts argues, one needs to grasp how completely the West has abandoned even the pretence and the aspiration of holding itself accountable, in some distant future, to the system of rules it already imposes upon others.

Writing from Nigeria, Yemisi Aribisala rails against the new fundamentalism cresting the wave of global feminism sweeping her home country. She challenges the gender imperialism implicit in its aspiration to uniform ideas of celebrity, power, erudition and beauty. Speaking from her own everyday lived experience, she rejects the “distasteful vitriol” that characterises its social media discourse, and grapples to give words to meanings often unspoken about woman's power in Nigeria.

Football is the focus of the books supplement, Chronic Books. Not so much the game itself as the language produced in, around and about it. How football is spoken, written and narratively performed – from the informal commentary of bar talk, blogs, social media and stadium banter to more formal inquiries in mainstream media.

The language of football is arguably nowhere more verbose and loquacious than in Brazil – full of the picturesque and partisan, the witty and fantastical. It is where, as James Young writes, the nexus between the twists of life on and off the pitch is revealed.

Lidudumalingani Mqombothi revisits the football matches of his childhood, when radio, not television, was most people’s ticket to the beautiful game. But a radio was not the only requirement for a full experience – an active imagination and an attentive ear were integral to engaging in the virtuosity of the audio commentary.

Elsewhere, Moses März documents his fleeting orbit of the African football scene, from the Afcon 2008 tourney in Ghana to Angola in 2009 and the 2010 FIFA World Cup extravaganza further south. All in all it was brief, expensive, stereotypically Eurocentric and big on defeat.

This edition of the Chronic also features a photonovella titled “Jabu Comes to Joburg”, a classic South African tale re-imagined by Achal Prabhala.

Visit chimurengachronic.co.za to order the new issue of the Chronic.
From Your Site Articles
Popular