Meet ChocQuibTown, the Biggest Afro-Colombian Band in the World 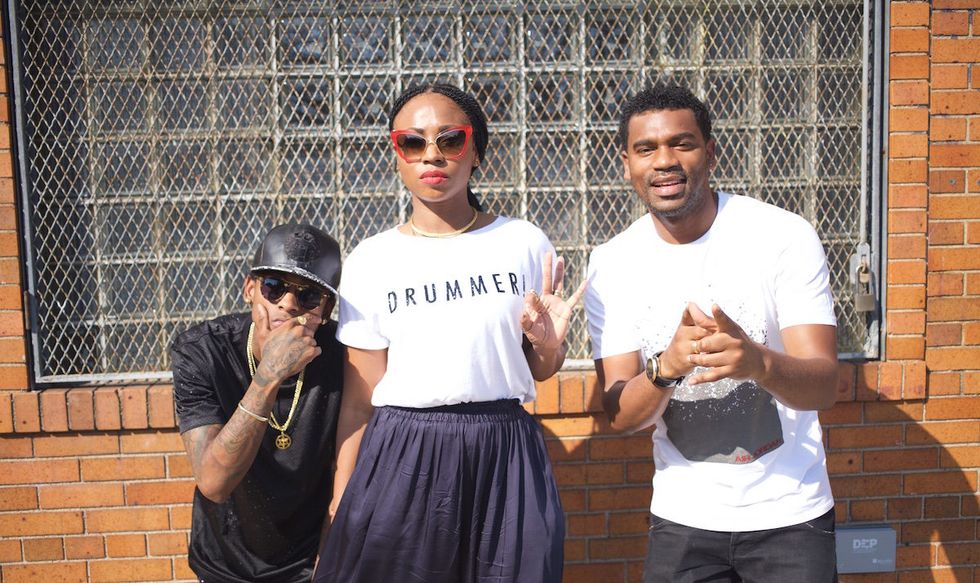 ChocQuibTown has become one of the foremost voices for Colombia's often overlooked Afro-Colombian community of the Pacific coast.

Gloria Martínez, her husband Carlos Valencia and brother Miguel Martínez step off a black SUV into the streets of Brooklyn. The three Colombian artists are in town to wrap up their American tour with a show in Central Park, in promotion of their latest album El Mismo.

Under their respective stage names of Goyo, Tostao, and Slow, the trio form ChocQuibTown, the biggest Afro-Colombian group out right now.

ChocQuibTown gets its name from the Chocó department and its capital Quibdó, a region along Colombia's Pacific coast that's known for its large Afro-Colombian population—and the place where all three of the group's members were born and raised.

ChocQuibTown's songs blend strong pop melodies and rapping with the Afro-Caribbean rhythms of Chocó and their handful of singles all average tens of millions of views on Youtube.

Over the span of a decade, the Latin Grammy Award-winning band has become one of the foremost voices for Colombia's often overlooked Afro-Caribbean community.

Below, we sat down with ChocQuibTown in our offices to talk about their music and Afro-Colombian culture.

Tell us about Chocó and Quibdó, where you guys come from, and their meaning within Colombia.

Tostao: Chocó and Colombia's Pacific region (el Pacífico) has been named the “Africa within Colombia." It's a region that, for years, has supplied a lot of rhythms to the country. It's where we grew up, were born and it's our source of inspiration for ChocQuibTown.

With ChocQuibTown, we wanted to get people talking about this region, which doesn't really get coverage on the radio or television. We wanted to tell our own stories so that they're also part of the daily story of life in Colombia.

Now, a lot of people more people are aware of Chocó because of this movement we've helped start.

Is there a fair representation of Afro-Colombian music and art in Colombia?

Goyo: I think it's a process. Some doors have opened but it's just starting. I think it's important that we're continuing this task, which wasn't started by us. For example, bands like Grupo Niche, a salsa orchestra that was very well known in the 90s, put the issue on the table and brought up the conversation of race. They opened up the path through music.

As I'm thinking about it, it makes me want to tell you our own group's path and how we went this route. There's a song called “San Antonio," which was our first song to play on the radio. It's a song that comes from an oral tradition and was used for funerals—like what they do in New Orleans, we also do in Chocó. It's got a close connection to Africa with the nature of the ritual.

Then we had “Somos Pacífico," which further introduced our identity and our region—the Colombian Pacific—to Colombia.

T: For the country, the Pacific region only gets on the news if there's something negative about it—corruption or crime. We stopped and said, wait, there's a lot more going on here and you only want to talk about the negative things.

We try and flip that argument and narrative to make el Pacífico more attractive and lessen the collective narrative about it being a negative place. Now, the Pacific region has become really strong and positive within the national story, which is something that we've always tried to promote. It's important that the rest of Colombia becomes aware of that.

We want all eyes on el Pacífico.

Is there a strong division between Afro Colombia and rest of the country?

G: There's a sense of inequality. It can be seen, economically, in the difference between the port of Buenaventura, which is in the Pacific, and the northern port of Barranquilla, which is favored by the government.

T:Peter Wade was in Colombia and wrote a book called Música, Raza y Nación—he explains that the central government always goes to the Northern Coast, not the Pacific coast. So they only take into account, in their government decisions, the Northern coast and not ours.

In these last year, Afro-Colombian society has understood this and is now looking for its own political and economic power to influence these decisions.

G: The problem has been a lack of opportunity. We live it through music ourselves. At first, we were only seen as a “cultural" band and couldn't get into mainstream or commercial music channels. There were only three black people on mainstream TV back then. And there weren't many references to black culture, apart from our soccer players.

Is there a conversation or movement equivalent to 'Black Lives Matter' in Colombia?

G: Afro-Colombian movements are more abundant every year. It used to just be us and our friends and, now, I feel a lot has happened politically, musically, and nationally. We see that we need to do the work for ourselves, since the government wont do it. Through that, there are a lot of movements and ethnic groups that look to create better vision for minorities.

There's a group of women from the valle called Chontudas—which is a negative way of calling someone with an Afro—this group took that name and made it their own. They approach young girls and make sure they don't feel bad because we don't have the usual aesthetic that might be seen across Latin America.

What other Afro-Colombian artists should we be on the lookout for?

T: There's a ton. If you go to Chocó and say “Afro artists" it's redundant because they all are. There's a lot in Cali, in the northern coast, in Cartagena, in Palenque. There are a lot that go through this line—like Alexis Play—who are trying to reclaim not just the “Afro" but the “African." They all try to bring up this conversation about ethnicity.

G: Not necessarily because they want to, but because of necessity.