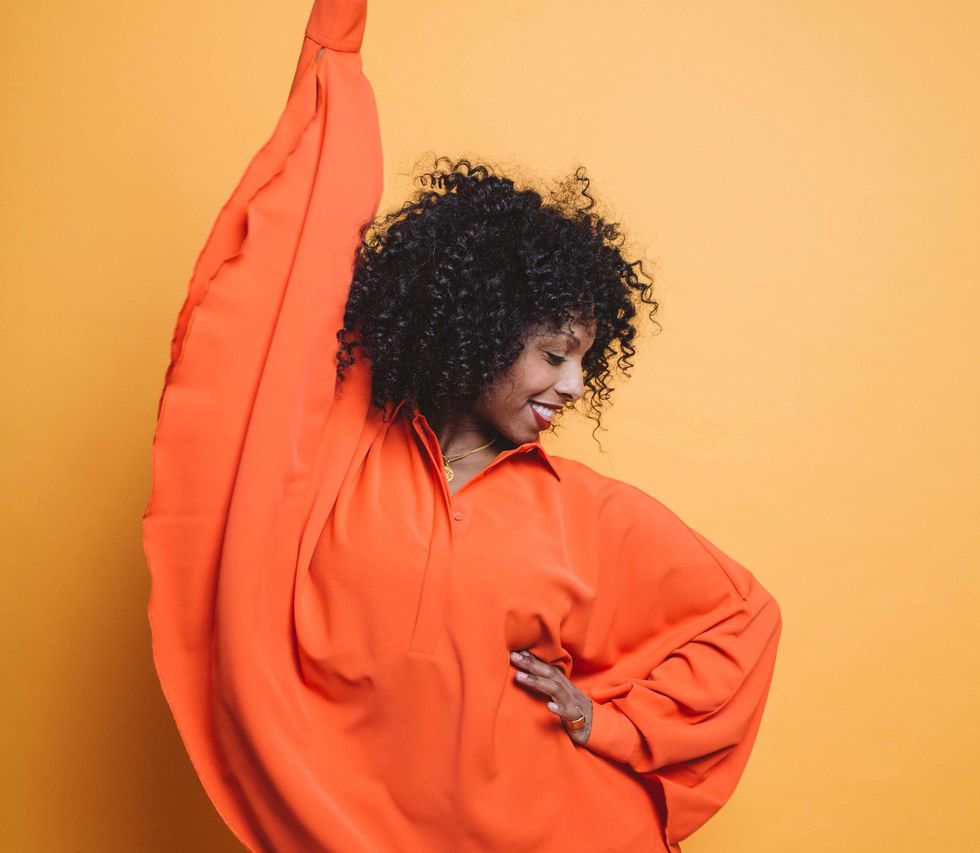 "I choreographed the power of the women in my culture into a dance performed by the biggest force in music. It was my way of reconciling my departure of what my culture expected of me (medicine) with a path they didn't understand (dance). And I did it in a way that would make them proud and take ownership." - Luam Keflezgy

Luam Keflezgy knows her body. She knows what angles will catch best in the flash of a photographer's lens, what coral tones will highlight her skin, what movement will make the black ringlets of her hair fall mysteriously over her face. She's a master of motion, the precision and care she takes to create stories through the body no doubt attributed to her medical school background. Her natural aptitude for dance is enough on its own, but with a touch of science about the human body, Keflezgy's choreography stands in a universe by itself.

Our photoshoot moves quickly. From the moment Keflezgy steps into the studio for the OkayAfrica 100 Women session, a hot pink sweater falling off one graceful shoulder, she turns on. The music—a constant stream of Afrobeats playing since early that morning—stops for the unmistakable Major Lazer sample followed by Beyonce's rallying call for women. "Girls! Who run this mutha!" Keflezgy steps seamlessly into performance mode for the camera, her moves serving as poses for the photographer. She not only knows this one, she created it. A fusion of hip-hop and her Eritrean roots, the now-iconic video got its signature moves from the woman right in front of our camera. Watching her move now, a balletic stretch of the arm to reveal her gold-ringed fingers, it's almost a wonder that the highly-demanded global sensation has time enough to spend an afternoon twirling in our space. Graciously, she smiles before changing into another look for another song. Another story in movement to be captured on camera.

It all seems so simple now. One of the most celebrated choreographers and artistic directors of our time (she's created for Alicia Keys, Rihanna, Janelle Monáe, Britney Spears, and more) appears to have spent a lifetime planning out her career in dance. Truth is, it wasn't until she was working in a career of technology in 2002—after undergraduate matriculation of medical school prerequisites—that she found herself unable to ignore the call to create stories out of dance. She got her big break at the MTV Video Music Awards, dancing atop a tour bus with Ludacris, courageously taking the jump and sacrificing the idea of corporate stability for her daydream. Also courageous was facing her Eritrean family, who very much subscribed to a traditional idea of success. That mindset, one that many African children and parents fight to navigate, is a generational one that has steered budding artists from the creation process in lieu of parental approval (and a steady paycheck).

Keflezgy is breaking those arbitrary and subjective generational expectations.

But this story isn't one about struggle or conflict. It's not about disappointing her parents and demonizing a generation who very much just wants the best for their children. It's about recognizing where they came from and not internalizing their fear. For Keflezgy, it just takes some understanding and some love to ensure that, moving forward, African youth are able to create and exist freely. It's about finding some intergenerational common ground.

In her own words, she tells OkayAfrica how she's inspiring a new wave of young people to daydream without limits while undoing that generational fear that can keep us beholden to a limited and capitalistic view of the world.

For me, investing in [youth] culture has many layers to it. There's a layer to it as a woman, as an African-born woman, and then as an artist. Those three layers are in by themselves their own journey, but if you put them on top of each other, it requires different things.

For me, where I am now, the reason that I feel I have to really invest in the next group is because of what I've been through. As an African-born woman… pursuing the arts is definitely one that I figured out by myself. I had to pave my own way, make my own mistakes many times over. I really feel it's important to arm the next generation with all the tools that I had. At least they'll have a chance. Right now, we are in this microwave society where you have to get there faster. People are skipping a lot of steps… they're in a rush. To keep [youth] from crashing and burning, let me give them as much information as possible, so whether or not they're in a rush, they'll have the right material, they'll know the right thing, they'll know how to build a business, they'll know how market, they'll know how to actually develop their artistry.

As an African-born woman, it will be about showing my culture and value of doing what I do just as much as if I had been a doctor, or I had been a lawyer… I really just try being an example for other Africans—whether born here or there—that if you have a passion, if you have something that you really believe in, and you're going to work, just work through it and show them in the results. And that's going to take a while.

Those three layers are ways that I really try to be conscious in and talk to young folks in the industry [about].

From a kid's point of view, for me, it wasn't even just that I was afraid that I would let [my parents] down [for choosing art]. I was afraid I was going to let myself down. So I shared some of their fears. We share those fears. What I tell people going through that—and it never ends, I'm still [going through that] even though my parents have been incredibly supportive—there's things that are hard-wired into their generation that you have to let it be. You cannot expect it to change. Once you expect it to change, you will be perpetually disappointed.

The only thing you can do is understand and comfort. Literally all you can do is understand and comfort and let your work, and let your ethics—one thing that no matter what both generations are doing, they both understand work ethic. They see you busting your butt, and if they see you learning new things and having fun in all aspects, they have no choice but to respect you. But if you keep that from them, they don't know enough to know that you're working this hard, or doing this much, or learning this much.

You've got to show them your work ethic. They understand that. You've got to respect that where they come from, this doesn't amount to strengths. And just comfort them. Just be like, 'Listen, I know this is not what you think... but look what I did today. I know you're not going to understand it, but I hope that…'

I remember when I got my first commercial, my mom was there. I'm like, 'Mom, look I'm on T.V.' I just can't tell her what I had to do to get there, you know what I mean? That was on me! She's like, 'There you go.' You have to find the things that they do understand. Definitely work ethic, definitely education, it might not be the same kind of education they're used to, but they've got to respect it, you know? They've got to respect it.

Afterwards, they'll realize that they know how hard they are. If you went through that and still make it, then they have no choice.

This "As Told To" has been edited and condensed for clarity